In December 2016, Old Salem executives realized there were so many more stories to tell hidden throughout the entire town, and that's where the Hidden Town Project came afloat. 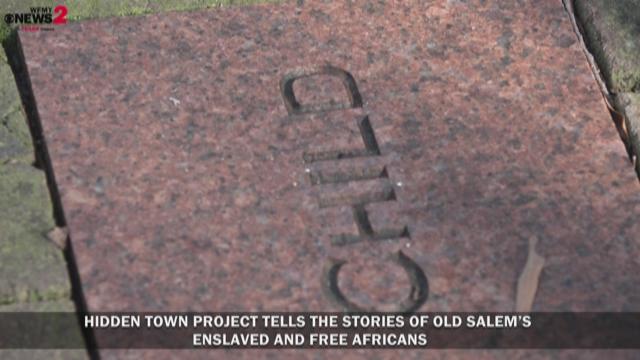 Stories Within The Story

The log building, a replica of the original church, is the most obvious celebration of African American culture in the grand scheme of Old Salem and its history, featuring interpretive depictions and information of some of the enslaved buried in the brick church’s grounds.

In December 2016, Old Salem executives realized there were so many more stories to tell hidden throughout the entire town, and that’s where the Hidden Town Project came afloat.

According to Cheryl Harry, co-chair of Hidden Town and Human Resources Manager for Old Salem says President & CEO of Old Salem Frank Vagnone was amazed by the records kept through the years that provided information of the enslaved that once lived there.

“It’s not the norm for most historic sites,” Harry says about the records.

From The Ground Up

The initiative focuses on archeological and genealogical research of those enslaved and free African Americans thanks to the detailed records kept by the Moravians that founded the town of Salem in the 1700s.

Online, Old Salem lists to goals for the Hidden Town are to:

The discoveries come with a bit of controversy, as the practice of slavery was frowned upon in Moravian Salem’s beginnings, but increased slowly nonetheless.

While touring the town, you can find posters of the Hidden Town project in specific areas where the narratives of these Black lives are being integrated, like the Salem Tavern.

The Tavern served as a place for non-Moravian visitors to stay, a key part of the mercantile prosperity of Salem in the olden days.

Among its most popular visitors, President George Washington during his tour of the Southern states.

When you walk through the Tavern owners living spaces, you’ll end up in the kitchen. As soon as you step in, look left, and you’ll find a wooden door leading to what may seem like simple attic space.

Going up the stairs, you feel there’s something more to it.

The room was once the home of slaves that worked for the Tavern owners, and their three children.

It’s now called the Meditation Room, a space designated to honor the enslaved who once lived and played a role in the creation and prosperity of the Moravian town.

Harry says the project has received a great response from the community.

“The response has been very profound, so many people are so excited to hear about this story,” Harry added.

The responses also extend to people calling from around the country trying to connect to their ancestry in Old Salem, such as a descendant of Robert Wall, who was part of the creation of the first “colored school” back in 1867.

An important genealogical discovery was the connection between Peter Oliver, a slave that purchased his freedom from earnings he made in the pottery business, to NBA player and former Wake Forest basketball star Chris Paul, who’s the six-times-removed grandson of the freed slave.

According to Martha Hartley, co-chair of Hidden Town and Director of Research and Outreach, Oliver’s story will play a role in the Creative Corridors project of the Strollway Land Bridge in collaboration with renowned landscape designer and architect Walter Hood.

Old Salem encourages the community to contribute and get involved with the Hidden Town Project by emailing Hiddentown@OldSalem.org.