Police in Pennsylvania and New Jersey are looking for Peter Manfredonia, who is wanted in connection with a deadly assault that killed a 62-year-old and 23-year-old. 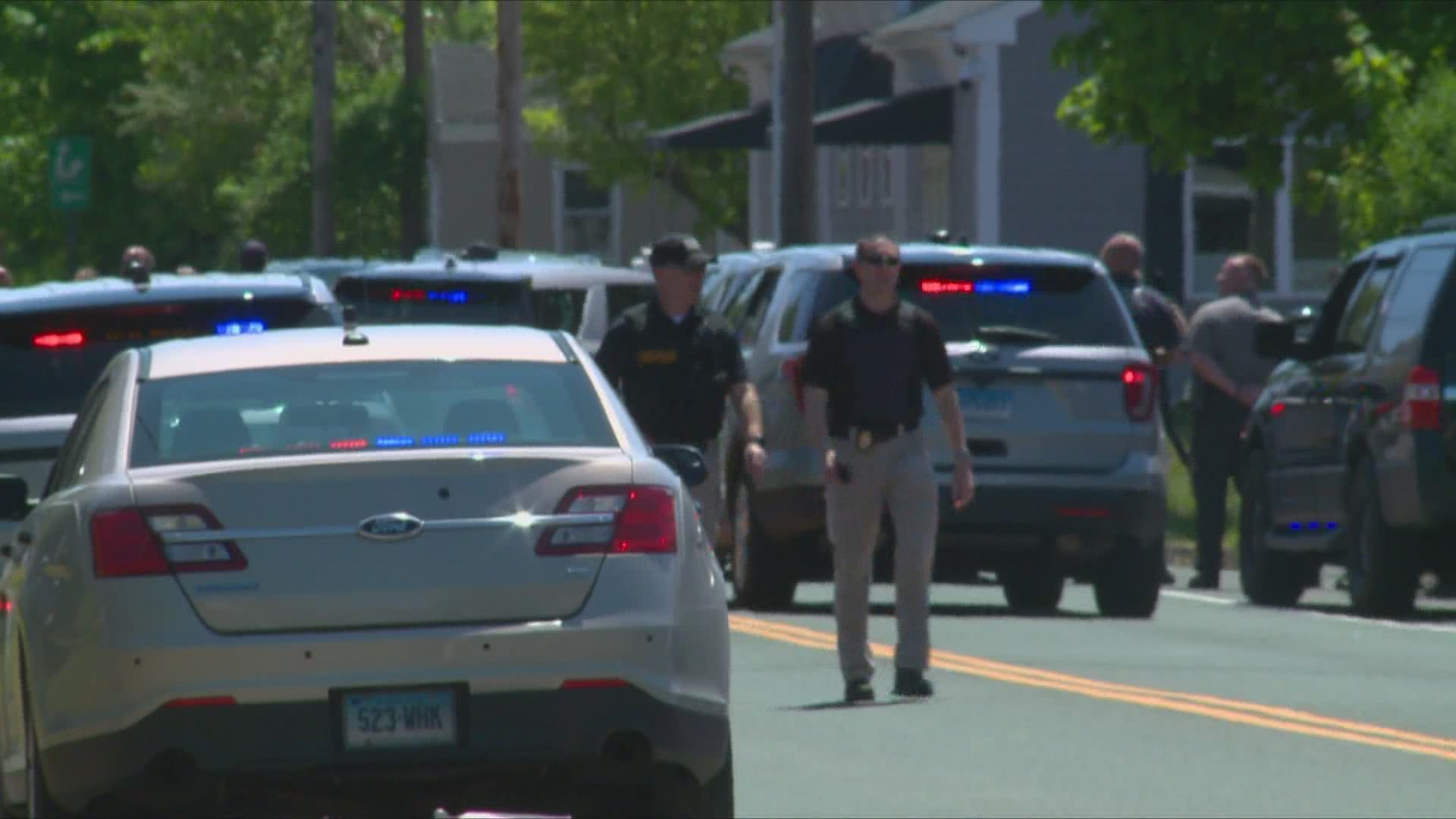 Connecticut State Police confirmed Wednesday night that Peter Manfredonia was found in Maryland and is in police custody.

Connecticut State Police Eastern District Major Crime was on the scene in Hagerstown, MD when Manfredonia was taken into custody.

Manfredonia was taken into custody in the area of a Pilot truck stop by US Marshals and the Washington County Sheriffs Office. Sources tell FOX61 that police did not chase Manfredonia when he was caught. FOX61 has also learned more than one Connecticut State Police member took him into custody.

Lt. Rebecca Fetchu from the Hagerstown Police Department discussed with FOX61 the capture and arrest of Peter Manfredonia. 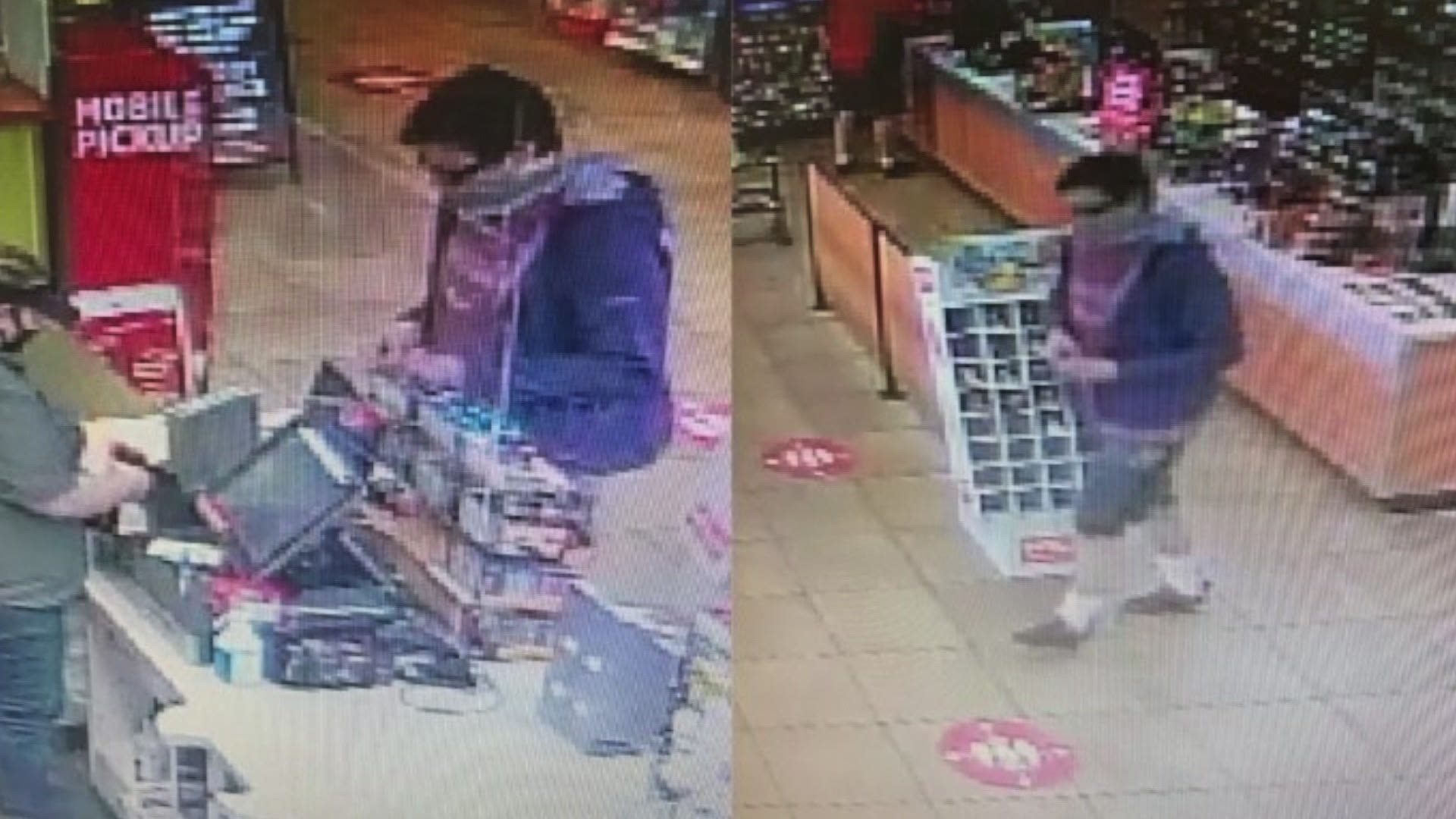 Connecticut State Police held a press conference in Hartford around 11:15 p.m. in front of Troop H State Police barracks. Police said Manfredonia could be facing state and federal charges, however, that remains to be determined. Officers found a gun in the area of his arrest they believe was used in the Derby homicide. No officers were hurt during the arrest.

Pat Jones, the sister-in-law of Ted DeMers who was killed in Willington, said that the "family is very relieved that he has been caught" and that "it was a blessing to receive this news after having just returned from the candlelight vigil for Ted."

The Manfredonia family lawyer Micahel Dolan released a statement on behalf of the family saying they are relieved Peter "has brought this to a peaceful conclusion."

Police will hold another press briefing on Thursday, May 28.

Police from several states, and the FBI in Pennsylvania, continue to search for Peter Manfredonia, 23, who is wanted in connection with two homicides in Connecticut.

According to a release, the wanted UConn senior was also possibly seen at a Sheetz in Chambersburg, Pennsylvania. Surveillance video captured a man who matched his description.

Pennsylvania troopers say that individual obtained an Uber and was driven to Maryland.

Maryland State Police told FOX61’s Angelo Bavaro Wednesday night, they are aware of the information given to them by Pennsylvania State Police and were notifying their own troopers. They released a brief statement:

"We are aware of the information issued by the Pennsylvania State Police and are following up with them. Our troopers are being notified of this and will be on the lookout for the suspect. Anyone who sees him should call 911 immediately."

He was wearing red sneakers and the black bag, believed to be filled with guns is still in his possession.

Police in Duryea, Pennsylvania said a member of the local fire department saw someone who fit the description of Manfredonia.

Duryea is about an hour northwest of East Stroudsburg, where Manfredonia was last sighted.

In a post on the Duryea PD Facebook page, officials said, "On Tuesday, May 26,2020 at approximately 11:15pm Officer Giles and PFC. Swisher were dispatched to the picnic grounds of Germania Hose company on Foote Ave for a suspicious person. When officers arrived on scene the witness a member of the fire department provided a description of the male who was carrying a large backpack who fled from the area towards the wooded area and railroad tracks. The suspect was hiding behind the dumpster to the rear of the property possibly laying behind the dumpster. The male didn’t respond to the fireman asking him what he was doing prior to leaving the scene. The description provided by the fireman was very similar to the wanted person from Connecticut.

PFC. Swisher called for surrounding departments to set up a perimeter and Chief Lohman responded to the scene. He notified Chief County Detective and set up a command post at the scene.  County detectives and PSP came to the scene along it’s the PSP helicopter also in the air assisting with searching the wooded area and railroad tracks.

After several hours of searching the area officers did not locate anyone. At this time we don’t have enough information to confirm it was the suspect from Connecticut but ask that residents be aware and cautious of their surroundings. We ask that residents be on the lookout for anyone suspicious or who matches the description of the subject. A white male wearing a cream or light-colored shirt and carrying a black duffle bag/backpack.

Residents are also reminded to keep your doors locked and your sheds and garages secured. If you see anyone matching the description please call 911 immediately and provide them with as many details as possible and direction of travel.

Here's a timeline of the events in the case.

The story started to unfold Friday morning in Willington a quiet town just north of the University of Connecticut.

State Police responded to Mirtl Road in Willington shortly just after 9 a.m. for an assault and found two male victims.

Troopers immediately began CPR on the victims, and they were taken to local hospitals by LifeStar. One of the men later died.

Officials identified him as Theodore DeMers, 62, of Willington. State Police did not provide an update on the extent of the second victim's injuries. The second man is in stable condition as of Monday evening.

Police said they were looking for a man wearing dark clothes and a multi-colored (possibly red and white) helmet and operating a red sport-style motorcycle. They later identified the suspect as Peter Manfredonia, 23, a UConn student. 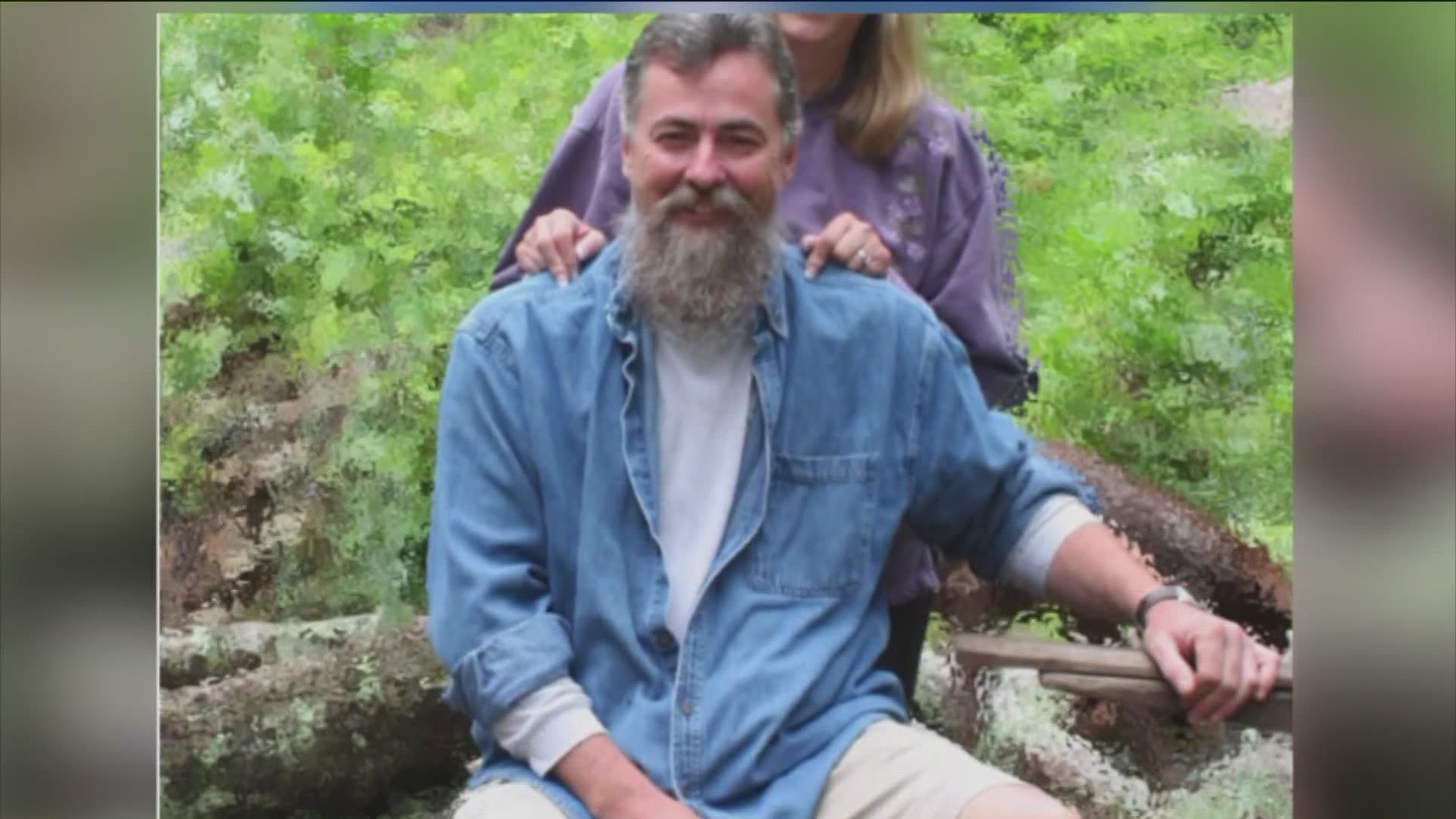 A spokesperson for the University of Connecticut confirmed to FOX61 that Manfredonia is a student in the joint School of Engineering/School of Business Management and Engineering for Management program.

According to a statement, he first enrolled at UConn in the fall of 2015 and is currently a senior.

The weapon used in the assault is believed to be an 'edged weapon,' officials said.

According to State Police, they do not believe there is a connection between the suspect and the victims.

Early Sunday, the scene shifted from the state’s quiet corner to the town of Derby, a little more than an hour away, on the banks of the Housatonic River, just northeast of Bridgeport

State Police said that on Sunday, they received a report that Manfredonia had held a victim against his will in the Turnpike Road area in Willington. Manfredonia reportedly then stole a truck, firearms, and food before leaving. Police said that the victim was not injured.

RELATED: Man who lives in home with Derby homicide victim says he heard screams and the floor shook

Police then said Manfredonia drove to Derby where police found a truck crashed and abandoned on Hawthorne Ave at Cullins Hill Rd. around 6:45 am.

Police closed nearby Osbornedale State Park for a search.

According to police, they determined that Manfredonia had an acquaintance in the area by the name of Nicholas Eisele. As police investigated, Eisele, 23, was found dead in a home on Roosevelt Avenue.

Another tenant in the home said he heard arguing around 5:30 a.m.

A friend posted Eisele's photo on her Facebook page.

By Sunday afternoon, Nick’s girlfriend was found safe and the Jetta was also discovered by police in Paterson, New Jersey, 90 minutes from Derby.

Police said the abduction victim identified Manfredonia as their captor.Their identity is not being released by police at this time.

The car believed to be driven by the Manfredonia was located about an hour away from Paterson in Knowlton Township, New Jersey near the Pennsylvania border.

Police said Manfredonia used a different form of transportation and traveled to East Stroudsburg, Pennsylvania, where he was last seen according to the FBI. Pennsylvania law enforcement agencies are actively looking for the suspect.

East Stroudsburg is just over the state line from Knowlton Township near New Jersey.

Authorities say they believe Manfredonia to be armed with a pistol as well as long guns.

On Monday, authorities continued to track down leads.

Also Monday, Pennsylvania State Police released a photo of someone they believe to be Manfredonia walking along railroad tracks in East Stroudsburg, Pennsylvania.

Back in Connecticut, more details about Manfredonia emerged. According to coaches, Manfredonia played football for Newtown High School.

An attorney representing the family of Peter Manfredonia held a brief press conference Monday at 6 p.m. outside his Dixwell Avenue office in Hamden. Attorney Michael Dolan spoke about Peter’s time at UConn and how he was working his way to a degree, also adding that Peter has struggled with mental health issues and has had the support of a therapist and his parents. The attorney concluded his message by saying:

“Peter you are loved. Your parents, your sisters, and your entire family loves you. Nobody wants any harm to come to you. It’s time to surrender. You have your parents, sisters, family's entire support. Peter from your parents – please turn yourself in.”

Tuesday, Pennsylvania State Police issued an advisory, cautioning people that Manfredonia may be trying to solicit rides throughout the area.

Pennsylvania State Police said that Manfredonia was dropped off by an Uber in front of the East Stroudsburg Walmart. There, police determined through witnesses and video evidence that Manfredonia had set off walking along the train tracks behind the store.

Police said Manfredonia was last seen still carrying a dufflebag full of items he had taken from the home invasion in Willington over the weekend.

Manfredonia is believed not to have any ties in the area and does not have a vehicle, according to police. They warn residents that Manfredonia may try to solicit a ride through ride-sharing services like Uber or Lyft, possibly through a third party. Police believe he is trying to flee the area.

Manfredonia is considered armed and dangerous, and anyone who may see him to not approach him.

The Connecticut's Chief Medical Examiner released autopsy results in the deaths of Nicholas Eisele and Theodore DeMers. Eisele suffered gunshot wounds of head, and the cause of DeMers' death was due to Sharp Force and Chop Injuries of Head with Sharp Force Injuries of Torso and Extremities.

During an afternoon press conference, Connecticut spoke directly to Manfredonia, saying "We want to hear from you. We want to resolve this in a safe way."

They laid out a timeline of the case, and warned against misinformation regarding the Manfredonia case being shared through social media.

According to troopers, the vehicle was stolen Monday around 9 p.m.

Officials say the vehicle was taken from the area where Peter Manfredonia was last seen on surveillance video. However, it has not been confirmed that he was responsible.

RELATED: Father of missing homicide suspect had been arrested on sexual assault charges in April

RELATED: 'He could hide in these woods forever' | Search for Peter Manfredonia intensifies in Pennsylvania

RELATED: Attorney for Manfredonia family: “Their hearts go out to the loved one for the people who suffered over the past several days,”