A medical investigation report says the lion was able get into the enclosure 22-year-old Alex Black was cleaning after leaving the enclosure it was supposed to be locked in. 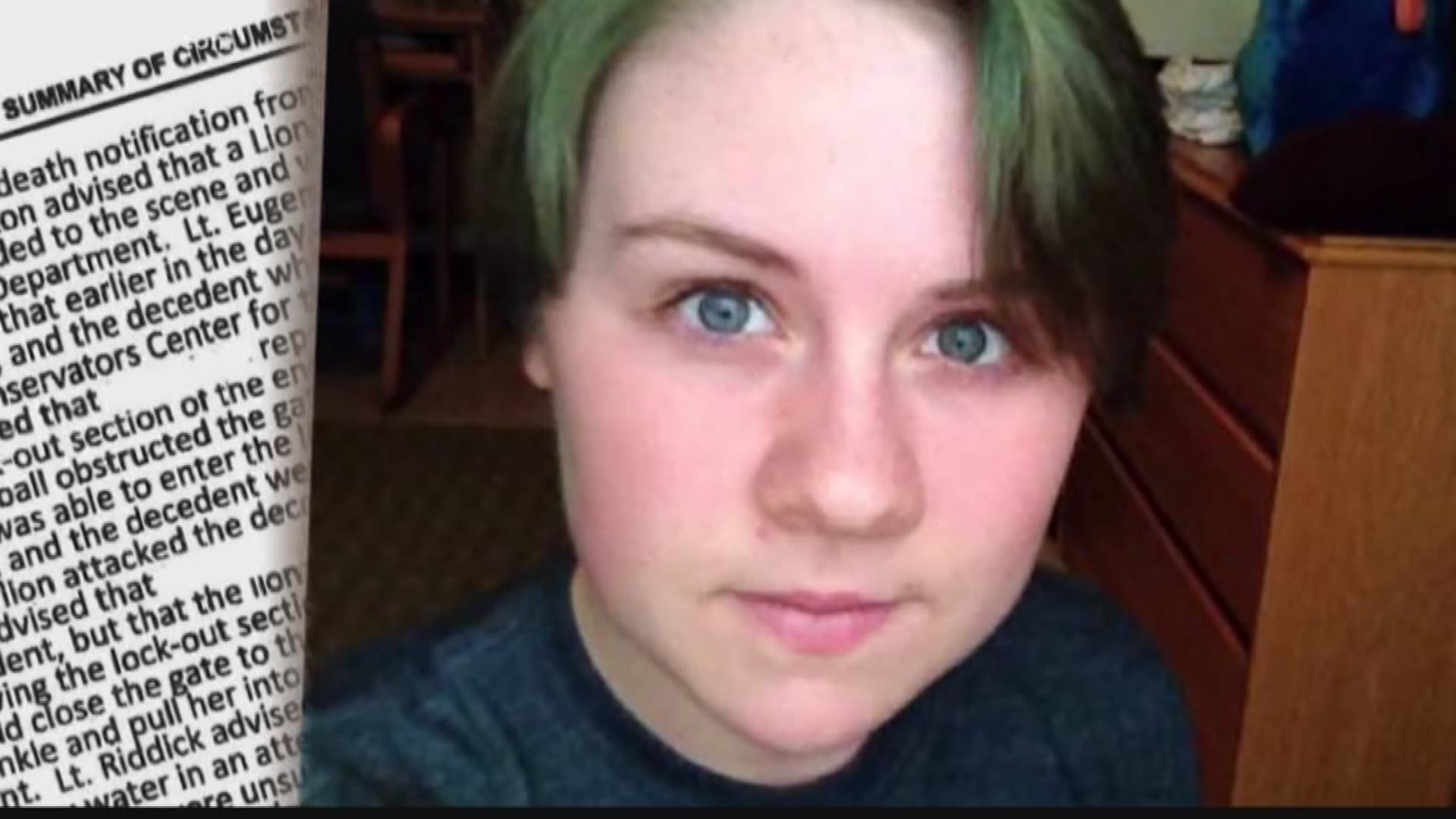 The medical investigation says the medical examiner was told the lion dragged Black around the enclosure and that the medical examiner's initial inspection showed she died from multiple lacerations and significant blood loss.  The listed cause of death is "Mauling by Animal" and the death was ruled an "Accident."

The incident happened December 30, 2018.  The medical examiner's investigation does not give a timeline of events, but does list out the "traumatic injuries."  Some of the injuries reported include a lacerated jugular vein; numerous lacerations to her shoulders, torso, abdomen and thigh that "matched claw wounds"; fractured spinal cord; deep puncture woulds to the skull "indicative of bite wounds"; and defensive wounds.

The report says Lt. Riddick advised the medical examiner it was a play ball that was blocking the gate from closing properly.

But an attorney for the Conservators Center says they don't think the ball played a factor at all.

We're told it was 28 inch enrichment ball and the attorney says the ball would have had to have been directly underneath the gate for it not to close, which is "neither accurate nor plausible." He adds, based on their own evidence, in order for the lion to get out of the enclosure, the gate was not properly closed and locked.

Since the incident the Center has reviewed their policies and retrained staff.  They found that the ones they have in place, when followed, are sufficient to keep the Center's visitors, staff, and animals safe.

The attorney for the Conservators Center sent this response to the report to WFMY News 2:

The Conservators Center has received the Report of Investigation by the North Carolina Medical Examiner. We are disappointed that the information in the “Preliminary Summary of Circumstances,” based largely on an external examination, is imprecise and has already led to inaccurate and misleading reporting. Out of respect for Alex’s family, the Center is not going to comment on all of the specifics of this tragic accident and every detail of the Medical Examiner’s “Preliminary Summary of Circumstances.” But the following clarifications are important:

First, Alex, as an intern, was not in any way responsible for this accident.

Second, all credible evidence indicates that Alex was killed almost instantly by Matthai, and the first responders on scene were conducting a recovery and not a rescue. Any interpretation of the Medical Examiner’s “Preliminary Summary of Circumstances” that suggests Alex was alive for a considerable period of time while in the enclosure with Matthai is simply false.

Third, when the Fire Department and then the Sheriff’s Department arrived on scene, the Center ceded control of the rescue efforts to those authorities. The Center complied with the request to tranquilize Matthai in order to attempt to recover Alex’s body. The Center believed that his euthanization likely would be necessary for testing required by the State. Unfortunately, Matthai was overstimulated after having been moved by the use of water from the fire hoses and this rendered the tranquilizer ineffective. Law enforcement then fired eight shots to kill him.

Finally, in the wake of this tragedy, the Center has methodically reviewed its safety policies and procedures and has re-trained its staff. The Center is confident that those existing policies and procedures, when followed, are sufficient to keep the Center’s visitors, staff, and animals safe. The report that the gate to the enclosure from which Matthai escaped was obstructed from closing by a 28 inch enrichment ball is neither accurate nor plausible.

Alex’s family has made clear to the Center that they want to work with the Center to ensure Alex’s legacy in the zoological world, which she loved. To that end, the Conservators Center will continue to work tirelessly to develop industry best practices, advancing safety precautions internally and with other zoological parks, and will continue its mission to introduce visitors and future animal husbandry professionals to rare, threatened, and endangered species.

Out of respect for the family and because there is still an ongoing investigation the Center will not comment further on the Report or the accident at this time.

According to our past reports, a staff member called 911 after the attack started and emergency personnel and Caswell County deputies were dispatched to the scene.

In a Caswell County Sheriff's Office investigation report, several staff members were trying to separate the lion from Black's body in the enclosure when they arrived. A Conservators Center staff member hit the lion with three tranquilizer darts, but the lion did not go to sleep.  Deputies had to shoot the lion 8 times, ultimately killing it, in order to "neutralize the situation."  That lion was identified as Matthai.

The Sheriff's Office and County Animal Control have completed their investigations into the matter.

A USDA inspection report completed on January 31st says there were "no non-compliant issues" found during the inspection after the attack.  The USDA regulates the facility.

There is also a North Carolina Department of Labor OSH investigation because it was a workplace fatality.  That investigation is ongoing.