Beau Bentley almost didn't become "Lucky For Life". He had the winning ticket in his hand, ready to throw away. 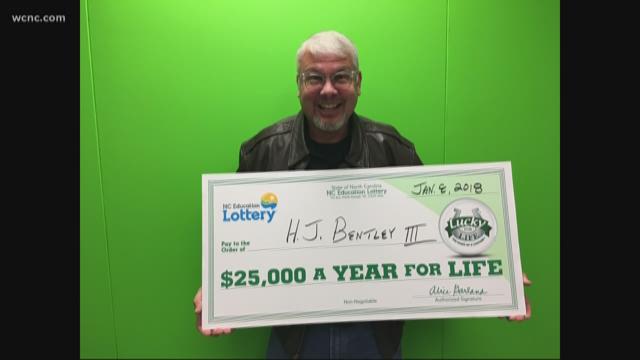 CHARLOTTE, N.C. -- Beau Bentley almost didn't become "Lucky For Life". He had the winning ticket in his hand, ready to throw away.

"So it was one of those days, hectic Monday after picking up the kids from school, and I had a hand full of older tickets, because when I put the sun visor down, they all fell down, so I might as well get these checked. Scanned the first one, nothing. Scanned the second one, nothing. Scanned the third one, it said 'error.' I scanned the next one and it won $8.00 and said I need to throw these away, and a little voice said, 'let the guy check it,'" said Bentley said.

So the 53-year-old walked up to the Harris Teeter worker to find out.

"I think there's a problem, and he goes, 'well, we'll check it' and he goes, 'Dude! You've got to go to Raleigh!' And all of a sudden, the music started playing, and I said, 'what are you talking about?' He goes, 'That's a jackpot winner!'"

“I was stunned, and in disbelief,” said Bentley, who stays at home to care for his special needs daughter.

After federal and state tax withholdings, Bentley took home $271,053. He hopes to use the money to educate his children.

"We have a special needs daughter. She's on the autism spectrum, and insurance doesn't really help with much. This is going to go a long way in helping her get the help she needs to be a productive member of society. Out of pocket last year was over $70,000," said Bentley.

So far, two North Carolinians have won the top prize: $1,000 a Day For Life. 13 have won second prize. In all, there are 10 ways to win a prize playing Lucky For Life.

The North Carolina Education Lottery said ticket sales from games like Lucky For Life make it possible for the lottery to raise more than $600 million a year for education. For details on how lottery funds have made a difference in all of 100 counties, search for the “Impact” section of the lottery’s website.