Robert Geyer recalls a moment nearly two decades ago, that sent him on a journey to build something -- that today -- is helping save lives. 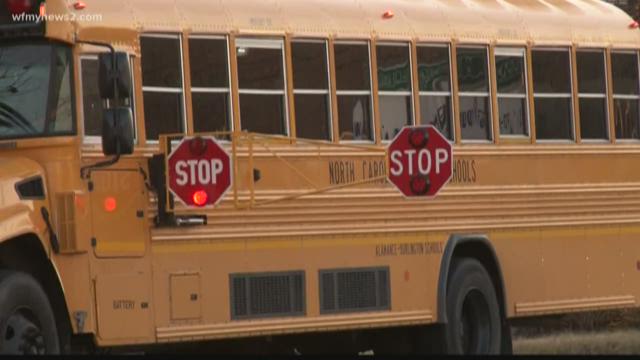 (ALAMANCE COUNTY) -- Mom and dad, you always want to keep your kids safe. When you send them to school, you expect them to come home the same way they left - without a scratch.

But when some kids get off the bus, some drivers still skirt around the stop arm.

Alamance Burlington Schools says its a problem - so it installed 25 extended stop arms.

"A friend of mine's kid was killed in '99, and it really struck home and bothered me, and like many other people I said somebody should do something about that. My wife put her hand on my shoulder and said you're somebody, do something," said Robert Geyer, the President of Bus Safety Solutions.

Robert Geyer recalls a moment nearly two decades ago, that sent him on a journey to build something -- that today -- is helping save lives.

Geyer's invention, a longer stop sign arm, which schools hope will stop drivers from passing buses when kids are getting off them.

"We're talking about the lives of kids every day. If on any given day 3100 school buses are passed by the motoring public, then we are risking the lives of at least 3100 kids every day," said Al Smith, the Alamance-Burlington School System Transportation Director.

The Alamance-Burlington School System installed the arms on 25 buses, and if it can get just one more person to stop, the district calls it a win.

"I don't think you can put a price on the life of a child, so if we can change anybody's behavior I think obviously it is a successful operation," said Smith.

The arm is long enough that cars in the next lane can't pass, and Geyer says this is a great incentive for people to stop.

"If a car tries to go by it, of course they mess up their car and that seems to be a great deterrent, because although they wouldn't mind hitting a child, for some reason or another they do object to messing up their car," said Geyer.

Although geyer stepped up and is making something happen, he says when parents are in a situation where they lose their child, it is much easier said than done.

"A lot of the parents, you know you would think they would want to respond and do something, but it is very hard burying your child," said Geyer.

When we asked Geyer if these arms are effective, he pointed out Transylvania County, where all 35 of their buses have the arms.

On the day passed buses are counted, the number of drivers who went around stopped buses went from 16 down to two, in just two years.