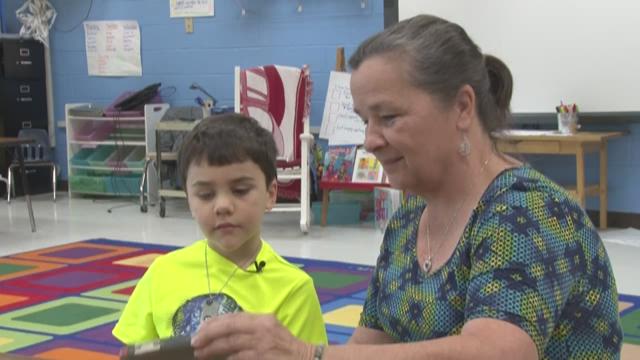 KERNERSVILLE, NC -- A teacher in Kernersville is daring to be different for a good cause!

Right now, he’s getting a lot of double takes because his hair is hot pink.

“When I walk down the halls, there's always comments going on,” said Sigmon.

He's trying to raise money to buy a service dog for a 6-year-old kid who suffers from epilepsy.

He was diagnosed with epilepsy when he was 15 months old.

In his short life, Warren has already suffered through 85 seizures.

His grandmother, Susie Hook, says she worries about Warren all the time.

“There's not really a whole lot you can do except for just protect him and hope that he comes out of it quickly,” said Hook.

Because of his condition, Warren needs a service dog to keep him calm during his seizures.

So Sigmon is calling on his students to help out!

Each week, the student who raises the most money for Warren gets to choose a new hair color for Sigmon.

So far, the students have already raised more than $500!

1 / 22
John Sigmon, a social studies teacher at Southeast Middle School is dying his hair to raise money for a kid who needs a service dog!

“Anytime we can be a positive influence, not just on somebody in need, but also get other people involved, that's what we're here for,” said Sigmon.

“He's my world,” said Hook. “For anyone that helps me out making his life easier and better, it's just unbelievable.”

This isn't the first time Sigmon has changed his look to help a student.

Three years ago, he shaved his head after his students raised $2,500 to help a classmate fighting leukemia.

Warren's family doesn't know if his condition is curable or not.

They're meeting with doctors at Duke Hospital in June for testing.

They hope to get the new service dog later this year.