The wife of a man seriously wounded and left paralyzed during the military's search for Sgt. Bowe Bergdahl in 2009, testified on Monday during Bergdahl's sentencing hearing. 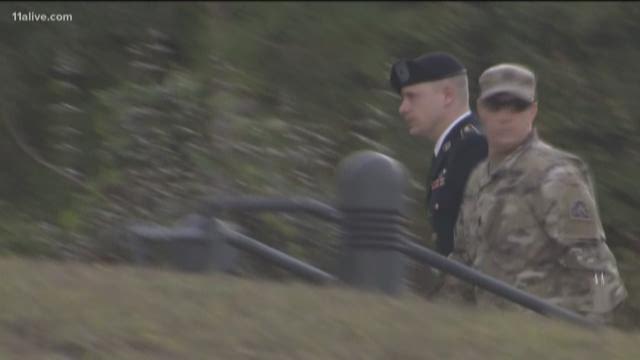 In tears, Shannon Allen described how her husband was grievously wounded while was searching for Bergdahl, after Bergdahl walked off of his post eight years ago.

There has been no decision in the case yet. The military judge may announce Bergdahl's sentence as soon as later this week. He may face up to life in prison for desertion and for endangering the lives of the service members who searched for him -- including Master Sergeant Mark Allen of Loganville, serving with the Georgia National Guard's 48th Brigade.

Allen's wife, Shannon Allen took the stand, and fighting back tears, she described life after an enemy sniper's bullet pierced the helmet of Master Sergeant Allen while he took part in a search mission for Bergdahl in July 2009.

She spoke of how they were married in 2006, and she showed photographs of him. She said he had been an outgoing, happy, vibrant man, and active in their children's lives.

But after he had been shot in the head during the search for Bergdahl, he has had more than a dozen surgeries. Doctors have had to remove part of his brain. He remains paralyzed and cannot speak.

"We can't even hold hands anymore unless I pry open his hand and place mine in there," Sharon Allen said. "He's lost me as a wife. Essentially, instead of being his wife, I'm his caregiver."

She spoke for about 30 minutes. And as she left the courtroom, she walked past Bergdahl, looking straight ahead, not at him.

Bergdahl's attorneys had tried to exclude Shannon Allen's testimony as being prejudical -- but the judge allowed and will take what she said into account when he decides Bergdahl's sentence.

Bergdahl himself, testifying Monday afternoon, apologized, saying, "My words can't take away what the people have been through."