"Based on the intelligence that we have, the department has taken immediate steps to enhance our security posture and staffing for a number of days." 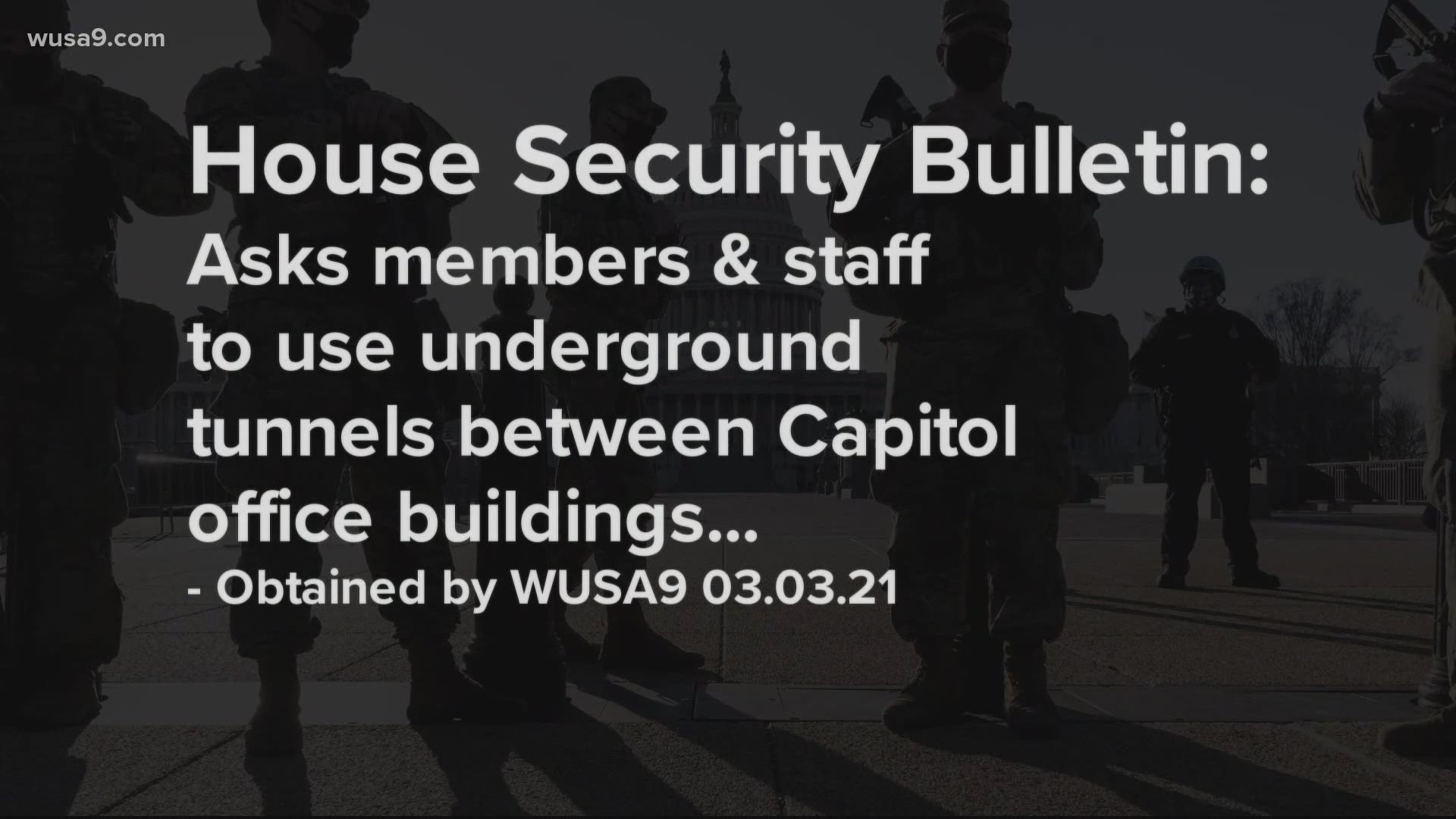 WASHINGTON — In an email sent to all members of Congress, acting House Sergeant at Arms Timothy P. Blodgett warned of “new and concerning information and intelligence indicating additional interest in the Capitol for the dates of March 4 – 6 by a militia group."

The alert obtained Wednesday marks the first notification of a multi-day security threat against Congress, based on intelligence reviewed by the U.S. Capitol Police.

“We do have some concerning intelligence,” acting U.S. Capitol Police Chief Yogananda D. Pittman told House members in a hearing Wednesday. “We have enhanced our security posture, and we’ve let the National Guard and our partners know what to expect tomorrow.”

Online chatter from QAnon supports the false notion that former President Donald Trump could still be inaugurated on March 4. The date represents a historic marker when U.S. presidents formerly took the oath of office, until Franklin Delano Roosevelt’s second term in January 1937.

Pittman declined to further describe the intelligence received in the public hearing. She testified earlier in the morning that within the first two months of 2021, USCP reported a 93.54% increase in threats to members of Congress compared to the same period in 2020

Capitol Police had released a statement Tuesday, saying that it was aware of "intelligence pertaining to March 4 and continues to work with all of our law enforcement partners," according to a USCP tweet.

"Based on the intelligence that we have, the department has taken immediate steps to enhance our security posture and staffing for a number of days, to include, March 4," USCP said in its statement. "The Department has communicated our enhanced posture as well as the available intelligence for the entire workforce."

According to WUSA9's Jordan Fischer, who has been covering Congressional hearings related to the Capitol riots, there is a belief by some in the QAnon community that March 4 signals the return of former-President Donald Trump.

March 4 is the day some #QAnon adherents believe Donald Trump will make his victorious return to D.C., be sworn back in as president and begin the long-awaited executions of the Satanic child sex cabal they think runs the government. https://t.co/zLKO7ovNol

On Tuesday, FBI Chris Wray answered questions from lawmakers on Capitol Hill about domestic terrorism following the Jan. 6 Insurrection. Wray condemned the January U.S. Capitol riot while making it a point to say his agency is looking at the potential for extremism regardless of where it originates politically.

Wray said the FBI currently has 2,000 active investigations into domestic terrorism. He said that is twice the number it had in 2017.

“It is clear that a large and growing number of the people we have arrested so far in connection with the 6th (Jan. 6 Capitol riot) are what we would call militia violent extremism,” he said.

RELATED: Capitol rioters express regret for participating in unrest after not getting a pardon from former President Trump