Representative Ted Budd is running for re-election in North Carolina's 13th District in the US House of Representatives. 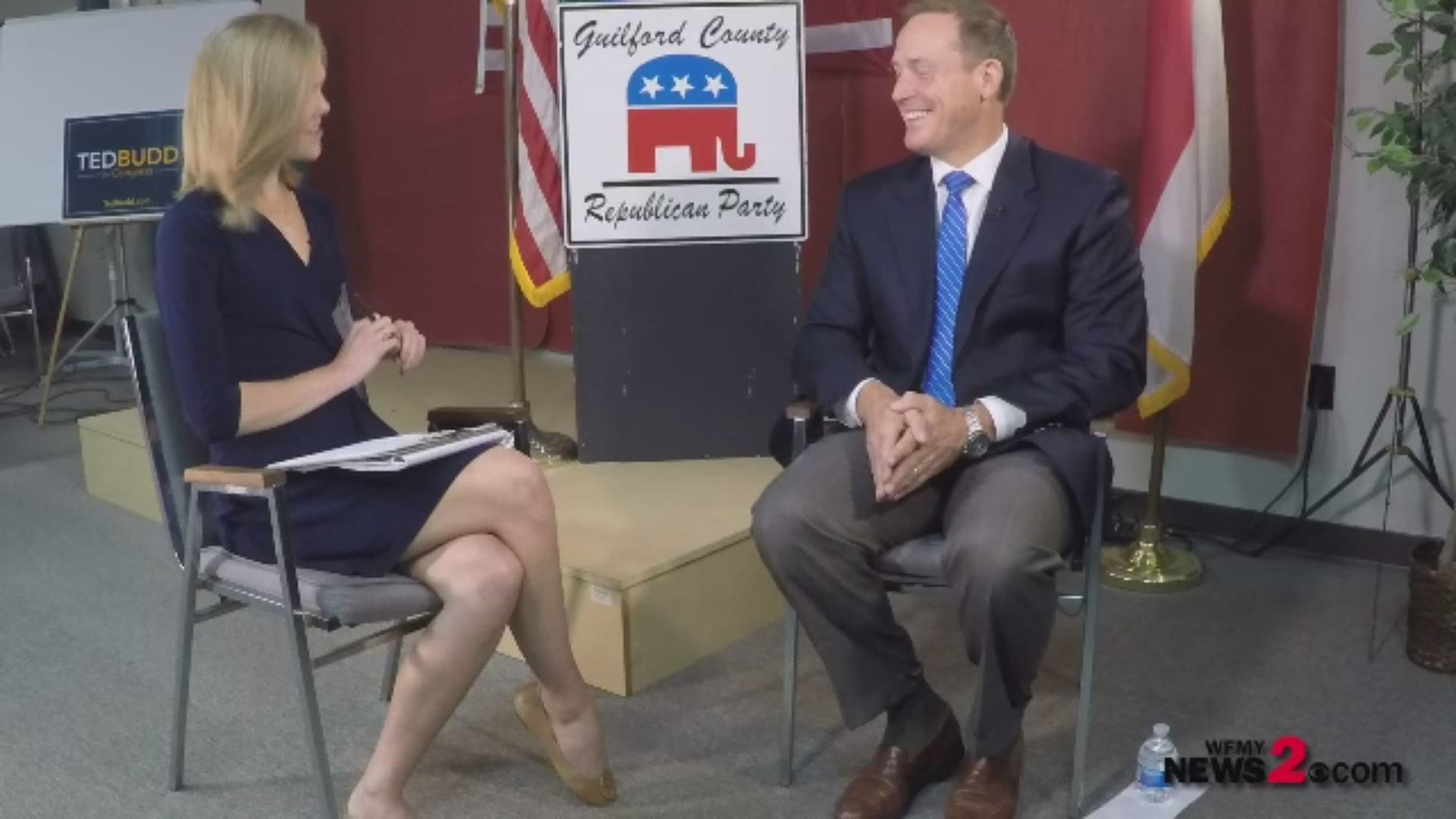 GREENSBORO, NC -- Representative Ted Budd is running for re-election in North Carolina's 13th District in the US House of Representatives. Budd first took the seat in 2016. He owns a gun shop in Forsyth County and lives on a farm in Davie County. WFMY News 2's Maddie Gardner sat down with Representative Budd to talk about his work in congress and the campaign.

Let's begin with the past two years of your life, representing District 13 in the House. What stands out to you?

TB: The accomplishments that we’ve been able to do in Washington. You look at the opioid issue that we’ve been able to address. Unemployment is at an all-time low, well a 50 year low, since 1969 it’s not been 3.7%. We added 134,000 jobs last month across the country. 201,000 jobs before that. Our growth rate two years ago was stuck at 1.9%, not even keeping up with inflation, now it’s at 4.2%, the Fed revised it from 4.1 to 4.2. We think that’s sustainable and it’s creating a lot of jobs as we’re seeing in those numbers. Then you look at the people I’ve been able to interact with. That’s just been phenomenal. People of all walks of life. From urban to rural, all across the district and the fivecounties that I get to represent. That’s probably been the most amazing part.

Why are you seeking re-election?

TB: We’ve been able to accomplish so much and we know there is an infinite amount of things to do. We have to continue on the tax reform path, the deregulation path, make things good for middle class. We put $1,600 in their pockets per year on average and we have to continue that. Our country is better but there’s still a lot of work left to do and I’m going to work a little while longer at doing this.

Is there one specific issue that is most important to you or what you’ll address first if re-elected?

TB: One of the things we do is try to put a choke hold on terrorism around the world and end terrorist activities. We’ve been pretty successful at that but there’s a lot that’s more broad on the financial services committee. The Encouraging Public Offerings Act – I mean you look at the number of offerings that are out there for people to choose from as they seek to invest their 401K and their retirement funds. There are less options now than there were 10 years ago and that’s because of the intense regulation that companies have had to go through if they wanted to list, take a company like Snapchat for instance, very, very complex. Or it could be a local trucking company that wanted to offer itself publicly. We want to reduce those regulations to make it easier on them to give people who want to retire or invest their money, give them more options. And so by deregulating some of the financial markets we give people more choice back home and ultimately that helps all of our prosperity.

You look at the opioid crisis – in this very room, two years ago this month, a young man that still works me said, ‘I just lost my brother,’ so this is very personal and it really hit home at that moment two years ago how devastating of a problem this was. And I’ve talked to family after family after family who are personally impacted by this. And the things we can do like the THRIVE act that provides housing for people that are coming out of addiction counseling that helps them get back on their feet. I look at the COACH act that helps write regulation and allow best practices so there’s not overprescribing. There’s about 50 to 60 bills that we’ve passed this past Fall that deal with the opioid crisis. They’re not all bad in some cases but there’s so much abuse and we have to get a hold on this.

How do you focus so heavily on more than one issue?

TB: You run as fast and hard as you can to do as much for as many people as you can. So while I’m in committee it’s things like encouraging public offerings, like deregulation, it’s things like rolling back Dodd-Frank legislation and we’ve been very successful at that. We’ve introduced HR10 which became known as Senate Bill 2155 – that is allowed, we had no new banks in our country essentially in ten years. In the last 18 months we’ve had five new banks just here in North Carolina alone. And North Carolina leads the nation in these smaller community banks that show up to serve people locally. So again we’re very proud in what we’ve done on the financial services committee. But we’ve also done things with defense – help rebuild our military with over $700 billion dollars – very expensive because we have a lot of catch up work to do from neglecting our military in the past. So that’s something I do outside of committee. Opioids is something I do outside of committee. So we run dual tracks – we work on those financial things and we work for the broader good of everybody.

You talk about being a political outsider, what does that mean to you?

TB: Not being part of the Swamp – I mean that’s part of the language we’ve developed over the last two years – but I’m as comfortable here at home, I’m actually more comfortable here at home, in Greensboro, in Morrisville, on the farm, I’m still the same guy I was – I’ve learned a lot in two years but I’m essentially the same guy. I understand how Washington works, I want to be very effective, but I don’t want that to be the sustenance of who I am.

Do you think you’ve upheld the promise to voters to be a political outsider?

The top donor [to your campaign] right now are Leadership PACs – do you think that contradicts your position as an outsider?

TB: Absolutely not because if you look at – all PACs are going to get their money from individuals at some point and so you look at who it helps, it helps those of us who are back home. When you have five new community banks to date – those are people who say ‘we are serving those who are local and we thank you for helping us and we want to continue the good momentum for our industry. These are things that ultimately help the middle class and helps everyday working Americans. Absolutely, I’m very supportive and I would encourage people to look at the people who are supporting me and I think that represents our values here in the 13th district of North Carolina.

Do you pay attention to the polls?

TB: Polls come and go and they go up and down and it all depends on how you build the statistical figures behind them. But we are out knocking on doors, we are making phone calls, me personally almost everyday of the week. I’m out knocking doors in the five counties we represent. I’m doing good work for colleges, Bennett College here in town, we are serving those in this district. We hope people will recognize the work I’ve done for them and we hope they will send me back at the same time it’s just about being out there and serving the people in our district.

Last campaign season you said you were going to turn DC inside out and then come back home as soon as possible – do you have a time frame in mind?

TB: We don’t want to unilaterally disarm but you just want to make sure you’re valuable to the people back home. Don’t have a timeline but want to run through the tape on this election, win this one and then re… we always re-evaluate with family every year and say, ‘is my family behind me?’ so they’ve given me the green light because they’re the first priority, want to make sure you’re not resentment at home and so far they’re still behind me.

Your campaign just released it’s first attack ad on Ms. Manning – why was this decision made?

TB: We have to get the truth out. We have to realize that as soon as Nancy Pelosi said, ‘say whatever you have to say to win,’ my opponent started lying about pre-existing conditions and started lying about other things on the campaign. So we just have to get the truth out. I’m a positive person so I like to stay on that track but when people start lying about me, and this is somebody who’s given nearly $1 million dollars to Nancy Pelosi and her allies, and they say the wrong things, they lie about pre-existing conditions, they lie about everything else – not everything else – but many things, so we have to lay the truth out for people to decide.

I assume you've seen Ms. Manning's ads against you, do you want to respond to any of those claims?

TB: I mean we’ll do that on the air with our ads but this is not, for those who are in Greensboro, the eastern part of the district, this is not about being, who’s their next door neighbor, this is about who gave nearly $1 million to Nancy Pelosi and who’s willing to say anything to win. As soon as Nancy Pelosi said that, that’s when my opponent started lying and I think it’s very unfortunate that she’s taken that path.

But she says in her ads that she’ll vote against Pelosi.

TB: Again, that was 48 hours after Pelosi said, ‘say anything to win,’ she lied about voting for Speaker Pelosi and she’s trying to hide the fact that she’s given her $1 million and she’s lying about pre-existing conditions.

Is it true that you sleep on a fold-out bed in your congressional office and shower at the gym? Why?

TB: It keeps me focused on home and not getting too comfortable in Washington.