A man trapped by high tide while hiking at Hug Point, south of Cannon Beach, is home safe thanks to a U.S. Coast Guard helicopter crew. 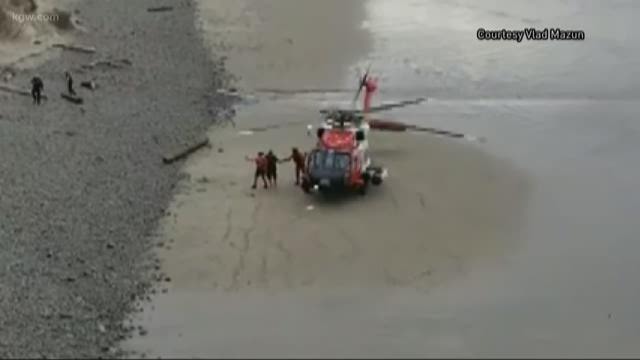 CANNON BEACH, Ore. -- A man trapped by high tide while hiking at Hug Point, south of Cannon Beach, is home safe thanks to a U.S. Coast Guard helicopter crew.

“The high tide was in and he was about thigh-high in the water,” said Petty Officer 1st Class Levi Read with the Coast Guard. The man called 911 around 11:50 a.m. on Sunday after getting stuck.

A Cannon Beach Fire and Rescue spokesman said the man, who was not identified, had hiked to the beach but was unable to hike out for unknown reasons.

“He has very little water and very little phone battery life left,” said a 911 dispatcher to crews on a recorded dispatch call.

A Coast Guard aircrew, which was training on an MH-60 Jayhawk helicopter nearby, was rerouted to rescue the man. Video from the Coast Guard captured the rescue.

After being hoisted up from the beach, the hiker was then dropped off at a neighboring beach and was met by Cannon Beach EMS crews, a moment filmed by a witness.

A spokesman said the man appeared to be fine and was not transported to a hospital.

“Cannon Beach, Hug Point, is a well-known problem area for getting caught in high tides,” said Read, who noted that there are multiple rescues in the area each year.

Although the area’s tide pools are an appealing tourist draw, the beaches can be dangerous when the tide comes in, Read said.

“The Coast Guard reminds all residents and visitors to the Pacific Northwest Coast to always be aware of when the tide is expected to change. Knowing this information is the best way to stay out of trouble,” wrote the Coast Guard in a statement about the incident.