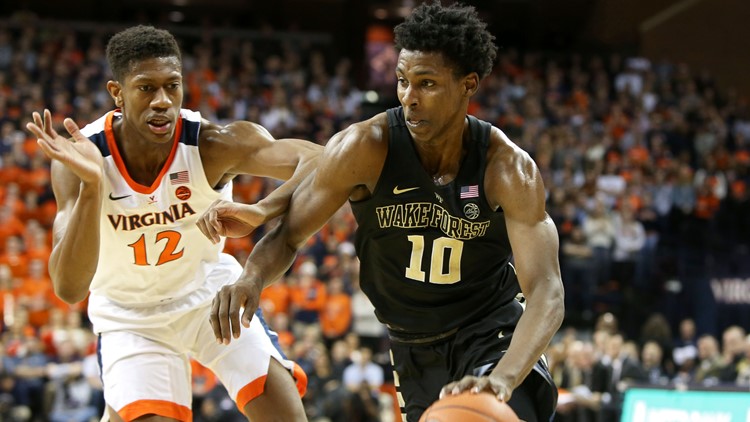 Photo by: Getty Images
CHARLOTTESVILLE, VA - JANUARY 22: Jaylen Hoard #10 of the Wake Forest Demon Deacons drives past De'Andre Hunter #12 of the Virginia Cavaliers in the first half during a game at John Paul Jones Arena on January 22, 2019 in Charlottesville, Virginia. (Photo by Ryan M. Kelly/Getty Images)

"We are very proud of Jaylen for signing a two-way contract with the Trailblazers," head coach Danny Manning said. "We know he will be a valuable asset to the team. He put in a considerable amount of work to reach this point in his career and we look forward to watching him develop at the next level."

Hoard ranked second on the team in scoring at 13.1 points per game and led the team in rebounding at 7.6 per game last season. His seven double-doubles were fifth-most by a freshman in Wake Forest history, eclipsed only by Tim Duncan (13), Al-Farouq Aminu (10), Rodney Rogers (8) and James Johnson (8), all eventual first-round NBA selections. He joined Dickie Hemric as the only Demon Deacon to have a pair of 20-point/15-rebound games as a freshman.