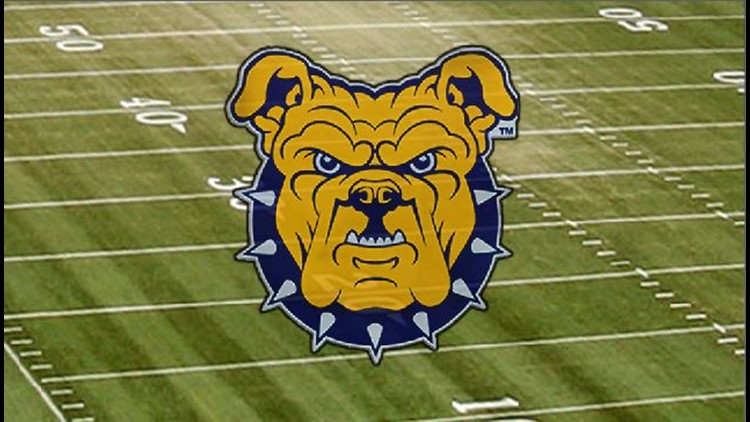 Tarik Cohen ran for 144 yards on 36 carries and NC A&T scored twice on defense to beat Delaware State 33-20 on Saturday.

CHARLESTON, S.C. – There is truly a tradition of greatness at the running back position at a university when 299 yards rushing is the third-best single-game performance in the football program’s history.

Junior running back Jah-Maine Martin added to the lore that is Running Back U., at N.C. A&T by rushing for 299 yards and two touchdowns to lead the Aggies to a come-from-behind 27-21 win over Charleston Southern Saturday night at Buccaneer Field.

Martin’s two touchdowns went for 84 and 76 yards respectively. His 84-yard run is the fifth-best in school history tied with Tarik Cohen (2016) and Michael Basnight (1996).

“Our running backs coach (Shawn Gibbs) always tells us that running backs have to be the spark plugs of the offense,” said Martin. “I put that in my head and said, ‘Hey it’s time to go for it.’”

Martin’s spectacular night and the Aggies comeback overshadowed another great mark in school history. Senior wide receiver Elijah Bell became the Aggies all-time leading receiver in yards breaking a record Herbert Harbison had for more than three decades. Bell broke the record on a 42-yard reception from graduate quarterback Kylil Carter with 9:23 remaining in the game.

Bell leads all Aggies with 2,347 career receiving yards. Harbison finished his career with 2,301. Bell is 11 receptions shy of becoming the school’s all-time leader.

All of those above accomplishments were irrelevant in the first half as the Aggies (2-1) were just trying to figure out a way to slow down the Buccaneers offense. The Bucs (0-3) jumped out to a 14-0 lead over the No. 17/15 N.C. A&T Aggies over the first 18 minutes of the game.

Junior placekicker Noel Ruiz kept the Aggies steady. Ruiz’s ability to put points on the board when the Aggies offense started moving the ball midway through the second quarter was key in tampering some of CSU’s energy.

Ruiz hit field goals from 31 and 43 yards in the first half to give the Aggies something positive as they went into halftime trailing 14-6 thanks to a first quarter where they outgained the Aggies 111-42.

“There start was so huge,” said N.C. A&T coach Sam Washington. “We started so flat, it terrified us. We felt like when we got a chance to go into the locker room, we get would get things back on track. We thought we were going to be fine and we were.”

N.C. A&T started by making some personnel changes. Chris Moseley started at cornerback to open the second half and senior safety Jalon Bethea saw a lot more action. The Aggies also rolled Carter out of the pocket more giving him a chance to complete some passes on the run.

“The main adjustment we made was putting people out there who wanted to be out there,” said Washington who saw his defense hold the Bucs to 101 yards of offense in the second half. “We didn’t change what we were doing, we just changed who we were doing it with.”

Despite the changes, a fumble by Martin on the Aggies opening possession of the second half looked to be costly. The Bucs took over at the Aggies 41-yard line and moved the ball to the Aggies 12 before senior rover Antoine Wilder came up with an interception in the end zone to end CSU’s hopes of taking a two-touchdown lead.

Martin redeemed himself when he started his heroics to open the fourth quarter with his 84-yard run off tackle to cut the Bucs lead to 14-12. Bell scored on a two-point conversion to tie the game at 14. On CSU’s next possession, Moseley intercepted CSU quarterback Jack Chambers. The pick put the Aggies in position for another Ruiz field goal that he was successful on from 46 yards out to give the Aggies their first lead of the game at 17-14.

N.C. A&T scored on their third straight possession when Ruiz was successful on a 27-yard field goal set up by Bell’s 42-yard reception as the Aggies went ahead by six. But it was the incredible 76-yard run by Martin that put the Bucs away.

Martin busted through a huge hole on the right side of the line and began to sprint down the field. As he encountered CSU defenders, he cut back, spun and stiffed armed his way until he crossed the goal line. His jaw-dropping run gave the Aggies a 27-14 lead with 5:27 to play.

“I saw the end zone, and I wanted to get in it,” Martin said about his fantastic touchdown run.

With the help from some pass interference calls, the Bucs were able to score again on a Kameron Brown touchdown with 3:29 to play. But on the Aggies next drive, Martin had runs of 13 and 33 to give the Aggies the first downs they needed to melt the clock.

Martin and the Aggies will have a bye week before facing their first Mid-Eastern Athletic Conference (MEAC) opponent in Delaware State on Sept. 26 at BB&T Stadium. The game will be televised live on ESPNU with a 7:30 p.m., start.