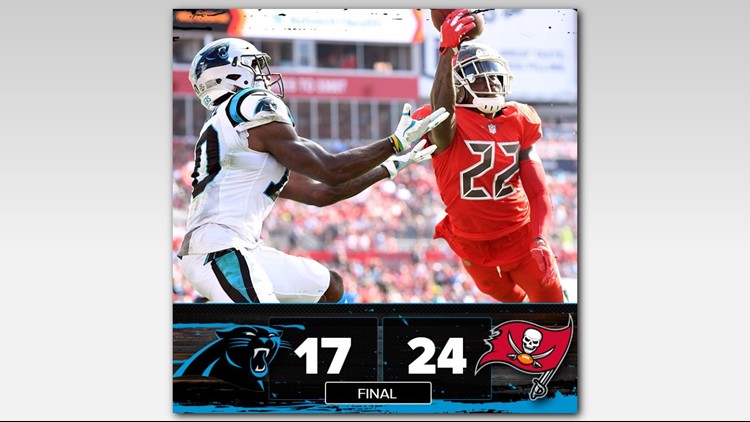 Tampa faces 3rd & 7 and gets a short gain. The Panthers get a stop and will get one more chance to tie it. They'll get the ball at the 26 with just over a minute to play.

Jason Pierre-Paul exploded off the line and sacked Cam on 3rd & 5.

Winston can't complete a 3rd & long and the Panthers get it back again with 4:07 left.

Bucs get their fourth interception of the day. Newton forced it over the middle and it looked like it was a hurried throw.

Samuel comes up big again for a 10-yard reception.

On 3rd & 6, Newton finds Samuel for a huge play near midfield. Samuel got open on the other side of the field. On the next play, Newton nearly throws his fourth interception.

Panthers get a big stop and force Tampa to punt with 8:55 left.

Newton throws his third interception of the day to kill the drive. Looked like pressure was coming around the edge and impacted the throw.

Carolina stops Tampa on third & long. Mike Evans is called for offensive pass interference. Bradberry was there with great coverage. Panthers get the ball down 7 with 12:24 remaining.

A hold wipes out a big play for Tampa. Luke Kuechly caused the hold.

Winston scrambles for a first down. He's showing off his sneaky good run skills today.

Newton finds Funchess for a touchdown! That's his first catch of the day. Carolina cuts the deficit to 24-17. Newton was 6 of 7 passing on that drive, more like the Cam we saw the first half of the season.

McCaffrey again saving the Panthers with big plays. That time he gets a big run on a toss. Rookie DJ Moore gets the first down on a swing pass. First and goal for Carolina.

Newton finds McCaffrey for the first down on third & 7.

Panthers look to be mired in their slide. A special teams miscue puts them at their own 8 yard-line.

Another pass interference on the Panthers puts the ball at the 1. That's a 52-yard gain for the Bucs and they score on Barber's touchdown run one play later. It's 24-10.

On 3rd and 11, Winston finds Godwin again for a first down. Godwin turned around Donte Jackson on an out route to get open.

Panthers flagged for pass interference to give Tampa a first down.

On 3rd and 17, Bucs get pressure on Newton and force an incompletion. Gano's field goal attempt is good. It's 17-10.

Panthers have the ball in the red zone. Cam is sacked for the third time. He finds Curtis Samuel at the Tampa 9. On 3rd down, Newton finds Funchess for a touchdown, but it's coming back after a holding penalty. Chris Clark is the offending player.

Cam is 6 of 10 passing with two interceptions. Needless to say, he's not following up with his comment earlier this week about playing the best football of his career. Tampa has 10 points off the interceptions, and thus a 10-point lead entering halftime.

Eric Reid nearly got another huge interception. Bucs face 3rd & 11 after a penalty.

Tampa receiver Mike Evans gets the Bucs to the red zone on a slant against James Bradberry. That's Evans' first catch of the day.

Newton throws an interception as the Bucs stepped in front of a slant. They'll get it at the Carolina 32 with 1:05 left.

McCaffrey is the offense so far with 105 yards of offense so far. A great defensive play by Tampa saves a touchdown on the next play.

Panthers have run just 15 plays to Tampa's 29 so far. Panthers have the ball at the Tampa 25. Cam escapes trouble and runs out of bounds after a 15-yard scramble.

Carolina can't overcome the penalities and have to punt after 3rd & 13.

The ruling on the field's confirmed. A huge break for the Panthers. They'll take over at the 20.

Barber extends the ball at the goal line and it's ruled a fumble with the Panthers recovering! They'll look at it on the review. For now, it's a huge turnover forced by Carolina.

A 48-yard pass play gets the Bucs to the Panthers side of the field. Humphries with another big catch. He evaded the linebacker in coverage and gets Tampa down to the Carolina 6.

Tight end Greg Olsen limps off the field after third & 7. Panthers punt on 4th down.

Tampa gets its second sack of the game to end the first quarter.

Winston is sacked on third down! Mario Addison and Kyle Love were in on the sack. Bucs will punt.

McCaffrey gets the touchdown one play later on a dump off pass. That's his 11th touchdown this season. 10-7.

Christian McCaffrey gets the big play! Panthers with first & goal!

Cam gets sacked to force third & long on the Panthers' first drive. He's picked off on the next play. Tampa gets the ball on a short field.

Tampa running back Peyton Barber with a big run gets the Bucs to the Panthers 23.

The Panthers start the game on defense. Tampa gets past midfield on third down. Jameis Winston completes his first three passes.

Share your photos and thoughts on the game using #PanthersOn2 with us @WFMY on Twitter. Join the conversation!

The starting lineups for both teams:

Inactive update: Panthers defensive tackle Vernon Butler is a healthy scratch. Defensive end Efe Obada is back up and defensive end Marquis Haynes is down.

The Panthers have lost three in a row after looking like playoff hopefuls at 6-2. To get off the snide, they've got to overcome their woes on the road, where they're 1-5 this season. Sunday's game is a must win. New Orleans' loss on Thursday gives the Panthers a sliver of hope for the division, but Carolina has a better chance right now to grab a wild-card playoff spot. There are still two games left against the Saints, who beat Carolina three times last season.

Be sure to watch Sports Reporter Luke Lyddon and Digital Producer Brian Bennett at halftime on the WFMY News 2 Facebook page for first-half analysis.