Local artist Leo Rucker painted the mural which depicts more than 2 dozen people who’ve played a role in the community. 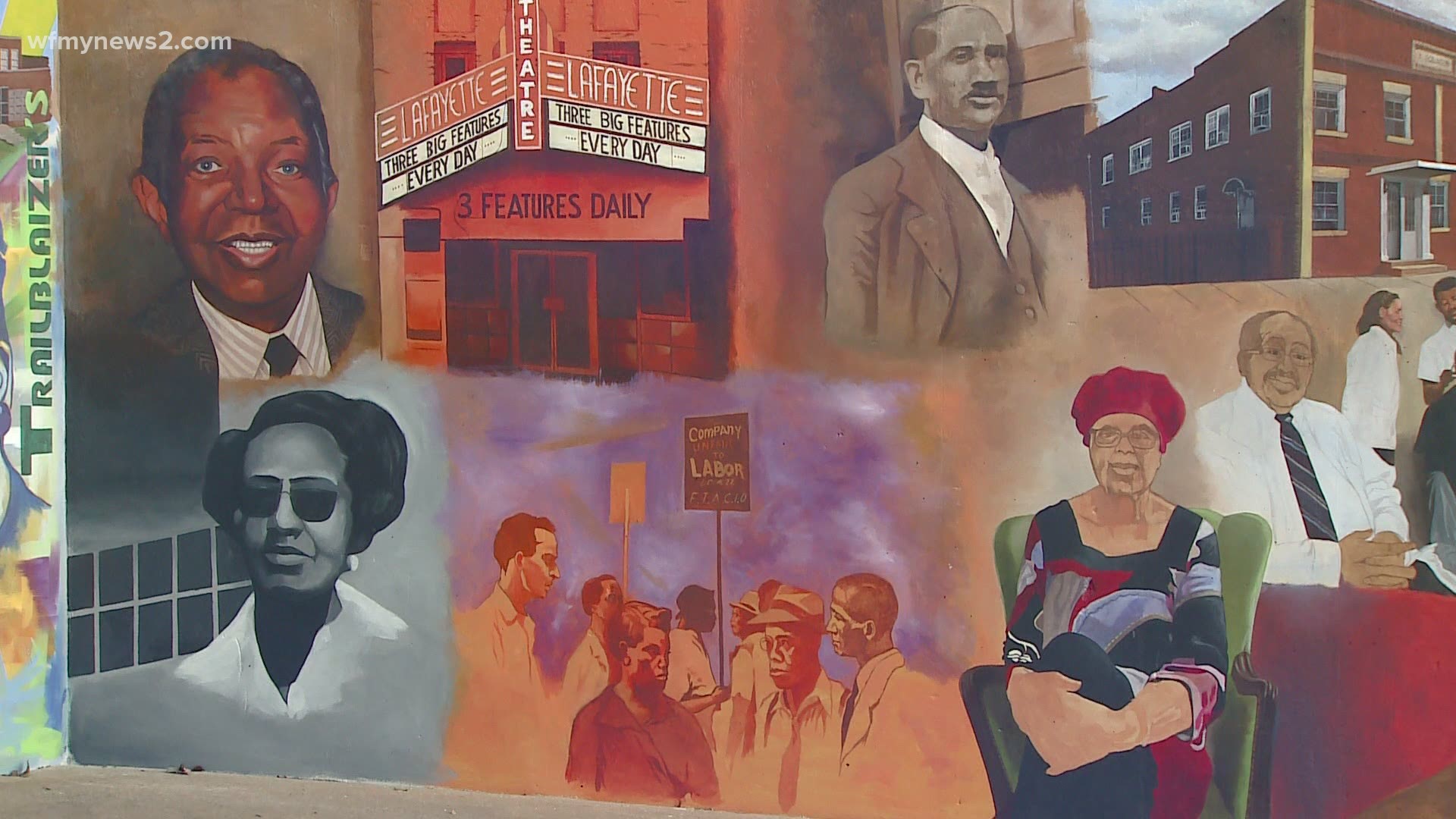 WINSTON-SALEM, N.C. — Innovation Quarter unveiled a new street mural by local artist Leo Rucker. The mural highlights the history and organizations in this section of downtown Winston-Salem near Depot Street, which is now Patterson Avenue.

During the late 19th and early 20th centuries, the area surrounding the former R.J. Reynolds Tobacco Company manufacturing facilities was known as the Depot Street neighborhood. The area was one of the first prestigious Black neighborhoods in Winston-Salem and remained as such with institutions like the Clark S. Brown & Sons Funeral Home, Patterson Avenue YMCA and Goler Memorial AME Zion Church having a continued presence.

The mural depicts more than two dozen people or buildings that reflect the surrounding history of Black entrepreneurs and leaders, Black-owned businesses, and community organizations, including Mo Lucas, who served for more than 50 years as director of the Patterson Ave. YMCA; Velma Hopkins, one of the organizers of the 1943 R.J. Reynolds worker strike; LaMae Beauty College, which opened in 1937; and Mary Burns, the first female president of the Safe Bus Company.

The mural represents the latest in a commitment to increased emphasis on racial equity, diversity, and inclusion in the Innovation Quarter, which is part of Wake Forest Baptist Health.

“Our commitment to racial equity and diversity includes celebrating the rich history that exists in the communities we serve,” said Dave McIntosh, PhD, vice president and chief inclusion and diversity officer for Wake Forest Baptist Health. “This new mural commemorates decades of Black history in entrepreneurship and community building and we are proud to help bring it to the Innovation Quarter.”

“Art has always been a wonderful tool to bring communities together and highlight our shared history,” said Lindsey Schwab, director of community relations for Innovation Quarter. “The area in which the Innovation Quarter now sits has such a rich history and we are grateful for the contributions of Leo Rucker and Inmar Intelligence in helping us celebrate that history.”

The mural is located on East 7th Street, between Patterson Avenue and Research Parkway.