GREENSBORO, N.C. — Weeks after suffering serious chemical burns, Shochu the kitten is back on his paws.

Jennifer McCollum took the nine-week-old kitten on Christmas Day suffering from full-body injuries. She speculates the previous owner may have used bleach to try and clean Shochu [pronounced Sho-zu], but she cannot be sure since she never met the previous owner.

"That's what it looked like, but that's pure speculation on my part," she said, "I've seen some not-so-great things over the years, and that's is kinda what this looks like."

"There were parts of Shochu falling off all over the place," McCollum continued.

Mayumi Osada, one of McCollum's friends, saw Shochu when he was first fostered and was heartbroken.

"It was obvious, he was in so much pain. I could feel his pain. He could barely move," Osada said.

A cat fanatic, Osada's home is littered with feline paraphernalia, kitten pictures, and cat toys. She's made many of the cat figurines herself, crafting them from clay when she's not working as a piano instructor at High Point University.

"They're considered good luck, especially in Japan, where I am from," she said.

In the past, Osada has auctioned spare Japanese creations from her home and the clay cats on Facebook to benefit various causes. Drawn to Shochu's name (in Japan, shochu is an alcoholic beverage similar to sake), she offered to start a fundraiser auction to help McCollum afford Shochu's veterinarian bills.

"I didn't know how much my [figurine] cats could help," Osada said, "But I wanted to do something."

In the month since McCollum began caring for Shochu, Osada's auction has raised nearly $2,600.

"It's been a lot of work, very time-consuming. I actually almost gave someone the wrong clay cats one time," Osada laughed, "but to see how far Shochu has come since the beginning is great. He has the greatest spirit about him; a wonderful energy."

"In Japan, if a bowl is broken, instead of discarding it, they use gold to patch it together. The more breaks you have, the more valued it becomes," Osada said, "Things break. That's a natural part of life. So instead of having a perfect thing, [the broken item] is seen as more beautiful.

After weeks of bandages and helpful care from Greensboro's Sheets Pet Clinic, Shochu is well on the road to recovery and seems, according to McCollum, in good spirits. He still has a few more weeks of treatment before he's put up for adoption, but the money Osada raised should be enough to cover the rest of the expenses, McCollum estimates.

"I'm so grateful for her," McCollum said.

“His healing has been remarkable. Far faster than we expected. The burns covered more than a third of his body.” 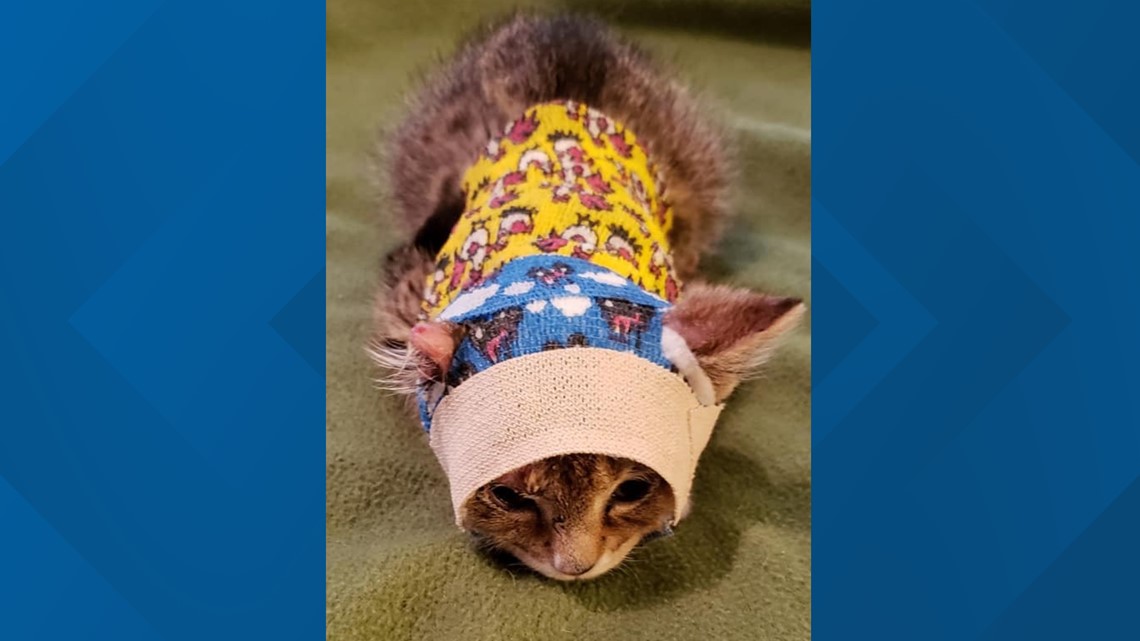 McCollum used to serve as the clinic's adoption coordinator. When Shochu is ready to leave her care, she plans to take on another furry project.

"Kitten season is around the corner," McCollum said, "I'm probably going to help another critical care kitten next!"

McCollum has been an advocate on social media for spaying and neutering cats, arguing the fix helps alleviate issues for many who take care of stray animals.

RELATED: Kitten Gets Stuck Under Car, Finds New Home With Greensboro Firefighter Who Saved Him