'We lost a hero today' | Mount Holly officer killed in the line of duty, two days shy of 26th birthday

A 24-year-old Mount Holly man was charged with first-degree murder in connection with the shooting of a police officer during a break-in Friday morning. 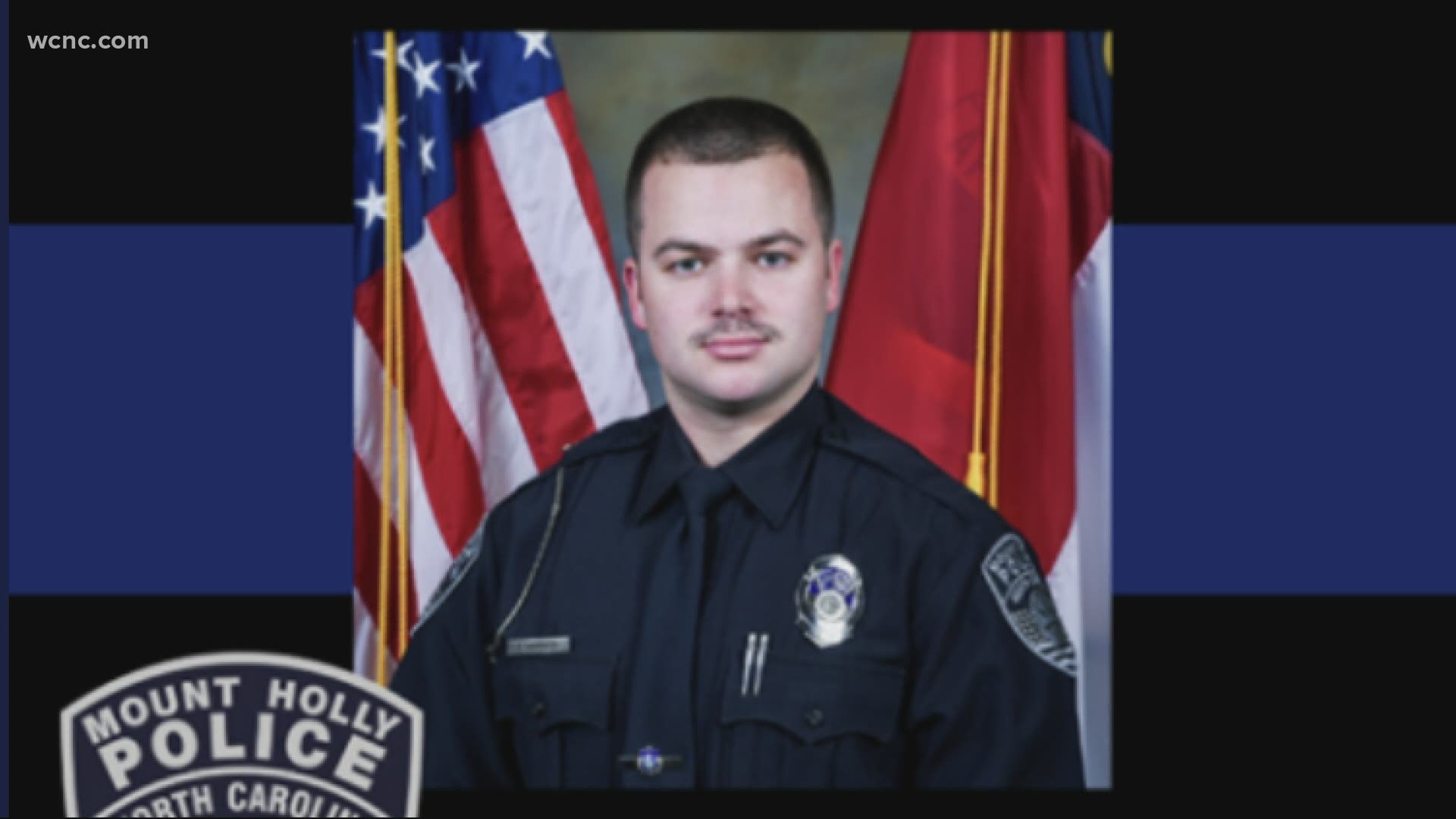 GASTON COUNTY, N.C. — Police in Gaston County, North Carolina arrested charged a man with murder after investigators said he shot and killed a police officer during a break-in in Mount Holly Friday morning.

Authorities say Officer Tyler Avery Herndon, 25, was shot and killed while responding to the active break-in at the Mount Holly Car Wash just before 3:30 a.m. Friday.

Joshua Tyler Funk, 24, was taken into custody and charged with first-degree murder. Funk is currently in custody at the Cleveland County Detention Center.

According to Charlotte-Mecklenburg Police, officers were responding to a break-in at the car wash around 3:30 Friday morning when they encountered an armed suspect. Multiple shots were fired between the suspect and the officers.

Officer Herndon was rushed to CaroMont Regional Hospital in Gastonia with serious injuries where he later died.

Pamela Spencer lives across from the car wash, and she recalled hearing several gunshots followed by loud sirens.

"I just saw a sea of blue and red. It was insane," Spencer said. "Oh my God, I feel so bad for the family."

Authorities say Herndon had been an officer with the Mount Holly PD for less than 2 years. He was killed two days before his 26th birthday.

"His twin sister should be celebrating her 26th birthday on Sunday, not likely to happen," said Rob Tufano with the Charlotte-Mecklenburg Police Department. "They're planning a funeral two weeks before Christmas."

Mount Holly Police Chief Don Roper spoke during an afternoon news conference to remember the life of one of his officers. Chief Roper described Herndon as a selfless man who just wanted to serve his community.

"I've been along for a long time and one of the things I can do is read potential in young police officers, and Tyler had that potential," Chief Roper said.

Chief Roper said everyone in law enforcement understands the risk they take every day when they put on their uniform and said Herndon was no exception.

"He was willing to accept those risks to serve this community and the people and citizen thas he loves," Chief Roper said.

The entire Mount Holly Police Department is hurting, but Chief Roper said they will rely on each other to get through this.

"The law enforcement community turned out today to support a brother, to us and the community," he said.

During the news conference, Chief Roper spoke directly to the community. He asked everyone to take care of one another.

"Please let this remind all of us to take care of each other and recognize the sacrifice that a lot of us make so that our communities can be good places to raise families," Chief Roper said.

Chief Roper went on to praise Mount Holly stating it was a great place to raise a family, start a business

"That doesn't just happen," he said. "It takes a lot of people and a lot of effort."

Herndon's body was escorted to the Medical Examiner's office by motorcade Friday morning.

Court records revealed Funk had several pending cases this year, including an arrest for felony larceny in Morresville in October, and several traffic tickets in Mecklenburg and Catawba Counties.

Two other Mount Holly police officers and a Gaston County police officer were also involved in the incident. The three officers have been placed on administrative leave to ensure their respective department policies and procedures were followed.

#BREAKING On scene of an officer involved shooting in Gaston County @ the Mt. Holly Car Wash. Happened 3:40 am. 3 people were taken to CaroMount Regional Medical, unsure if any transports were officers. Live report ahead on @wcnc pic.twitter.com/JHVX7tG5wH

NC Highway 273 was closed for several hours as detectives investigated the shooting.

Our prayers are with family and friends of Mount Holly Police Officer Tyler Herndon who was killed in the line of duty this morning protecting the community he loved. I spoke with Tyler’s parents and Chief Roper to offer our support and deepest condolences. - RC