She prayed by her husband's hospital window every day as he battled COVID-19. Then, someone unexpected prayed beside her.

Melissa Baker thought her husband was on his deathbed and prayed twice a day at a hospital window. Her handprints were noticed by hospital staff who joined her. 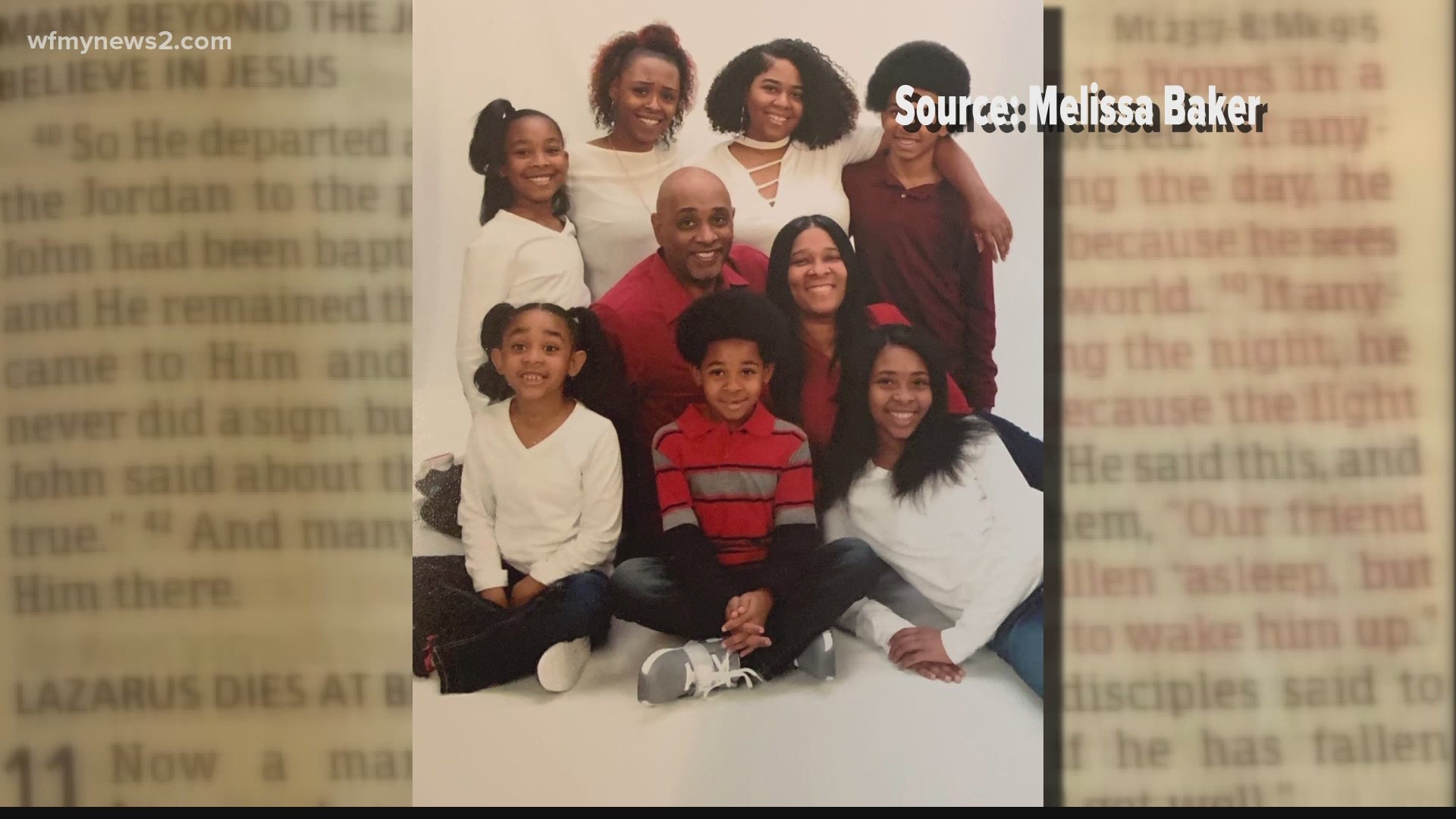 GREENSBORO, N.C. — A High Point woman leaned on her faith and an encounter with a curious hospital worker, to give her strength as her husband, a pastor, battled coronavirus.

Melissa Baker said that in early April her husband, 54-year-old Pastor Rory Baker was on what she thought was his death bed, sickened by COVID-19. Before he fell ill, Rory Baker, a father of seven, who leads Fruit of The Spirit Ministries in Greensboro, had no serious underlying condition that they knew about, according to Melissa Baker.

"So I said, 'OK, it'll be a couple of days and he would be home,' and unfortunately that was not the case," she said. "The doctor called and that was on the fifth. He called just to kind of let me know what was going on and what the next step would be if there was no improvement. That Monday, April 6, I did get the call that evening, that night, that they were getting ready to place him on the ventilator. When I initially got the call that the ventilator will be the next step, I just felt like, 'If I could get to the hospital, I could be closer to him and that will bring me a sense of peace."

So, Melissa Baker went to High Point Medical Center and laid her hands on the window and prayed there twice a day in search of a miracle.

Melissa Baker said when she was at the window, she would place a picture of a healthy pair of lungs on her bible. She meditated on the book of John, chapter 11, verse 1-45, which tells the story about a miracle performed by Jesus where he raised a man named Lazarus from the dead.

"I would often just tell them not to give up on my husband, that he was a fighter and my faith was in God and I asked the doctor, 'What is it that we need to pray for? Myself, my family and my church family and my community? What should we pray for?" Melissa Baker said about her Facetime calls with the medical staff.

She said she prayed for the doctors, the nurses, other hospital staff who came in contact with her husband and other patients in the hospital who were also battling COVID-19.

"I continued to go to the hospital in the mornings and pray, and I will put my handprint on the glass and I will go back in the evening and I will continue to pray," Melissa Baker said.

She said she did this several times, undisturbed, until one Sunday when a hospital fitness staff member, Rodney Simpson, spotted her and walked up to her and struck up a conversation.

"I did tell him that I was the one placing the fingerprints on the glass and explained to him that my husband was a patient in the hospital and that he was still on a ventilator and I had come by praying each day," she said.

Initially Melissa Baker thought he was going to ask her to leave but instead what she said Simpson did next was unexpected.

"He asked me if he could pray with me and at that point I started to pray, and I prayed, and when I stop praying, he started to pray," said Melissa Baker, overcome with emotion. "It really just blessed me. It blessed me because I knew his words were sincere and at that moment I truly felt like he was an angel from the Lord and that God was truly hearing my prayers," she said.

She said when Simpson joined her and offered her words of comfort and hope through his prayers, it helped strengthen her resolve.

"I was so grateful and so thankful and he told me that he will continue to pray for my husband and I continued to walk and pray on that day," Melissa Baker said.

She said she believes her encounter with Simpson was the boost she needed in that moment of despair by the window.

Her husband was released this week from the hospital after testing negative to COVID-19 three times. However, Rory Baker still remains on a ventilator as he undergoes rehabilitation toward breathing on his own and recuperating from his bout with a virus that has killed nearly 95,000 people and sickened more than 1.6 million people in the United States so far, with 306,000 having recovered.

Simpson was unavailable for comment at the time of this publication but Melissa Baker said she's sharing the story of their meeting by the window to say thank you to health workers like him who helped her husband and inspire others.

"I just wanted to encourage everyone who may be experiencing something similar to what I'm going through to just continue to keep that faith in God," Melissa Baker said.

RELATED: 'We were ready to go' | Triad small gym owners upset with decision to keep their businesses closed in Phase 2

RELATED: 'Excited and anxious' Some Triad businesses prepare to open while others wait

RELATED: 'We weren’t 100% ready for it' | Some bars breathe sigh of relief after being excluded from phase two