The Guilford County Sheriff's Office said this was a planned, targeted attack. Several students from other GCS schools got into the building through a propped door. 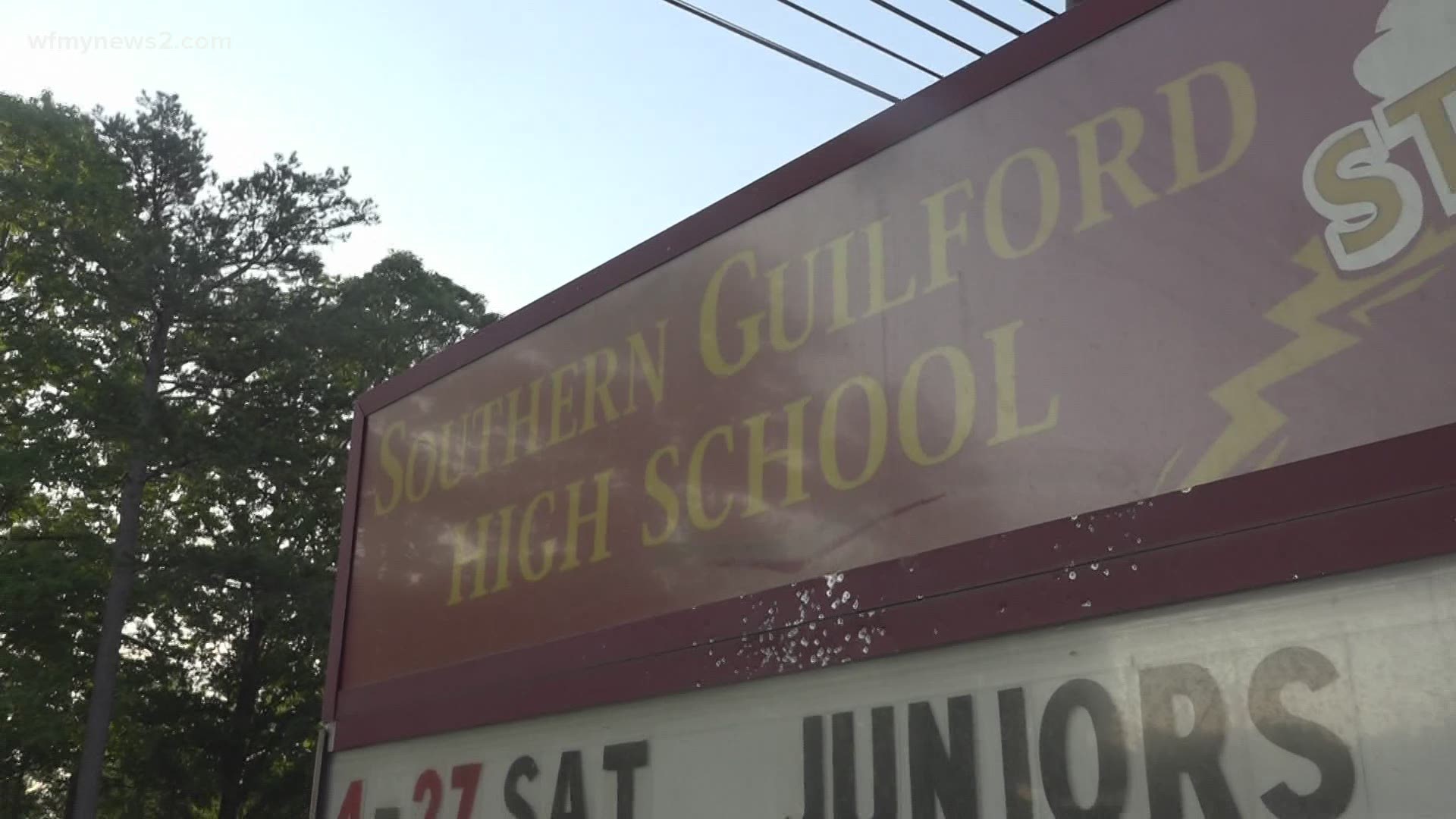 GUILFORD COUNTY, N.C. — According to the Guilford County Sheriff's Office, eight people, including one parent, conspired to infiltrate Southern Guilford High School and attack one student in the middle of class, and they did just that.

"What we can determine at this point - not counting the student who was the target of the attack - there were eight people who came in with intentions of participating in the attack," School Resource Officers (SRO) Captain Brian Hall, with the Guilford County Sheriff’s Office, said.

"Yes, one of the students did show up with their parent - their mother came. So, she participated not only there just for support for her student, but actually, participated in the assault as well," Captain Hall explained.

"Yes, ma’am, that was a deeply disturbing part for us. You look at parents as the ones who are supposed to be giving the kid guidance as to how to handle these types of things, not encouraging it," Hall added. "That’s what we had in this case - a parent that went too far and participated with their child in clearly criminal behavior."

The GCSO tells me a parent and 7 GCS students stormed Southern Guilford High - and assaulted a student in the middle of class Tuesday. @WFMY pic.twitter.com/VHpGY1Rou7

How did this all start?

"We found out it stemmed from an earlier altercation the day before at a bus stop, so this was some sort of a revenge effort against the student," Hall said.

Hall said the attack happened Tuesday, so the argument at the bus stop occurred on Monday. He doesn't know exactly what the argument was about.

Many people have questioned - how did the individuals who don't attend Southern Guilford get in the school? Aren't there locked doors and other safety measures in place?

"So, basically if you look at the school, all the doors from the outside are locked but once you open a door, you can hold it open as long as you like," Hall explained. "There were two students who were not even related to this incident going out, and the one student who started this fight basically just ensured this door stayed open long enough for her friends to come in. As soon as they came in, they all went straight upstairs to the classroom of the student they were there to fight, and basically walked in the classroom and began assaulting that student."

Hall said it was around 9:45 a.m. when all eight stormed into the classroom and the beatdown began. He said teachers, administrators, and the SRO immediately intervened.

"The one student's injuries were minor, but when it's an assault on our students or anyone, you think what if it was your child," Hall said. "Any type of assault is going to be serious. The injuries were not severe. The student was released and went home to their parents, but we take it all very seriously."

A spokesman for Guilford County Schools said they are aware that several individuals entered the building, and one student was injured. He said it's still early in the investigation, but added that it seems like all protocols were followed. Once the investigation is complete, the district will review protocols.

"That’s the unfortunate reality of these things. We do so much to try to keep kids in the building safe, and there are so many protocols they follow in terms of access, control, and cameras, and every door is locked," Hall added. "But this just goes to show something as simple as a kid propping a door - it shows you - do everything you can possibly do to keep kids safe, and then something like this can still occur."

No one was arrested that day, but Hall said charges are forthcoming.

"It's real easy to grab a whole bunch of people at the time things are going on, and you might grab someone who was trying to break up the fight, so we slow these things down once the initial chaos is over. We want to make sure we’re methodical and make sure the right charges are put on the right people," he said.

Charges are expected to come down today including Inciting and Riot, Assault, and First Degree Trespassing, according to the Guilford County Sheriff's Office. @WFMY pic.twitter.com/fA3tshwDHR

What charges could the eight people be facing?

"There will be charges for inciting a riot, and that statute just basically says if three or more people come together to create a disturbance where there is potential for violence or property damage that meets the elements for that," Hall explained.

"The other charges we are filing in this are misdemeanor assault for everyone involved and first-degree trespassing."

He said the charges were expected to come down Thursday, but the Sheriff's Office said they still haven't been signed off on as of 6 p.m.

"Whenever you have a large fight or something like this, I think the knee-jerk reaction is to start looking at what we need more of: do we need more cameras? Door locks? Those things are great, we’ll take all we can get, but the number one thing we need to look at, at a district level, is how we can create an environment in the school system where a kid would never dare do something like this in the first place."

The names of the adults involved, one parent and one 18-year-old student, will be released when charges are officially filed. The six juveniles will not be named.

An all-call went out to Southern Guilford parents the day after the incident. Here is the transcript from the recording:

Good afternoon Southern Guilford High parents, this is Principal Dr. Muller with an important message. Yesterday morning several individuals came onto our school campus and caused a disruption in a classroom injuring one student. Our staff and law enforcement officers responded quickly and all the intruders were found by administration and police. Administration and law enforcement are conducting a full investigation. In addition I personally met with all the students in the classroom where this took place and also notified their parents. I also met with our faculty and staff to discuss the incident and to reinforce our safety protocols. While we are thankful for our teachers staff and officers for the quick response in follow our safety protocols I also want to remind everyone that if we hear something or see something we always need to say something. If you prefer to stay anonymous you may also call crime stoppers at 336-373-1000 or submit a confidential tip online. Student and staff ID badges must be worn at all times. While locked doors and buzzers and other technology help with safety – people make the biggest difference in keeping our school safety. So thank you for your assistance and your support of Southern High School. 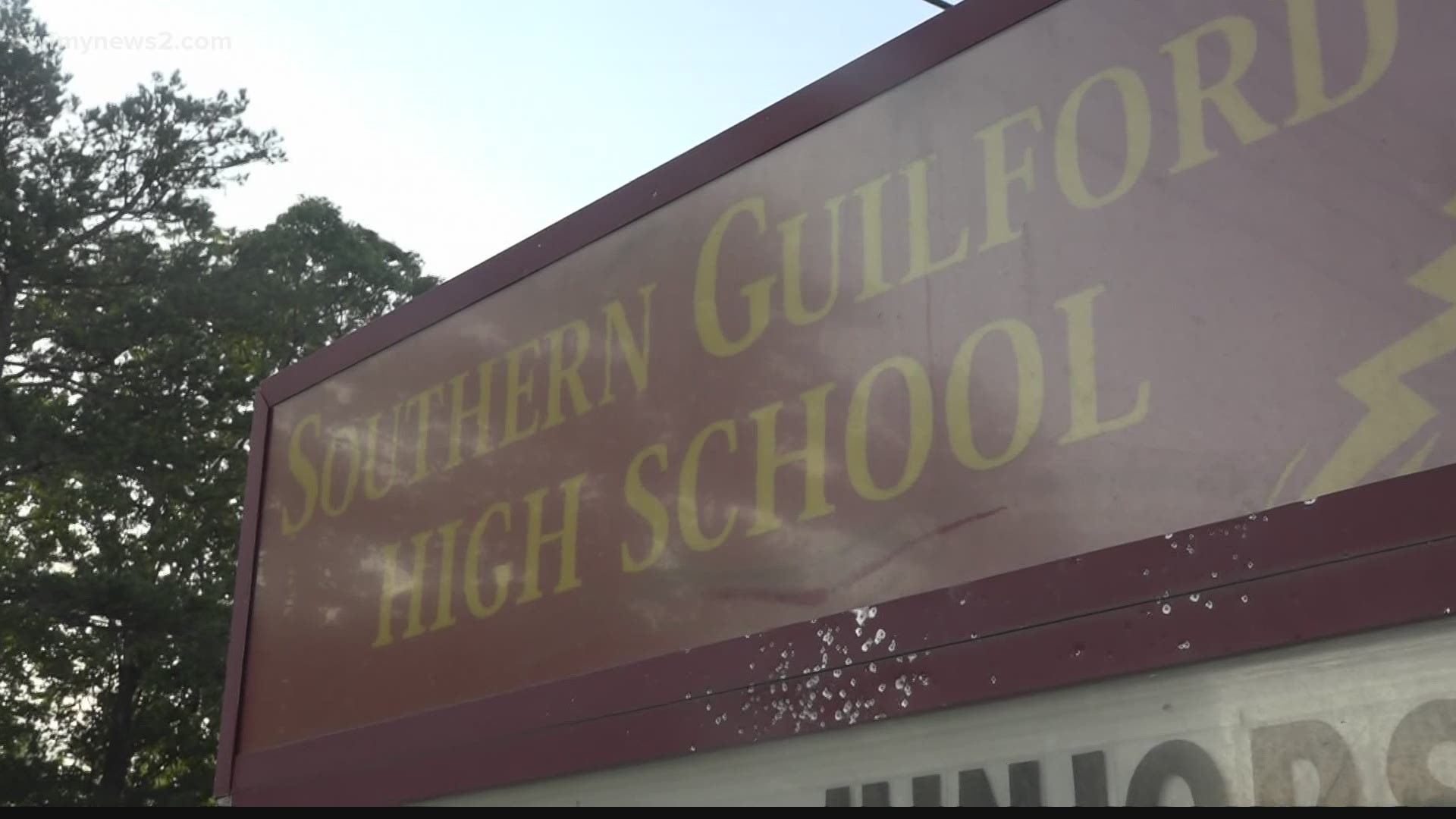 TOP STORY: Did you get the $335 check from NC? See if you're eligible