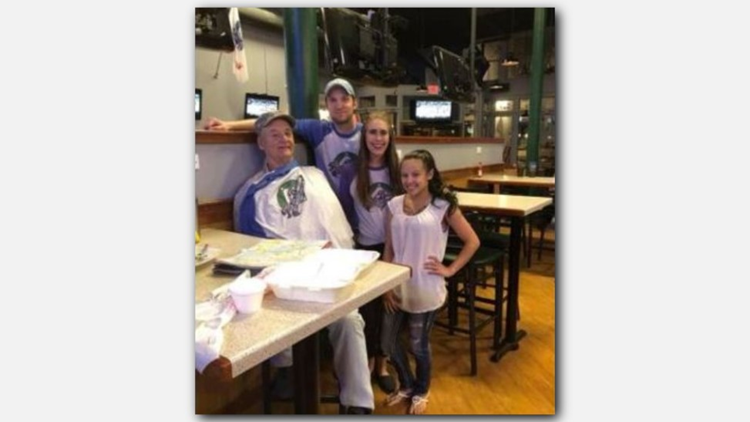 FAYETTEVILLE, NC - Actory, Comedian Bill Murray is known for being Hollywood's biggest party crasher and baseball aficionado. This week he gave one another once-in-a-lifetime story to the staff of a North Carolina restaurant.

A photo of the actor with the staff of Third Base Restaurant and Bar in Fayetteville had been shared over 100 times on their Facebook page Wednesday afternoon. The Fayetteville Observer caught up with the staff, who were still in disbelief that Murray stopped in.

“I was skeptical,” 23-year-old Cassidy Rae Reites, who took Murray’s order, to the newspaper.

What did he order? Murray got a Cheerwine, two orders of onion rings, fries and a hamburger with bacon and fried egg, but no cheese, Reites told the reporter.

Why was he in Fayetteville? Murray told them he was on his way to Philadelphia and stopped in Fayetteville to check on the progress of a new baseball stadium, which is under construction near the restaurant.

Bill Murray is a huge Chicago Cubs fan and has part ownership of numerous minor league teams, including the Charleston RiverDogs, where he's listed as the team's 'Director of Fun.'

After his burger, Murray left a $100 tip and hit the road.