A spokesperson said floodwaters were continuing to overtop an earthen dike at the north side of Sutton Lake, a 1,100-acre reservoir at the L.V. Sutton Power Station. 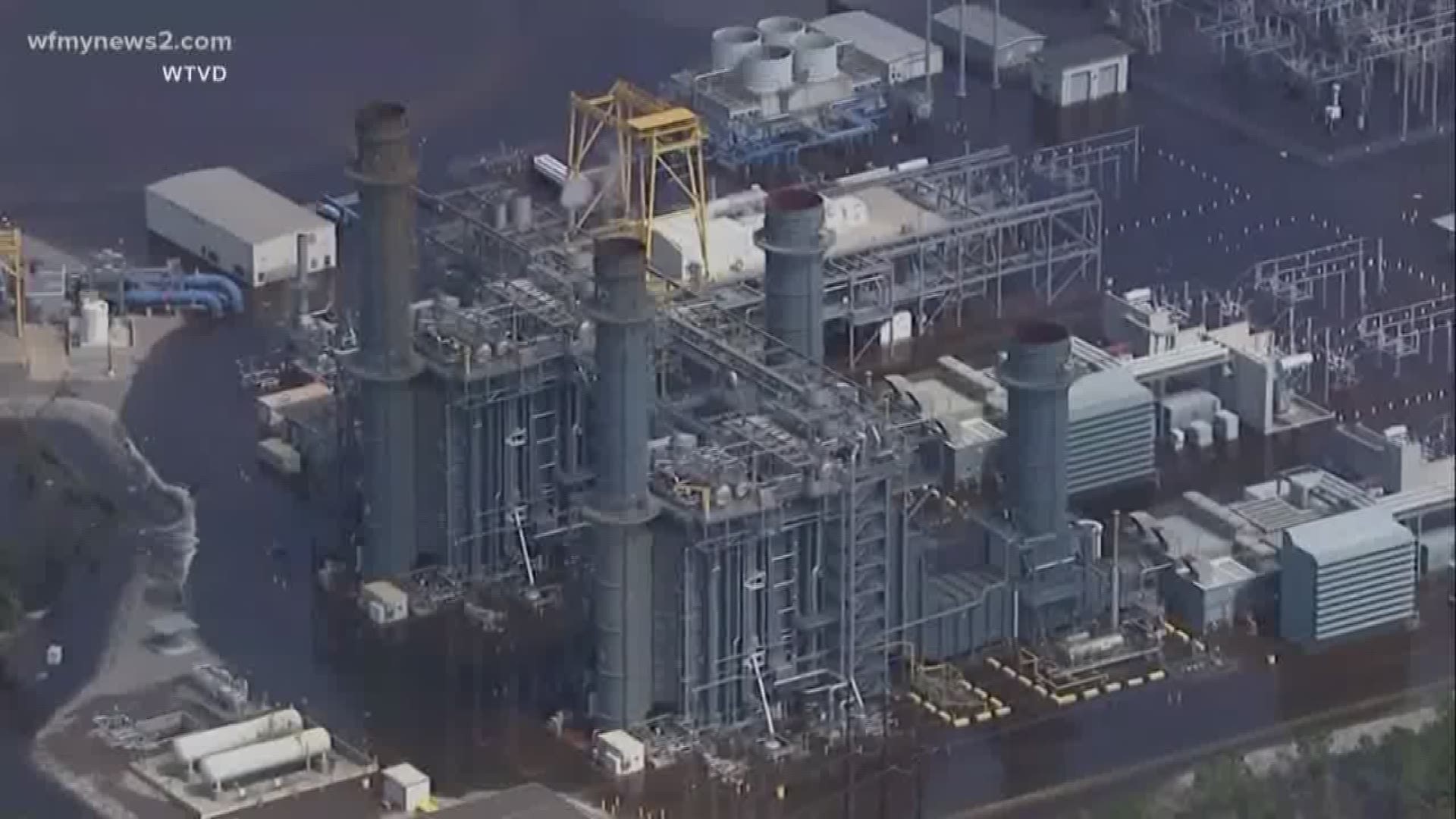 WILMINGTON, N.C. (AP) — Florence's floodwaters breached a dam holding back a large reservoir at a Wilmington power plant Friday, and coal ash from an adjacent dump could be flowing into the nearby Cape Fear River.

Duke Energy spokeswoman Paige Sheehan said the company does not believe the breach at the L.V. Sutton Power Station poses a significant threat for increased flooding to nearby communities because the river is already running high after the hurricane.

Floodwaters from the Cape Fear opened several breaches overnight in the earthen dam at Sutton Lake, a 1,100-acre (445-hectare) reservoir at the power plant. Water from the lake then flooded one of three large coal ash dumps lining the lakeshore.

RELATED | 4 Ways To Check Rising River Levels Near You

Sheehan said the company can't rule out that ash might be escaping from the flooded dump and washing into the river.

Gray material that the company characterized as "coal combustion byproducts" could be seen floating in both the lake and river Friday.

North Carolina Department of Environmental Quality released this statement about the incident:

"Teams from three Department of Environmental Quality regulatory divisions have been closely monitoring conditions at Duke Energy’s Sutton facility, remaining in close contact with onsite engineers throughout the week. During that time, floodwaters from the Cape Fear River have flowed into Sutton Lake on the north side and back into the river on the south side. This morning, state dam safety officials were notified of a dam breach of between 100 and 200 feet at the south end of Sutton Lake. Additional reports indicate there are other smaller breaches in the dam. Although river flooding has approached the two inactive coal ash basins at the facility, it appears there are currently no structural issues with those impoundments. DEQ’s dam safety engineers are now coordinating with NCDOT to conduct drone inspections to determine real-time site conditions. While the state is currently in emergency response mode, a thorough investigation of events will soon follow to ensure that Duke Energy is held responsible for any environmental impacts by their coal ash facilities."

The ash left over when coal is burned to generate electricity contains an array of components, including mercury, lead, arsenic and other toxic heavy metals. Duke said Friday that the inundated basin at the plant contains about 400,000 cubic yards (305,820 cubic meters) of ash.

Floodwaters at the site were continuing to rise Friday. The area received more than 30 inches (75 centimeters) of rain from former Hurricane Florence, with the Cape Fear River expected to crest Saturday.

"What we don't know at this point is if any coal ash has filtered into the Cape Fear River," said Mike Regan, secretary for the state Department of Environmental Quality. "We plan to conduct flyovers ... to see if we can ascertain that."

Security personnel for Duke blocked access Friday to Sutton Lake Road, which leads to a public dock on the reservoir, a popular local destination for boating and fishing.

Duke denied a request for an Associated Press reporter at the scene Friday to pass the barricade, saying that the situation at the lake "continues to change" and is "not safe." Aerial photos released by the company showed a wide breach in the earthen dam and the affected ash dump largely underwater.

Sutton Lake is the former cooling pond for a coal-fired plant Duke retired in 2013 and replaced with a new generating station that runs off natural gas. Duke said that power plant was shut down overnight as it was swamped floodwaters and all employees safely evacuated.

The current breach at the Wilmington site is separate from the rupture at a nearby coal ash landfill reported at the site last weekend, spilling enough material to fill 180 dump trucks.

Duke's ash waste management has faced intense scrutiny since a drainage pipe collapsed under a waste pit at an old plant in Eden in 2014, triggering a massive spill that coated 70 miles (110 kilometers) of the Dan River in gray sludge. The utility later agreed to plead guilty to nine Clean Water Act violations and pay $102 million in fines and restitution for illegally discharging pollution from ash dumps at five North Carolina power plants. It plans to close all its ash dumps by 2029.

At the separate Duke plant near Goldsboro, three old coal-ash dumps capped with soil were underwater Thursday after the Neuse River flooded.

Staff from the Waterkeeper Alliance, an environmental group, visited the flooded dumps at the H.F. Lee Power Plant by boat Wednesday and took photographs and collected samples of gray sludge and water they said was washing into the floodwaters. The group said a private lab would analyze samples.

State environmental regulators went to the site Thursday, though they were unable to make a full assessment because of high water levels.

Sheehan, the Duke spokeswoman, said that any release of coal ash at the Goldsboro site appeared "minimal."

'We Thought We Made It. Nope!': Three Neighbors' Quick Thinking Saves Their Houses