"I believe this would be a terrible thing, to have someone seriously injured or killed in an altercation that began as protecting the memorial." 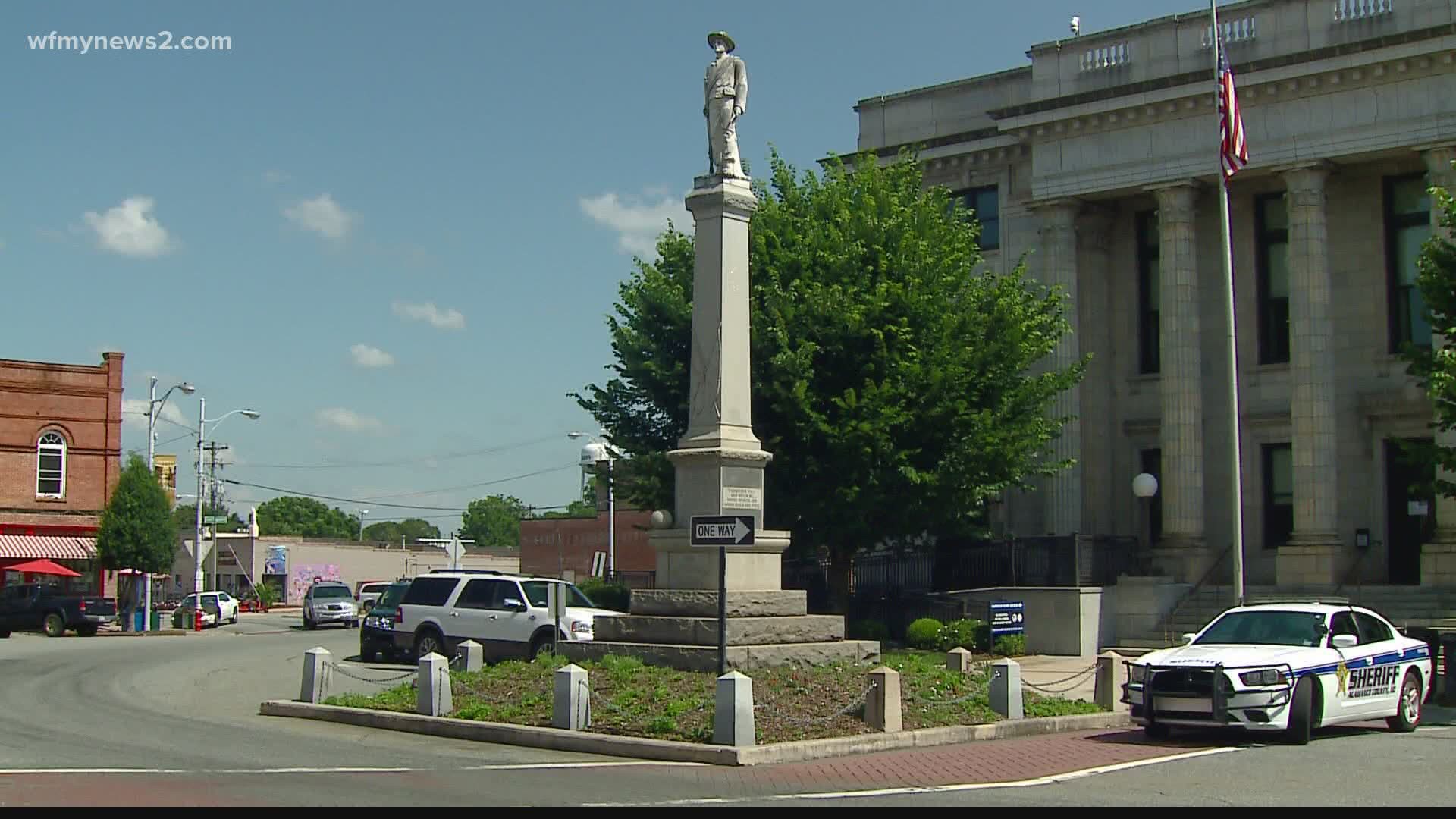 GRAHAM, N.C. — The fight to take down confederate monuments is nothing new, but has been reinvigorated since the death of George Floyd.

RELATED: Statues toppled, defaced throughout US in anti-racism protests

The soldier in Graham that stands in front of the old courthouse has been a topic of debate for years, but it's now more heated than ever

Alamance County manager Bryan Hagood put the pressure on the Alamance County Board of Commissioners by sending an email urging them to remove and relocate the statue.

The email reads in part:

”We are currently relying on our sheriff’s office to protect the confederate memorial as it is county property. I believe it will come to a point where the deputies will have to choose to use potentially deadly force in the course of doing so. I believe this would be a terrible thing for Alamance County, to have someone seriously injured or killed by one of our deputies or officers in an altercation that began as protecting the memorial.”

Hagood isn’t the only one who is applying pressure on county leaders.

"I want to see change, not just hear about it but see it," Krystal Ortiz said.

Ortiz started a change.org petition to take the Graham monument down, garnering more than 15,000 signatures as of Monday.

"Alamance County is my hometown," Ortiz said. "To me, the statue is not heritage to everyone so it shouldn’t be represented as heritage."

But Alamance County Vice Chairman Bill Lashley told WFMY News 2, it's out of their hands.

Lashley said Alamance County Commissioners do not have the authority to take down the statue, citing the protection of a 2015 historical monuments law.

Even though Governor Cooper used this clause to take down several confederate statues in Raleigh this weekend.

“An object of remembrance may be relocated if it poses a threat to public safety because of an unsafe or dangerous condition.”

Governor Roy Cooper removed several statues from Raleigh over the weekend, but this was not a state-wide order.

Graham Mayor Jerry Peterman said they have not been ordered to take the Graham monument down, also stating he does not have the authority.

"The state does protect the statue right now and we swore to uphold the laws of the state and the Constitution of the United States."

RELATED: 'I got hit in the face': Two men arrested during protests at Graham Confederate statue

Mayor Peterman said that the soldier is on North Carolina Department of Transportation property (NCDOT).

"Everyone assumes that it's within the city of Graham’s purview, but it is not," Mayor Peterman explained. "The statue is standing on NC highway 87 Road that’s maintained by the DOT and actually owned by the United Daughter's of the Confederacy."

When WFMY News 2 reached out to the Governor's Office to see if there were any state-wide confederate monuments plans, we were referred to the NCDOT for this particular case.

"It's in an interesting spot, it's on DOT, property sitting in front of the old county courthouse in the middle of the county seat so it’s an interesting problem," Mayor Peterman said.

A spokesperson for the DOT said information will be released on Tuesday, June 23.

Mayor Peterman doesn't believe the monument should come down, but encourages the conversation.

Vice Chairman Bill Lashley also does not believe the monument should come down, adding that 'Governor Cooper is a disgrace to North Carolina,' for taking the ones in Raleigh down over the weekend.

Lashley said the fate of the monument will most likely be discussed at the next public meeting on July 6.