'I got hit in the face': Two men arrested during protests at Graham Confederate statue

Protesters and counter-protesters gathered at the base of the monument. A video that appears to show the assault and arrests was posted on Twitter. 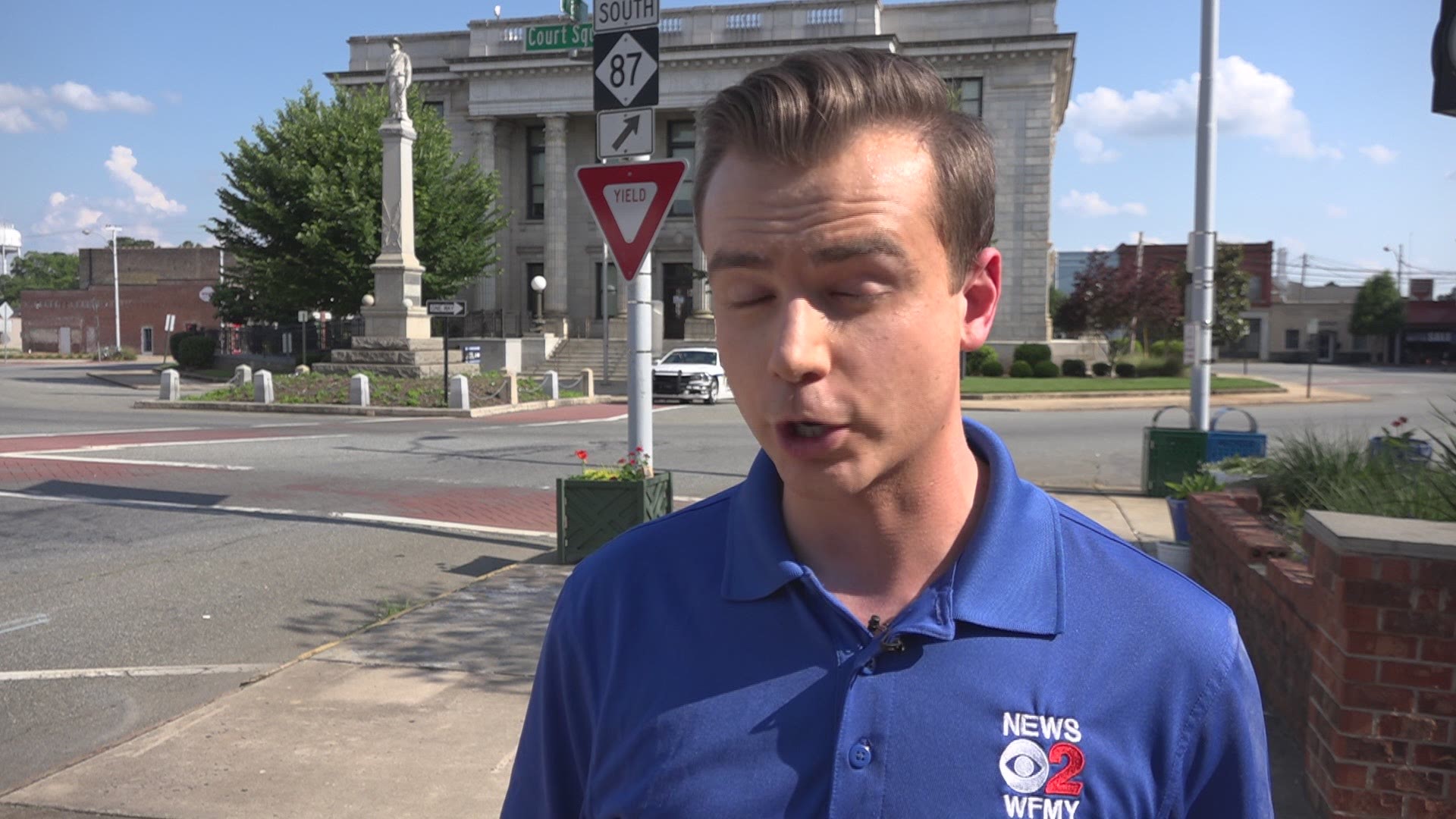 GRAHAM, N.C. — Police arrested two men during protests over the Confederate soldier statue in Graham on Saturday night, according to the Alamance County Sheriff's Office and the City of Graham.

Protesters and counter-protesters gathered at the base of the monument outside the courthouse, leading Graham's mayor to issue a 9 p.m. curfew and State of Emergency to prevent injuries and property damage.

The statue was dedicated in 1914, sponsored by The United Daughters of the Confederacy. The Confederate monument's concrete base holds a copper box containing the names of 1,100 Confederate soldiers in the Civil War from Alamance County, according to a UNC Chapel Hill history site.

Police arrested Chadrick Ray Hightower, 49, charging him with Disorderly Conduct. Hightower, a resident of Burlington, was observed by an officer swinging his hand at a person taking photographs, according to the City of Graham. He posted $350 cash bond.

Graham Police also arrested Gibsonville resident Christopher Wayne Overman, 39, and charged him with assault on a female. Overman struck Megan Squire in the arm, according to the City of Graham. He posted a $500 cash bond.

A video that appears to show the assault and arrests was posted on Twitter by Megan Squire, who police say was the victim of the assault by Overman. Squire told WFMY News 2 she was at the Confederate monument with her husband as part of an anti-racist protest group.

The video begins with a woman walking away and hitting a man's camera. A man then engages the person taking photos and attempts to hit his camera. A Graham Police officer then tells the man to place his hands behind his back and handcuffs him.

Alamance County Sheriff Terry Johnson then walks into the frame and speaks with the man being arrested.

Another man then appears to hit the person recording the incident, saying "get your phone out of my face now." Graham Police officers then arrest that man.

The video ends with Sheriff Terry Johnson telling the group, "Ya'll better calm. You have the right to protest peacefully."

Squire shared her account of the events with WFMY News 2:

"The context of the video is that a man in a Batman shirt and a woman were berating a group of anti-racist activists who were talking to the Mayor of Graham, Jerry Peterman. The man and woman seemed agitated, and when they began walking towards my husband, I became worried so I started filming them. Good thing I did because they both lashed out at him. Then I got hit in the face by a different man while filming the arrest."

The Alamance County Sheriff's Office told WFMY News 2: "We do not plan to have a lot of deputies in Graham today, but we are always ready to respond to any issues that arise and to assist our partners at the Graham PD. Hopefully, folks will enjoy fathers day today and have some peace. We certainly need some peace."

'We are calling for the statue to come down'

The Alamance County Chapter of the NAACP released a statement on Sunday, calling for the statue to be immediately removed from in front of the historic courthouse in Graham.

"It's one thing to remember your history and do it in the context of a museum or battlefield, somewhere you can have context. But to glorify it in a public square where, especially symbolically everyone has to come, is just inappropriate," Brown said.

"Those statues commemorate and celebrate armed rebellion in this country, and any kind of justification for why they should be in public spaces, it supports a white supremacist mythology," Brown said. "That tends to romanticize and misconstrue what the facts are. The Civil War was fought over slavery. To pretend that the veneration of people who fought to protect and preserve slavery, to pretend its something other that it is is a specious argument."

Brown said he is also opposed to law enforcement standing by near the statue in Graham.

Graham residents split over the statue

Lifelong residents of Graham spoke with WFMY, sharing vastly different perspectives about what the statue represents and means to them personally.

Austin Davis supports the statue remaining where is currently stands in front of the Graham courthouse.

"The statue has been there forever. It doesn't represent anything to do with racism or slavery. A lot of us around here have ancestors that were in the Civil War, some on one side, some on the other, some on both sides. It's not about slavery, it's about preserving the memorial of our ancestors who fought and died in that war," Davis said.

Another Graham resident, Yolanda Strickland, believes the statue should be removed.

"As a Black person, as an African-American from Alamance county, my parents, my grandparents, and their parents were and probably are highly offended by the statue, basically because it represents hate, it represents a hateful heritage. It represents the loss of a fight that was to keep my people and other Black people slaves enslaved. It was for the right to own another human and I just can't see how it's justified," said Strickland.

RELATED: How dads are important for their teen's development