Neighbors are using yard signs to spread the message about racial injustice and to show support for protesters. 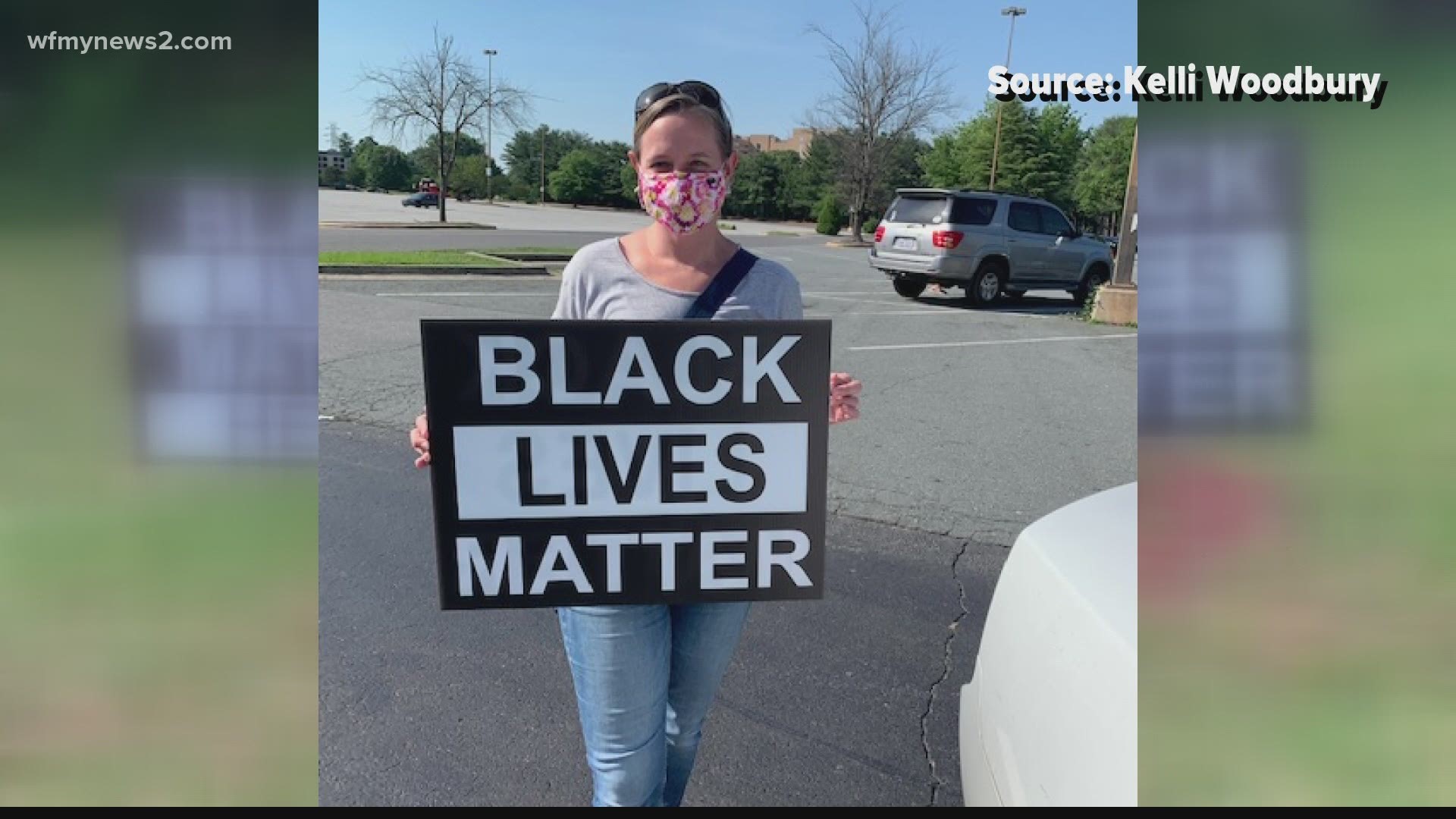 GREENSBORO, N.C. — The demonstrations are encouraging dialogue about race and some Triad women are spreading the message about racial injustice, one sign at a time.

Signs and apparel with the slogan 'Black Lives Matter' are no longer just a common sight in predominantly African-American neighborhoods.

After the murder of George Floyd sparked protests and riots, signs with the slogan and people wearing t-shirts with it are spreading into other communities.

"I wanted to get the signs out so that people can have a voice, for people who didn't want to go to the protest for whatever reason be it because of COVID-19 or for different reasons," said Kelli Woodbury. Woodbury is an events planner who runs MK Events and Creations based in Winston-Salem.

She went from making graduation yard signs to honor the Class of 2020 but is now making Black Lives Matter yard signs.

She said people reached out to her asking for the signs because they wanted to show their support for the black community.

"It has been mostly Caucasian people and I was very surprised because I didn't know that they would want to be a part of it, because like I said, it has been a very diverse audience this time so I was very appreciative," added the mom of two with one on the way.

Woodbury said some neighborhood associations have ordered the signs in bulk and are making them available to residents.

"That just means a lot to me as an African-American mother, and I have a son," she added.

"I think it's very important as a white person to make your voice loud and clear," said Wanda Cox, a community organizer in Davidson County.

Cox too wants to help make her neighbors and those in her community pay attention to issues affecting their neighbors who don't look like them.

"It's an extremely sad time for me because I remember the 60s as a child. I remember segregation and integration and I really thought that we had gone beyond this point in our country," she said.

"To see the sadness resurfacing is quite disturbing and when I go to talk to my non-white friends over the last week it has been this level of sadness that's unbelievable because they feel a different level of pain than me," said Cox.

Cox bought dozens of the signs for her neighbors to put in their yards and show where they stand. The sign literally reads 'Take A Stand -- Say No To Racism.'

"I've always used my voice but I wanted to use it on a louder platform and I came out with the idea of a yard sign as just a nice way to say racism isn't allowed in this house. A very subtle way of being able to say there's no racism allowed here and it speaks volumes when you're not outside speaking," she added.

So far about 150 signs have been sold all together and some of the money for the sale of the Davidson County signs will go towards a community scholarship for minority children.

For more information, you can directly contact MK Events and Creations 336-497-1721 or email wandawcox@aol.com.

1 / 17
Burlington Police Department
Burlington Police Chief Jeffrey Smythe held a sign given to him by a protester. He then brought it back to his department for his fellow officers to hold for a photo to show their solidarity.

RELATED: What is George Floyd’s connection to North Carolina?

RELATED: How to talk to your kids about protests happening across the country