Kenneth Brown converted his love for cartoons and comic books to conversation-art pieces for kids who walk past 1618 Downtown restaurant in Greensboro. 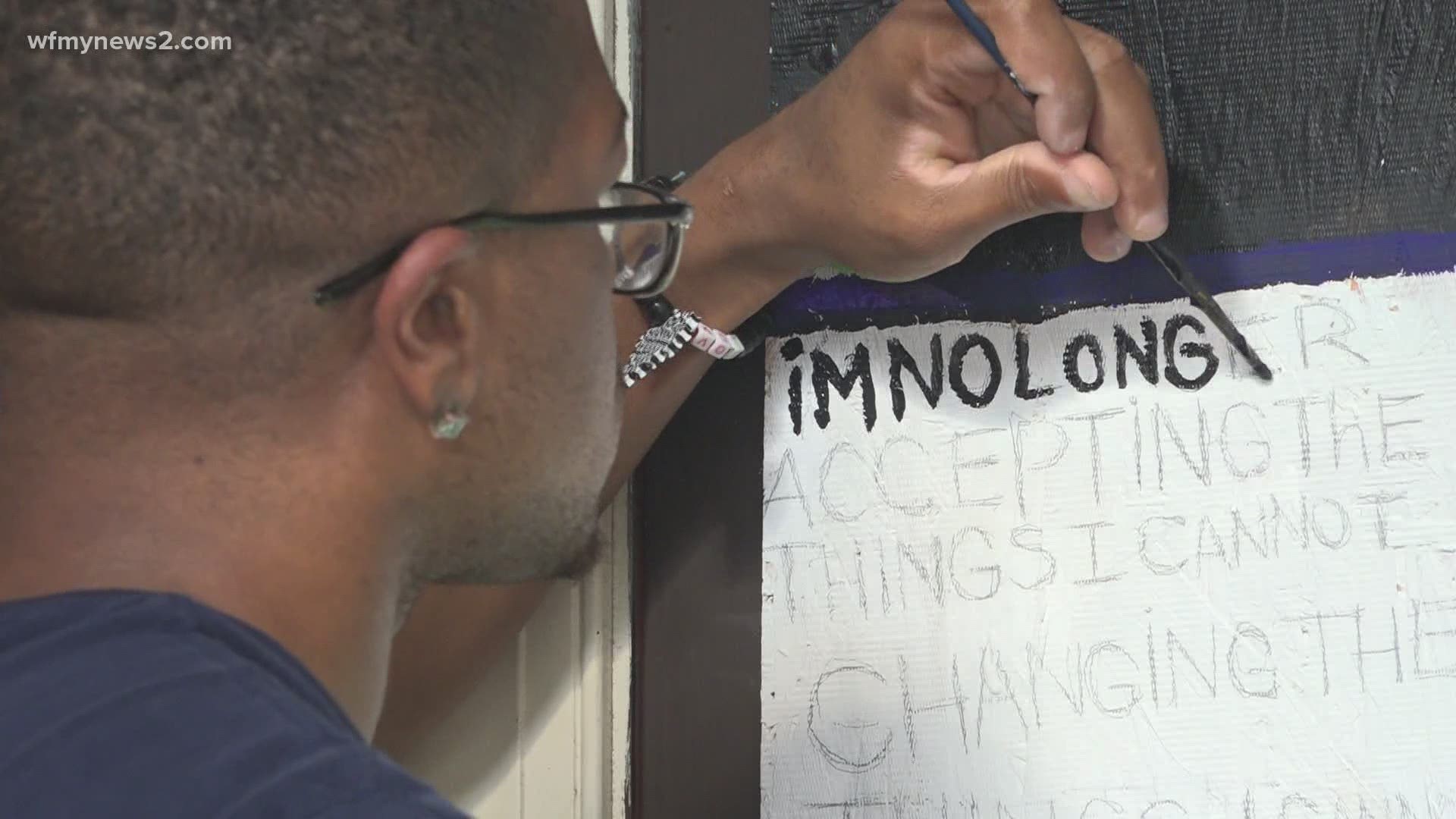 GREENSBORO, N.C. — The ongoing conversations about race relations in America have often been expressed with art. Several murals have appeared in public spaces with deliberate messages about racial and social injustice, following the protests of George Floyd's death. One artist who helped with Greensboro's new Black Lives Matter mural said he hopes to help kids relate.

As some businesses start to slowly remove board murals from their windows. Kenneth Amari Brown of Greensboro has been working on putting up his own message using cartoon characters.

He wants to connect kids to join the conversation about race relations and social justice.

"Boondocks is a very popular show that I like watching and everybody can relate to," said Brown who goes by the initials KAB on his artwork.

Brown has converted that love for cartoons and comic books to conversation-art pieces for kids who walk past the boarded-up windows of the restaurant, 1618 Downtown in Greensboro.

"I have it to where it's like pop-art, where everybody can see it and it's showing that we can all come together, and it's peaceful and kids can relate to the cartoons," said Brown describing the painting of a black and white hand engaged in a firm grip. The word 'power' explodes in the background in a colorful burst of red and yellow. The image is a play on the pictorial depiction of a packed 'pow' punch from a superhero seen in comic books.

Brown's mural is just one of several pieces of protest art that have now adorned Downtown Greensboro. The artworks started popping up in the days that followed protests over the murder of George Floyd by a police officer in Minneapolis.

Brown is one of several artists who were assigned to paint a Black Lives Matter Street Surface Mural in downtown. He was responsible for painting the letter 'M' in the mural which can be seen on South Elm Street, between February One Place and Washington Street.

"Everybody loves X-Men and this is Storm and this is Black Panther and I thought to include these two to see what they would do as superheroes in a movie and cartoons and how they would protest," continued Brown.

Several passers-by stopped to take pictures and talk to Brown about his artwork.

"Cartoons and comic books and all that have historically reflected periods in history. But I think it's really cool that that's happening right now and this artist is a part of that," Clay Bailey, who struck up a conversation with Brown said.

Brown's family also came to watch and encourage him as he worked on the words to accompany a cartooned version of civil rights activist Angela Davis most readily recognized for her signature super afro hairstyle. Brown's mom too was sporting a similar hairstyle.

"I'm so proud that he's a part of this movement and something is going to come from this, this time, so I'm very proud of him," Debra Ray said.

Brown who is currently a server at a local restaurant said he hopes to go into painting full time. While he volunteered his services to paint the mural, he wants to raise enough money from similar commissions to open a gallery in Greensboro or collaborate with one. He said painting brings him joy and he wants to keep spreading thought-provoking messages through his cartoon art.

L'Oreal to remove words like 'whitening' from skin products after protests, criticism