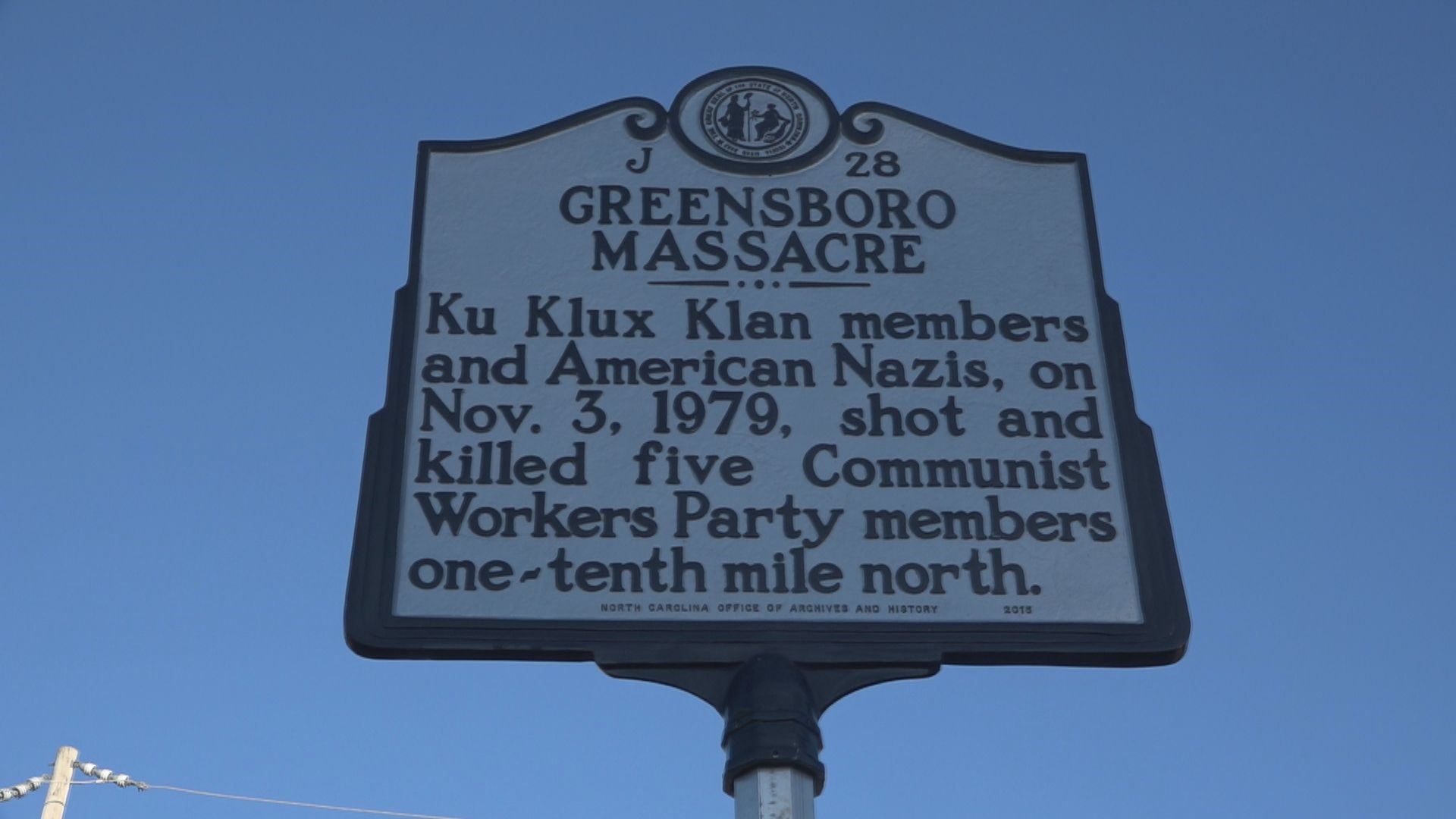 GREENSBORO, N.C. — Walk today between NC A&T and Bennett College through Morningside Heights, and there’s a sign of one of Greensboro history’s lows. All that’s left: a shiny marker of a dim 40-year-old past.

November 3, 1979, the Communist Workers Party held a "Death To The Klan Rally" in response to months of backlash for their efforts to organize textile workers.

“We can take our country back from the Communist Party. It’s time for us to ban together. If we have to get in the streets and fight with blood up to our knees, by God, it’s time to get ready to fight," one speaker at a klan rally said on the news before the Massacre.

Historians still don’t have a 100 percent clear picture of how the violence started, but take a look at the grainy footage for yourself.

This clip, filmed by a WFMY News 2 photographer, is perhaps the most intact record today of what happened.

Did you notice the lack of police presence? Greensboro leaders would say that the starting location of the rally changed, and that’s why it took a while for law enforcement to get there, but a 529 page report by an outside truth commission later declared “The single most important element that contributed to the violent outcome of the confrontation was the absence of police.” And that the city “deliberately misled the public about what happened.”

Officers finally showed up after the shootings. Five people died and 12 were injured from the gunfire. Eleven of them were members of the communist party and one was member of the Klan.

1 / 5
WFMY
William Sampson was a medical student and graduate of Harvard Divinity School.

Cesar Cauce, Michael Nathan, William Sampson, Sandy Smith and Jim Waller all laid dead or dying in the streets as police arrested protestors on both sides.

Pastor Nelson Johnson has spent the past 40 years spreading the story of what happened – even speaking about the shooting in front of the United Nations.

“A  Nazi tried to stab me," Nelson said. "He had a butcher knife and he was coming up under my midsection. I blocked it with my arm. The knife went through my arm, so I can’t raise this finger any further than that because the muscle is cut off.”

His wife, Joyce, was down the road when shots were fired. But she was on scene within minutes.

”It wasn’t just our friends that were killed, but a community was terrorized actually our whole city was under constant police surveillance," Joyce said. "You could hear helicopters up in the air. Going in and out of your home, you had to worry about whether you would get shot.

Immediately after, Greensboro leaders spoke out against those involved.

“This was an isolated, senseless, barbaric act of violence," a city leader says in archive video from November 3, 1979. "We are incensed about this and these people will be dealt with as expeditiously as we can possibly deal with them."

But despite video tape evidence, no one went to the prison for the shootings. No one was convicted.

Historians at the Greensboro History Museum also point out the shooting happened 19 years after Greensboro’s Sit In Movement which prompted integration of lunch counters.

RELATED: Memories of The Triad And The Sit-In Movement With Sandra Hughes

“It’s really hard to understand where that gap fell apart between those two things and that I think part of the real difficulty of still coming to terms with it from a historical perspective today," said historian Glenn Perkins. "It shows the success of the sit in were tremendous, but the problem the civil rights advocates were working against was so very very deep.”

So very deep that Joyce says the challenges are still there today with obvious comparisons to 1979.

Over the years they’ve tried to heal. Even saying Nelson met with a grand dragon of the klan.

“Never of it ever showed up in print, none of it was ever broadcasted. People wanted to freeze an image of us as eternal combatants with the klan and Nazis. That’s simply not true," he said.

He says he started by sharing with the klan what he regrets doing on that day.

“When the klan came in, there was a chant, death to the klan, I think that was unfortunate," Nelson said.

And he says they also tried to move forward.

“They expressed some shame, perhaps not to the fullest level. But you learn to receive people where they are," Joyce said.

So walk tomorrow between A&T and Bennett College and notice a little more than 20 words that sum up 40 years of hurt.