Jasmine Abhulimen was at the pool with her son when she was asked to provide ID, by former Pool chairman Adam Bloom, to gain access to the pool. She recorded the incident on her cellphone. 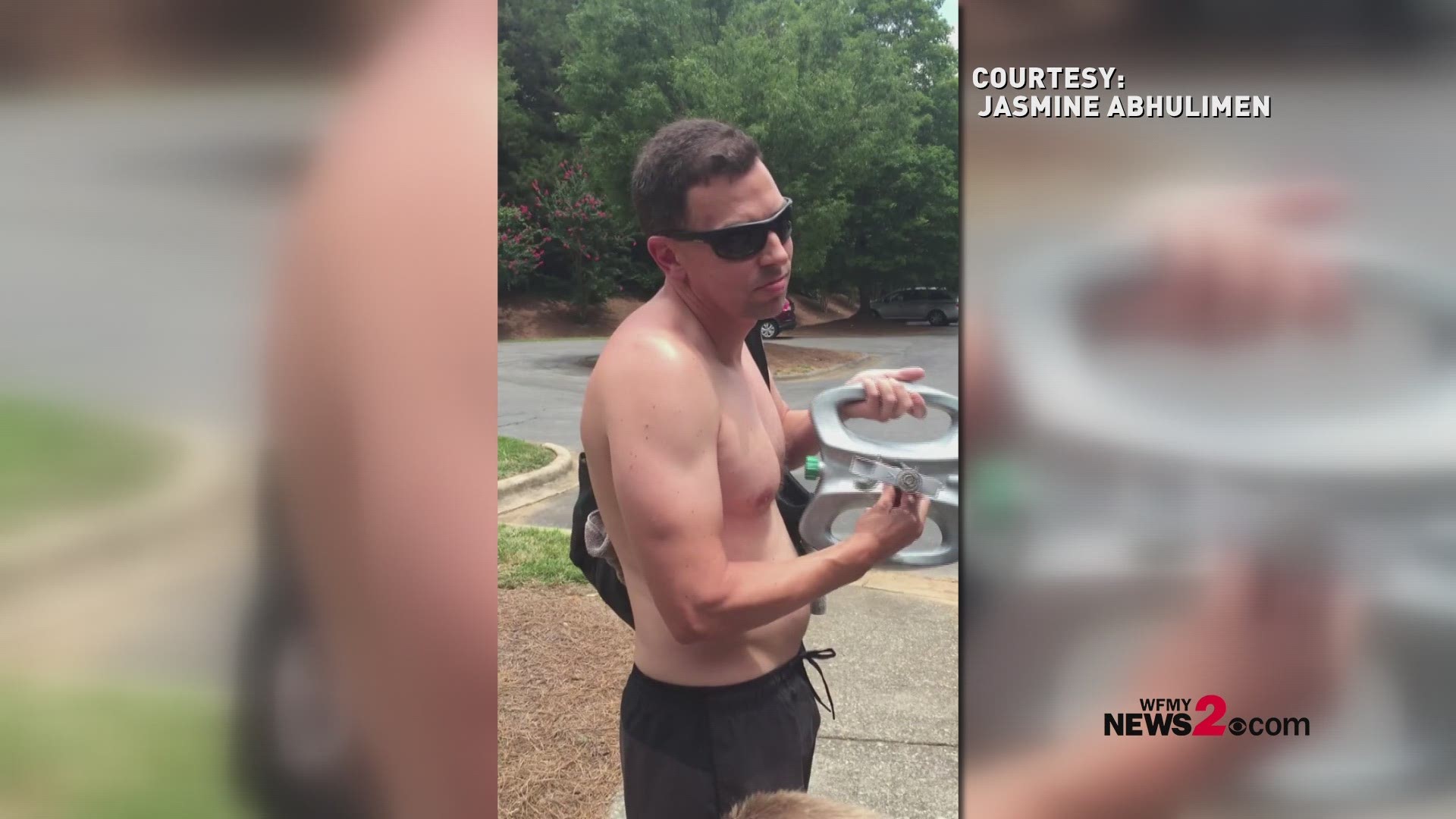 WINSTON-SALEM, N.C.-- A Winston-Salem Mom whose video went viral following a Fourth of July incident at her community pool has released a statement through her attorney.

Jasmine Abhulimen's attorney says Mrs. Abhulimen was at the pool with her son when she was asked to provide ID, by former Pool chairman Adam Bloom, to gain access to the pool. When she asked why she need to show ID, Bloom then called 911 and Winston-Salem responded. Officers defused the situation by showing him that her access card worked and they apologized for what had happened to her.

RELATED | Man Fired After Viral Video of Him Asking Black Mom, Who Had Access Card, For ID to Use Pool

The Abhulimen family’s paramount objective is to raise their children in a safe and inclusive environment. To that end, my client will engage in a private capacity with the Glenridge Homeowners Association to address this racial profiling incident and ultimately ensure that Glenridge is a community that reflects the values of a safe and inclusive environment. However, they do feel the need to clarify some misleading statements stated by Mr. Adam Bloom in his public comments.

It should be noted, that Mr. Adam Bloom immediately “resigned” as a Glenridge HOA Board member and as the HOA pool Director. The day following the incident, the Glenridge Homeowners Association issued a statement declaring that in the “coming days, we will take additional steps to ensure consistent and equitable application of our pool policies and procedures.” In addition to the statements from the Glenridge HOA following the incident, my client wish to also note the efforts of several of the Glenridge community members who witnessed this incident prior to Mr. Bloom calling the police. It should be noted that several residents that were present during the blatant and insensitive behavior of Mr. Bloom pleaded with him not to call the police. Upon noticing that Mr. Bloom had singled-out Mrs. Abhulimen for identification, they stepped up and informed Mr. Bloom that Mrs. Abhulimen was a member of the Glenridge community and offered comfort and support to Mrs. Abhulimen during and after the traumatic incident. To those members of the Glenridge community, the Abhulimen Family extends its sincere gratitude for their support during and after the incident and thank them all for truly being a neighbor.

Since being terminated from his employment, Mr. Adam Bloom has issued several misleading statements and interviews. Although he has declared some remorse and sorrow for the incident, there is a need for clarification.

Before the video recording started, Mrs. Abhulimen had been in the pool for a few hours with her son. She used her HOA - issued pool card to gain entry to the gated pool.

Mr. Bloom’s profiling and singling-out of Mrs. Abhulimen started from when he approached Mrs. Abhulimen and pointedly demanded for her to “verify her address”. Mrs Abhulimen provided her correct address in a polite and respectful manner. Mr. Bloom then went further and demanded an identification from my client. At this point, Mrs. Abhulimen, asked if ID was a requirement for usage of the community pool. She informed him that she had legal access with her pool pass. Mr. Bloom stated that he knew all the residents in the neighborhood (but did not know my client) and as such demanded that my client and her son leave the pool. He was resolute about his demand and threatened to call the police if my client did not comply to his demand.

Other members of the neighborhood that witnessed the encounter were appalled by the demand from Mr. Bloom and questioned why he was demanding identification from my client. Several Glenridge members approached Mr. Bloom and informed him that Mrs. Abhulimen did in fact reside in the Glenridge community and that he was making a mistake. Mr. Bloom ignored their pleas and proceeded to call 911 and informed the police that Mrs. Abhulimen was a “non-resident who refused to leave”. While waiting for the police to arrive, Mrs. Abhulimen was brought to tears.

Based on Mr. Bloom rude and demeaning attitude before and during the video recording, his repeated demand to see her ID when she was the only African American present, even after several community members confirmed Mrs. Abhulimen’s residence, his false claims to the 911 operator, and his refusal to issue an apology, can lead to only one conclusion – Mr. Bloom treated Mrs. Abhulimen rudely and unfairly due to her race and Mrs. Jasmine Abhulimen was racially profiled.

My client looks forward to working with the Glenridge HOA to build an even better community where everyone feels safe. However, they take exception with Mr. Bloom’s attempted apology and his dismissive attitude exhibited before, during, and after the video recording. The Abhulimen Family wishes that all types of racial profiling and unnecessarily calling the police on African Americans would immediately stop throughout the nation.

PREVIOUS STORY: The Winston-Salem Police Department (WSPD) confirms they received a 'disturbance' call on the Fourth of July around 1:21pm at the Glenridge Community Swimming Pool. The caller identified as Adam Bloom and said he was the Chairman of the Pool, according to the police report. The community pool is located on Tallison Drive.

Officers spoke with Bloom who said he was concerned that a woman identified as Jasmine Abhulimen using the pool without authorization to do so.

The responding officers determined, during their investigation, that Abhulimen did in fact have proper access via her pool access card. The officers said no crime was committed.

Jasmine Abhulimen recorded the incident on her cell phone and it has since gone viral and has receive national and international attention. She accused Bloom of racial profiling and said in the video that she was the only one asked to show ID.

The Homeowners Associated released this statement to WFMY News 2 about the incident:

The following statement was issued to the residents of Glenridge.

We sincerely regret that an incident occurred yesterday at our community pool that left neighbors feeling racially profiled. In confronting and calling the police on one of our neighbors, the pool chair escalated a situation in a way that does not reflect the inclusive values Glenridge seeks to uphold as a community.

Our HOA Board has accepted his resignation as pool chair and a board member, effective immediately.

We also have re-instituted a sign-in sheet at the pool to make sure no resident feels singled out again.

And, in the coming days, we will take additional steps to ensure consistent and equitable application of our pool policies and procedures. We apologize to our neighbors who were directly hurt by these actions, and we hope that everyone in Glenridge will join us in redoubling our efforts to care for and support all of our neighbors during this difficult time.

The company that Adam Bloom worked for, Sonoco Products, released a statement in new release and via Twitter the he was no longer an employee with the company.