North Carolina lawmakers are reacting to the Senate's vote to acquit President Trump. 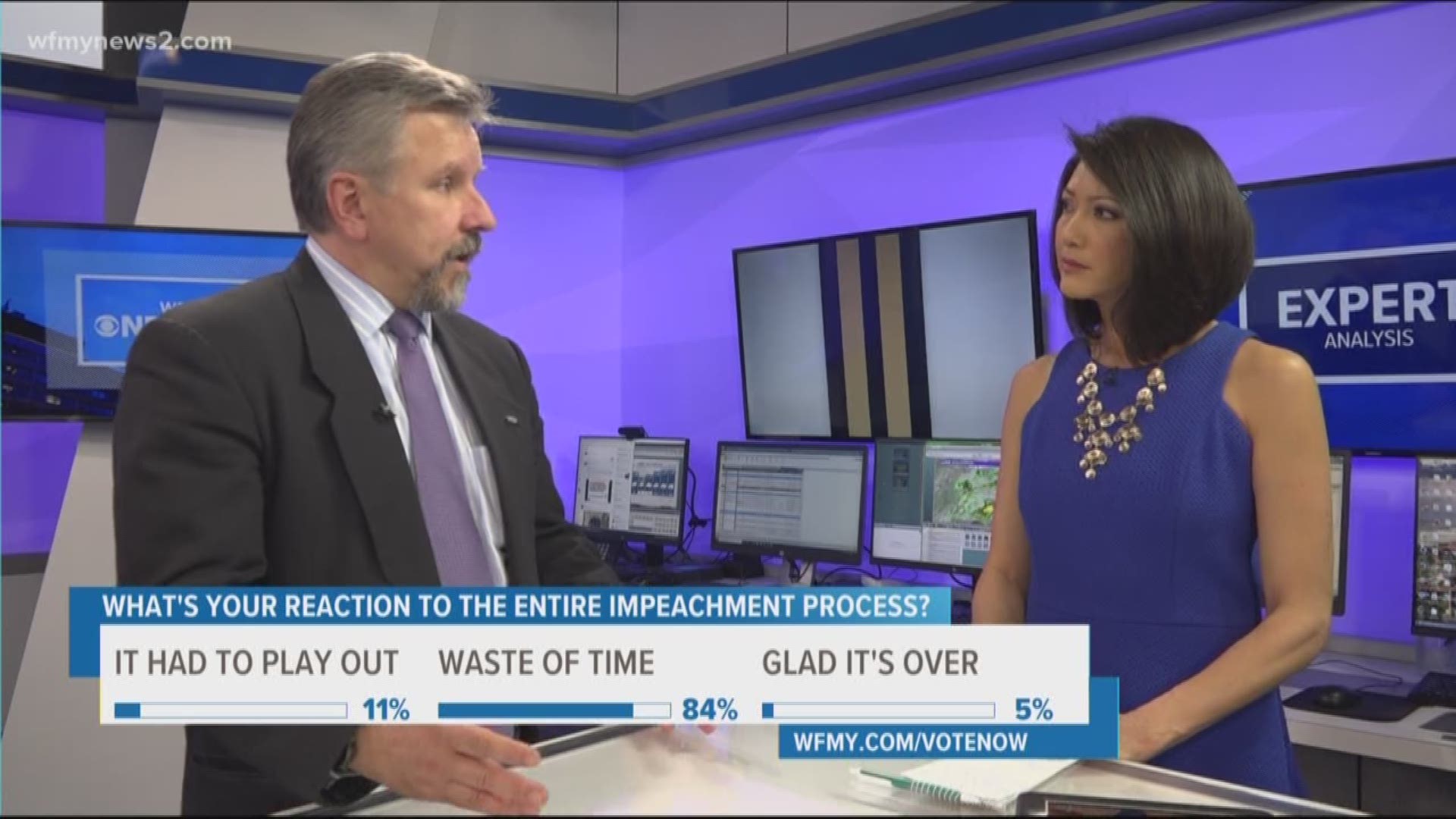 GREENSBORO, N.C. — President Donald Trump has been acquitted of all charges in the Senate impeachment trial. The move means President Trump will remain in office.

North Carolina lawmakers are reacting to the Senate's vote to acquit President Trump.

"This entire impeachment effort was motivated by partisan politics and a desire to remove the President from office instead of allowing the American people to decide his fate at the ballot box in November. Speaker Pelosi and House Democrats denied the President basic due process rights from the start and ultimately presented a weak case for removal that was rejected by the Senate. The President has been acquitted and we now need to move on. I’m committed to continuing my work to deliver more results for North Carolinians to keep our economy and military strong."

U.S. Rep. Ted Budd (NC-13) released the following statement after the Senate voted to acquit President Trump on both articles of impeachment:

“I’m glad that after the Senate conducted a fair trial, they decided not to short-circuit the 2020 election. The voters should choose whether or not President Trump remains in office, not politicians in Washington. Now we can finally put this sorry spectacle behind us and get back to work for the American people.”

Senator Richard Burr (R-NC) released the following statement on the Senate’s vote to acquit President Donald J. Trump on both articles of impeachment:

“In my 25 years representing North Carolina in Congress, I have cast thousands of votes, each with their own significance. I approached today’s vote with sober and deliberate consideration, conscious of my Constitutional responsibility to serve as an impartial juror. The Senate’s role is to determine whether the House has proven its case beyond a reasonable doubt, and whether, if true, these charges rise to the level of removing the President from office.

“The House had ample opportunity to pursue the answers to its inquiry in order to prove their case beyond a reasonable doubt. They chose not to do so. Instead, investigators followed an arbitrary, self-imposed timeline dictated by political, rather than substantive, concerns. When due process threatened to slow down the march forward, they took shortcuts.

“The Founding Fathers who crafted our modern impeachment mechanism predicted this moment, and warned against a solely partisan and politically-motivated process. They understood that an impeachment process rooted purely in disagreements about policy would subordinate the Executive to Congress, rather than delineating it as a co-equal branch of our federal government. Instead, they believed issues that do not meet the Constitutional threshold for impeachment should be navigated through our electoral process.

“To remove a U.S. President from office, for the first time in our history, on anything less than overwhelming evidence of ‘Treason, Bribery, or other high Crimes and Misdemeanors’ would effectively overturn the will of the American people. For these reasons, I voted to acquit the President on both articles of impeachment.”

"Given that the Congressional Democrats failed to either allege or prove that President Trump committed any crime, let alone a high crime or misdemeanor, we strongly believe that the United States Senate has done the right thing in voting to acquit the President and bring this impeachment episode to an end. On behalf of the entire North Carolina Republican Party, I would like to thank Representative Meadows, Senator Tillis, and our entire delegation for their support of the President throughout this sham impeachment process."

RELATED: Mitt Romney to vote to convict Trump, likely the only Republican to do so

RELATED: Nancy Pelosi rips up 'manifesto of mistruths' Trump speech after State of the Union

RELATED: President Trump delivers State of the Union on eve of impeachment verdict

RELATED: Pelosi shrugs off not getting handshake from Trump at State of the Union address