Election officials in the state's 100 counties are working through verifying results and counting thousands of absentee ballots that are still arriving by mail. 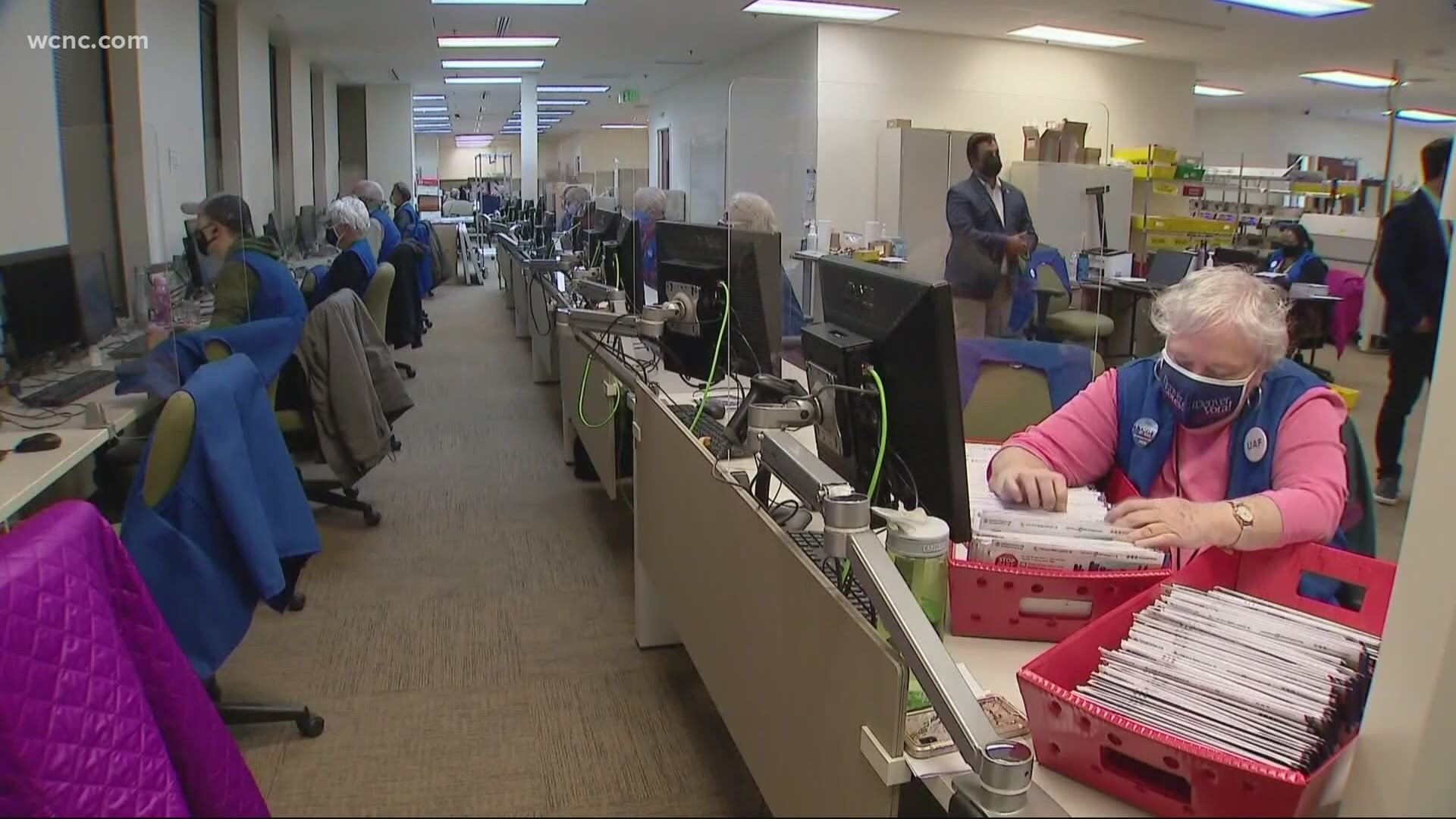 CHARLOTTE, N.C. — Election Day has come and gone with a record number of votes cast in Decision 2020 in North Carolina and across the country. 74% of registered voters in North Carolina cast a ballot in the 2020 General Election which is a record, according to state election officials. Still, winners in some key races, including the race for the White House, have yet to be declared in the state.

President Donald Trump declared victory in North Carolina early Wednesday morning, but with thousands of provisional and absentee ballots still left to count, the race is still too close to officially call. It will be more than a week before voters will know more about the final numbers of vote counts and race results.

In Mecklenburg County, election officials are expecting about 8,000 more mail-in ballots to arrive. On Wednesday, they received about 1,000.

“Remember all of those absentees that we mailed out may not be voted," Michael Dickerson said. "They may be like me who asked for an absentee by mail, but I went and voted early up at the Spectrum Center."

What's happening the day after the election in North Carolina?

Counties across the state are now beginning a process called the canvass period.  During that time election officials begin processing absentee ballots received after Election Day, researching provisional ballots to make sure they are valid, and conducting audits.  The process ensures the results are accurate.

During an update on Wednesday afternoon, State Board of Elections Executive Director Karen Brinson Bell said officials were able to count and process some 5.5 million ballots, including more than 900,000 cast on Election Day at polling locations throughout the state by 12:28 a.m. Wednesday morning.

The NCSBE is now is accepting mail-in ballots received by November 12, as long as they are postmarked by November 3.  Individual counties are now collecting and counting those ballots before turning the results over to the state.

“We ask to let the process happen just as it has in previous elections and with that, we will be able to ensure an accurate and fair election for North Carolinians and they can have confidence in the votes they cast,” Brinson Bell said.

While voters wait, counties are going through the typical, but tedious, audit processes, making sure all of the numbers add up and signatures match. There are more than 2,000 provisional ballots in Mecklenburg County to research.

The North Carolina State Board of Elections reported 117,000 outstanding absentee ballots Wednesday. It's still unclear how many of those ballots will be counted, as voters who requested a ballot also had the option to vote in person on Election Day instead.

About 1.36 million voters requested absentee by-mail ballots in North Carolina. Of those voters, election officials say more than 63% successfully returned a ballot before Election Day.  Another 17% of those voters decided to cast a ballot in person during the early voting period.

#NEW #THREAD: The results of mail-in ballots are crucial in the #2020Election especially when it comes to tight races such as the Presidential race and NC Senate. In NC, there are currently 117,000 outstanding absentee ballots. @wcnc

In Mecklenburg County, elections officials told WCNC Charlotte they were starting an audit to go through a list of those who voted at two precincts in the county. They are also working to tabulate thousands of absentee ballots that continue to arrive at the BOE each day.

As of Friday morning, there were 99,000 outstanding absentee ballots, according to the North Carolina State Board of Elections. New data showed the majority of those ballots still out there were requested in Wake and Mecklenburg counties. It's unknown how many of those ballots will be counted, as some may be canceled out by people who chose to voter in person on Election Day, or didn't vote at all.

Here’s a breakdown by party on outstanding absentee ballots.

Mecklenburg County election officials also have about 2,000 provisional ballots to go through. A provisional ballot is cast when a person's name does not appear on the poll book at a polling location.  Instead of turning a voter away, the voter is able to cast a provisional ballot that is later verified for eligibility and then counted.

“It’s so important to democracy that we have to take our time and we want to make sure we get it right,” said Mary Jo McGowan, a political science lecturer at UNC Charlotte.

In Gaston County, election officials said they received 1,800 mail-in ballots early Wednesday morning.  Those votes have not been counted and added to the county's total of 15,360 absentee ballots that have been returned and counted.

What's next in North Carolina?

Over the next several days, the county boards of elections will work to count the remaining ballots and verify the eligibility of provisional ballots cast on Election Day.  Officials will also conduct post-election audits. The audits ensure a fair and accurate count.

County boards of elections across the state will hold their canvass meeting at 11 a.m. on Friday, Nov. 13. During that time, election officials will release final results of absentee and provisional ballot counts.  A state canvass of the results will follow to ensure an accurate count.

If a recount is needed, it would be conducted by each county following the county canvass before the state canvass.  According to the North Carolina State Board of Elections, the vote difference must be 10,000 votes or fewer for a candidate who is the runner-up to demand a recount in a statewide contest.  For non-statewide contests, the difference between candidates must be one percent or less of the total votes cast.

A recount request must be made in writing by a candidate.  Candidates have until noon on Tuesday, Nov. 17 to request a recount in North Carolina.