SANTA CLARA, Calif. — Tevin Coleman scored three of his four touchdowns in the first half, rookie Nick Bosa had three sacks to go along with an acrobatic interception and the San Francisco 49ers remained unbeaten with a 51-13 victory over the Carolina Panthers on Sunday in their highest-scoring game in 26 years.

The Niners (7-0) are off to their best start since winning their first 10 games in 1990 but still faced questions because five of those first six victories came against teams that have losing records.

But San Francisco delivered perhaps its most complete performance of the season against the streaking Panthers (4-3), who had won four straight games and featured one of the league's top defenses.

Jimmy Garoppolo and the offense had little trouble carving Carolina's defense with 232 yards rushing and a pair of touchdown passes for San Francisco's most prolific offensive game since beating Detroit 55-17 on Dec. 19, 1993. The Niners stellar defense did the rest.

San Francisco intercepted three passes from Kyle Allen, who came into the game with no interceptions on 153 career attempts while winning his first five starts in place of injured starter Cam Newton. They also had seven sacks, with Bosa getting three of them to go along with his leaping interception and 46-yard return on the final play of the third quarter. 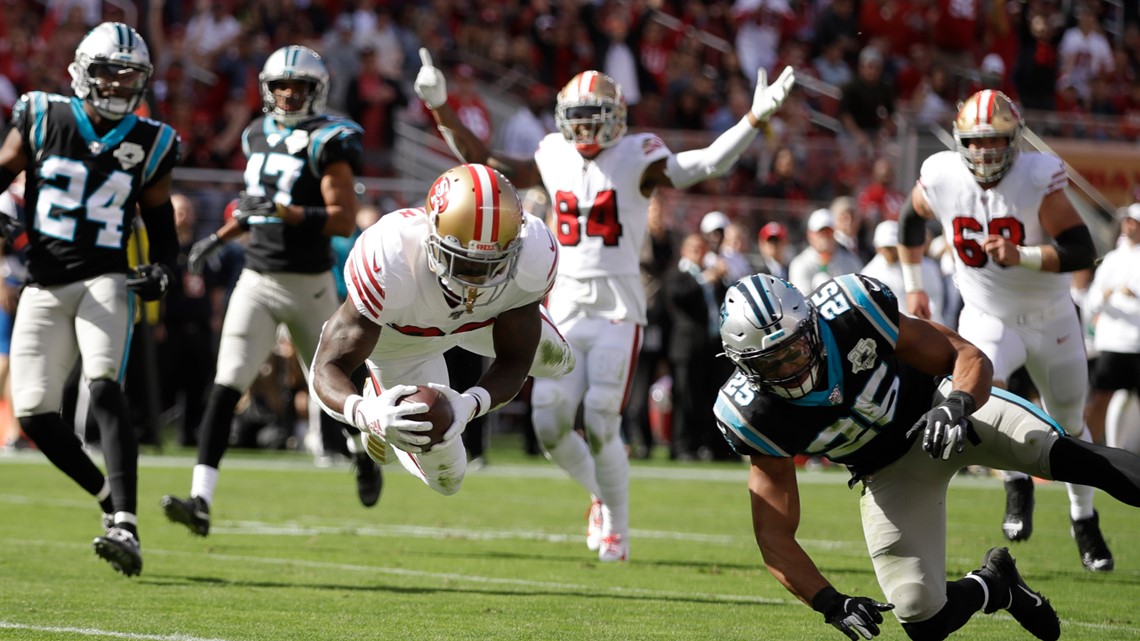 Coleman finished with 11 carries for 105 yards and two catches for 13 yards. He became just the fourth 49ers player to score at least four touchdowns in a regular-season game, joining Jerry Rice (1993, 1990) and Billy Kilmer (1961). Rice holds the team record with five TDs against Atlanta in 1990.

Receiver Deebo Samuel added a 20-yard touchdown run on a nifty inside handoff that tricked Carolina and Raheem Mostert scored on a 41-yard run that made it 51-13 in the fourth quarter.

Garoppolo finished 18 for 22 for 175 yards with TD passes to Coleman and Emmanuel Sanders.

Allen went 19 for 37 for 158 yards on a day that Newton was able to take warmups before the game in a sign that he could be close to being ready to return from a foot injury that has sidelined him since Week 2.

Christian McCaffrey was the lone bright spot on Carolina's offense with 117 yards rushing and a TD and 38 yards receiving.