Matthew Brown moved to High Point in 2002 working for the department for 18 years before his recent medical retirement. He died early this week. 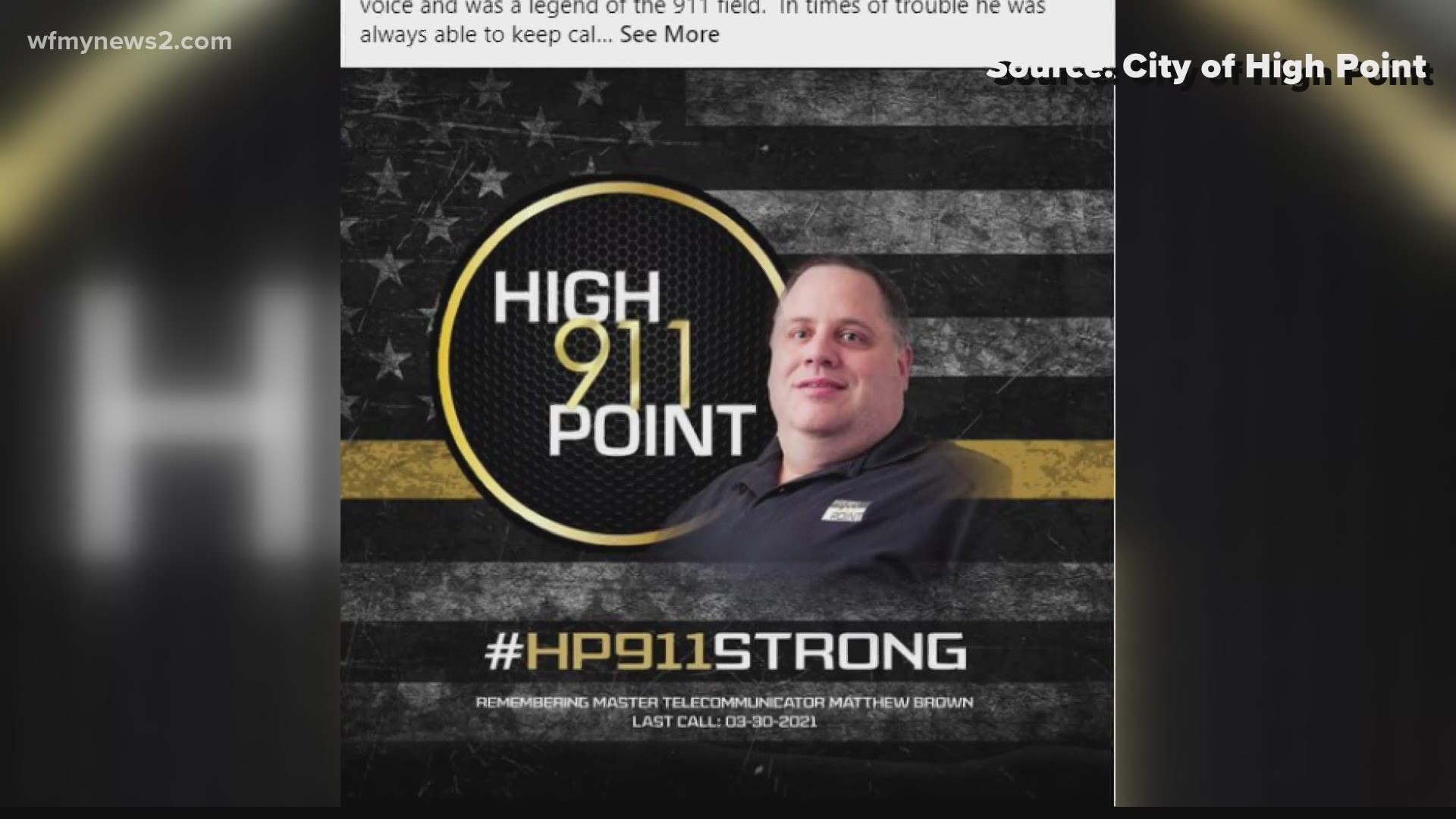 HIGH POINT, N.C. — Friends and co-workers of the retired High Point emergency dispatcher who died this week described him as a unique and true friend.

Matthew Brown moved to High Point in 2002 working for the department for 18 years before his recent medical retirement. Brown's family hasn't revealed how he died but a friend said he died at home. Those who knew him personally or worked with him spoke about the special bond they shared. They said he would be sorely missed but fondly remembered.

"Matt Brown was a very loving and caring person. He had such a beautiful soul," Brandon Mabe, a telecommunicator with High Point Emergency Services said.

"Matt just genuinely cared for everyone in his life and he would do anything. I don't think it has fully hit me. I haven't fully grasped it yet," Mabe said.

Brown and Mabe shared a special bond beyond being co-workers. Mabe rescued Brown when he suffered a stroke on the job in 2019.

"I am glad I was able to give him an extended lease on life to spend with his wife, his brother, and his family and friends. That is how I'm characterizing it at the moment," Mabe said.

"Jovial, educative, compassionate, calm. He was quirky and he would always try to find a way of doing something," said Jason Ciastko of South Bend, Indiana.

Ciastko is a childhood friend and grew up with Brown in Connecticut where he began his career as an EMT.

Brown first worked with Old Lyme EMS in Old Lyme, Connecticut while also serving with the Clinton Fire Department in Clinton. He later transitioned into dispatching at Valley Shore Emergency Communications where he fell in love with public safety communications.

Ciastko who also took the same career path as a first responder had to break the news of Brown's death to their mutual friends after he got the call from Brown's wife.

"On my side, it was the dread of having to call and let them know our good friend Matt, the one and only Matt, wasn't with us anymore physically. I had to find a way of gently letting them know that we lost Matt," Ciastko said.

Mabe said it would be hard to forget Brown because for many years he was overheard at work calming and comforting people through emergencies.

"I can hear his voice. He had such a baritone, yet sweet voice. It was just the perfect radio voice. The perfect voice period," Mabe said.

"High Point 911 was fortunate to have Matt, his outstanding radio voice, and unique linguistic capabilities grace the airwaves until he sought a medical retirement. Matt was known for his compassion for our citizens, his 911 family, and High Point Fire and Police Departments. Throughout his career as a Master Communicator, Brown assisted with numerous projects, including mentoring many of our telecommunicators who will mourn his passing. Matt had a desire to help as many people as possible and frequently performed beyond expectation while minimizing his contributions like those in the 2014 High Point Tornado. Matt's drive to excel was evident since his first day with High Point 911 and he earned the Telecommunicator of the Year Award in 2010. High Point 911 posted a memorial on the High Point 911 webpage and will continue honoring his career through an annual telecommunications award in his name each year."

Brown leaves behind a wife,  mother, a brother, his two Bull Mastiff 'fur-children' Hugo and Fiona, and a host of extended family members.