Homeowner worried as sinkhole creeps closer and closer to house

It started small but quickly grew in size and depth. The sinkhole was just a few feet from the property and close to a shed. 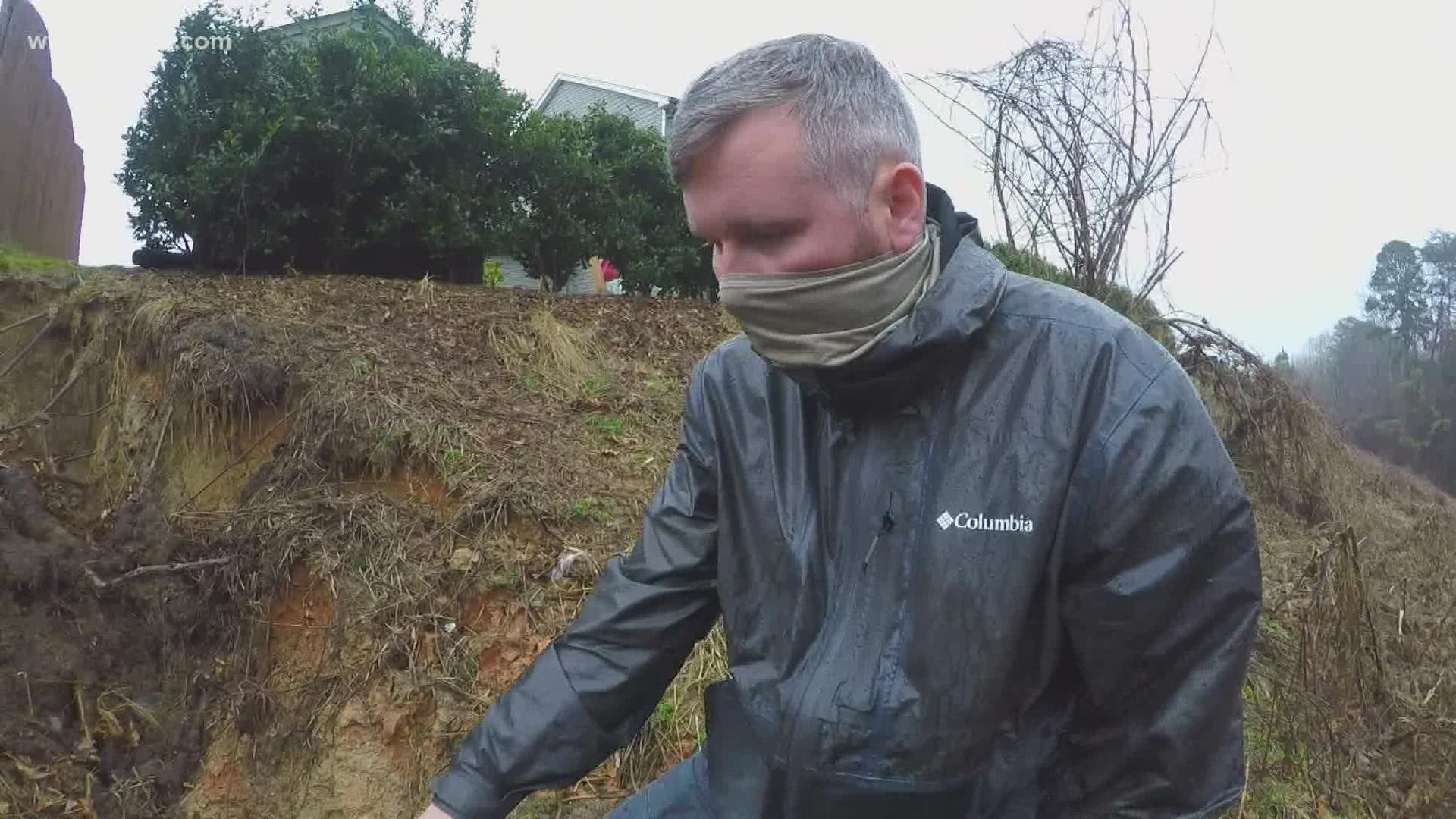 DAVIDSON COUNTY, N.C. — The house was perfect, the community was beautiful, and the neighbors were nice and friendly. It was turning into a perfect new beginning for Mike Brown and his family.

“Everything was great. We loved our neighbors and the neighborhood," Brown said.

The Davidson County house wasn’t new but was only a few years old. The family quickly became acclimated and was thrilled with the move.

The home backs up to a green belt and has a large slope that flows into a retention pond behind a row of trees. In the spring and summer, the hillside is covered with grass and vines that turn the slope a bright green.

This past winter - around January or February - Brown's wife went to the backyard and noticed a hole near their storage shed. The hole was a small sinkhole that appeared to open about 10 feet from their property on the slope behind the house.

“I had no idea what caused it, or what to do,” Brown said.

He reached out to the developer, the builder, and the county, to see what could be done. It took some time for people to get back in touch with him, and by this time, the sinkhole was growing and getting deeper.

Brown said the developer told him that because it had been about five years since they were involved in the project, it was no longer their responsibility. The builder also took no responsibility, leaving Brown to reach out to the county.

The issue was complicated. The sinkhole was right by a storm pipe that feeds water from the front of the neighborhood to that retention pond in the back, down past the hillside. Brown said he was told because the drainage pipe is there, he is not allowed to do any remediation work to fix the sinkhole.

A short time later, another sinkhole formed a few hundred feet down by his neighbor’s home. This sinkhole started to erode at the land where a steel fence separated the backyard from the slope.

“These holes were getting bigger and bigger every day,” Brown said.

The sinkhole by Brown’s house would eventually grow to be about 15 feet deep, 20 feet wide, and about 10 feet wide in some areas. It was also now about two to three feet from his storage shed.

“I was worried my house would be affected and my (storage shed) would fall in the hole,” Brown said.

Eventually, Brown reached out to us at News 2. We contacted the builder, the developer, and county and state officials. A representative from the Department of Environmental Quality investigated the matter, but because the property had switched hands, it was out of their jurisdiction.

A representative with Davidson County also did some investigating and sent us an aerial view along with a plot map that shows the land where the sinkhole formed on Brown’s property. Since the erosion is occurring on Brown’s property, the county determined it is his responsibility.

A couple of weeks later, we went out to see the sinkhole for ourselves. Brown said the hole just keeps getting bigger and bigger. While looking into the sinkhole, we noticed the hard plastic drainage pipe that carries water to the pond at the bottom of the hill. It appeared that rock or branches from trees or brush had damaged the pipe.

We reached out to the county and the developer again, alerting them that the pipe appeared to be damaged. It turns out, the sinkhole was the direct result of water gushing out of the damaged pipe underground.

At that point, the developer agreed to fix the pipe and fill in the sinkhole. Once the pipe was repaired, the hole was filled in and the slope regraded, and meshing was put down to help stabilize the soil.

The hillside is back to looking like it was when Brown moved in. Green vines and grass smother most of the hillside while providing an anchor to prevent the soil from sliding.

“Thank you so much. We could not have done it without you,” Brown said.

The next big test will be this coming winter when the grass and vines die off. Brown said he hopes the sinkhole doesn't open again on rainy days.