After a tour company cancels a trip three times, a Greensboro couple finally receives a refund

It was going to be a once-in-a-lifetime trip to Ireland. The trip scheduled for 2020 was canceled because of COVID. Two other bookings were also canceled. 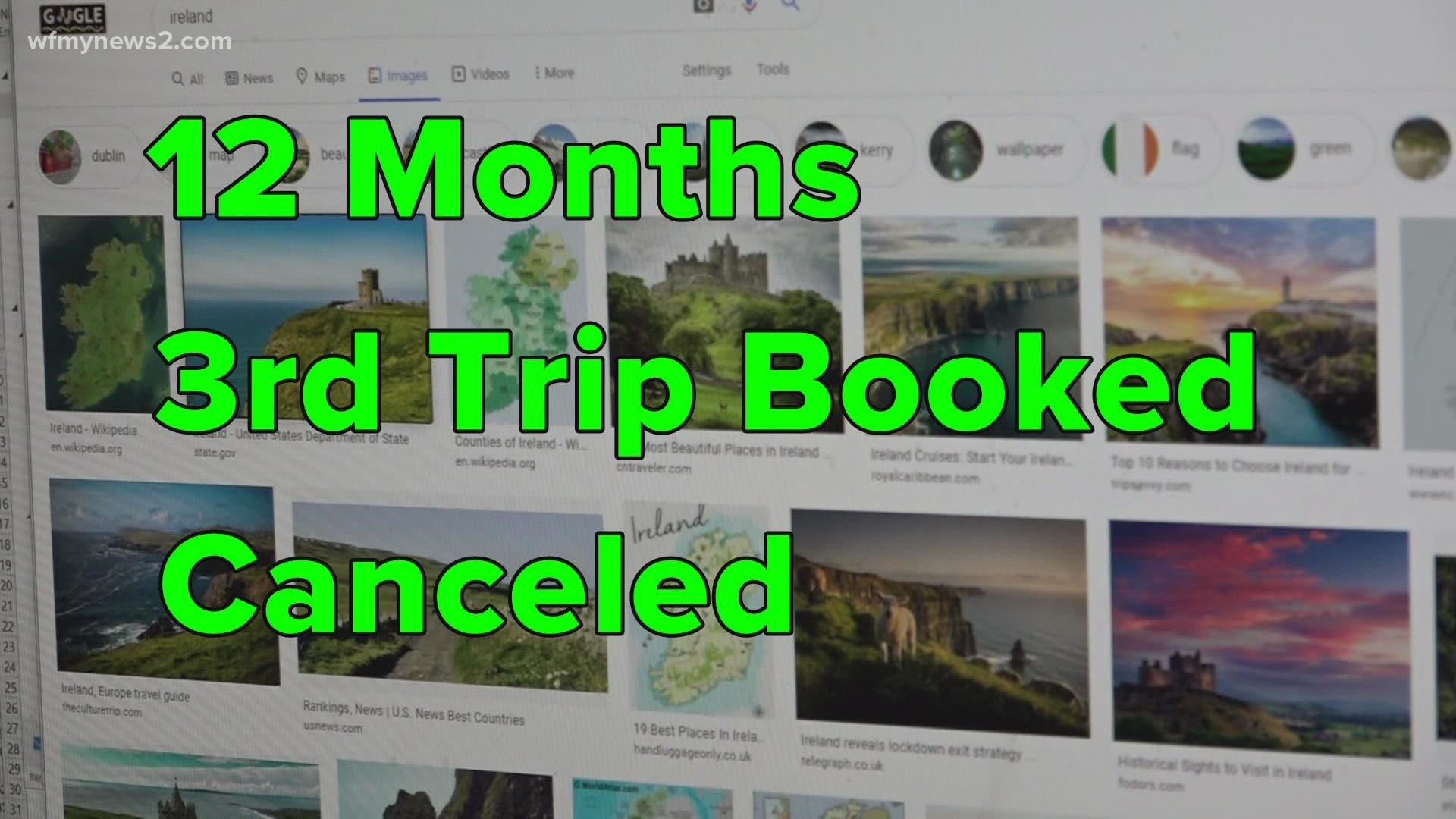 GREENSBORO, N.C. — Joseph Smith and his wife were starting to miss their daughter. Their oldest was studying abroad in Ireland for the semester. It was around January of 2020 that Smith decided to book a trip to go visit his daughter.

“We were excited about it, we were going to see her and had some other tours planned,” Smith said.

It was around February when reports of the coronavirus starting surfacing. Smith was a bit worried the trip for later that year wouldn’t happen.

“We asked the travel agent, and she didn’t think it was anything to worry about,” Smith said.

A couple of months later, the trip was canceled, and the Smiths could not visit their daughter. The Smiths were told they could rebook the trip later and all their travel funds would be applied. Several months later a second trip was booked even though the daughter they were planning to visit was already done with her studies.

“We rebooked the trip and planned to still enjoy the country, “Smith said.

Unfortunately, that trip was also canceled. Smith at that point asked if the travel agency could simply refund his money.

“We were told they would only do a trip credit and were not giving refunds,” Smith said.

He then reached out to the company he purchased travel insurance with and asked about a refund. The company sent him an email stating that his insurance policy did not cover a global pandemic that restricts travel.

Not exactly sure what else they could do the Smith’s booked the trip a third time and had hoped to travel in the Spring of this year. The trip, just like the previous two, was canceled by the tour operator.

“I tried complaining, calling, nothing, so I reached out (to News 2),” Smith said.

At this point, Smith felt he had tried to be accommodating but after three failed attempts he just wanted a refund so he could use the money on a trip that wouldn’t be canceled.

“I was frustrated, absolutely,” Smith said.

“Without reaching out (News 2) I would not be getting anything back,” Smith said.

The travel insurance company also sent the Smiths an email letting him know they would refund the cost of the policy. The total combined amount the Smiths were refunded was $5,500.

“I just want to say sincere thanks for intervening on our behalf, thank you,” Smith said.

The family has not yet decided how they’ll spend the money but there’s a good chance it will be on a trip somewhere.