'I miss her everyday': Husband gets needed repairs to mausoleum where wife is buried after calling 2 Wants To Know

The tile was buckling, the door didn't lock and water from heavy rains would often pour in. Curtis Mitchell says the worst part was the smell. 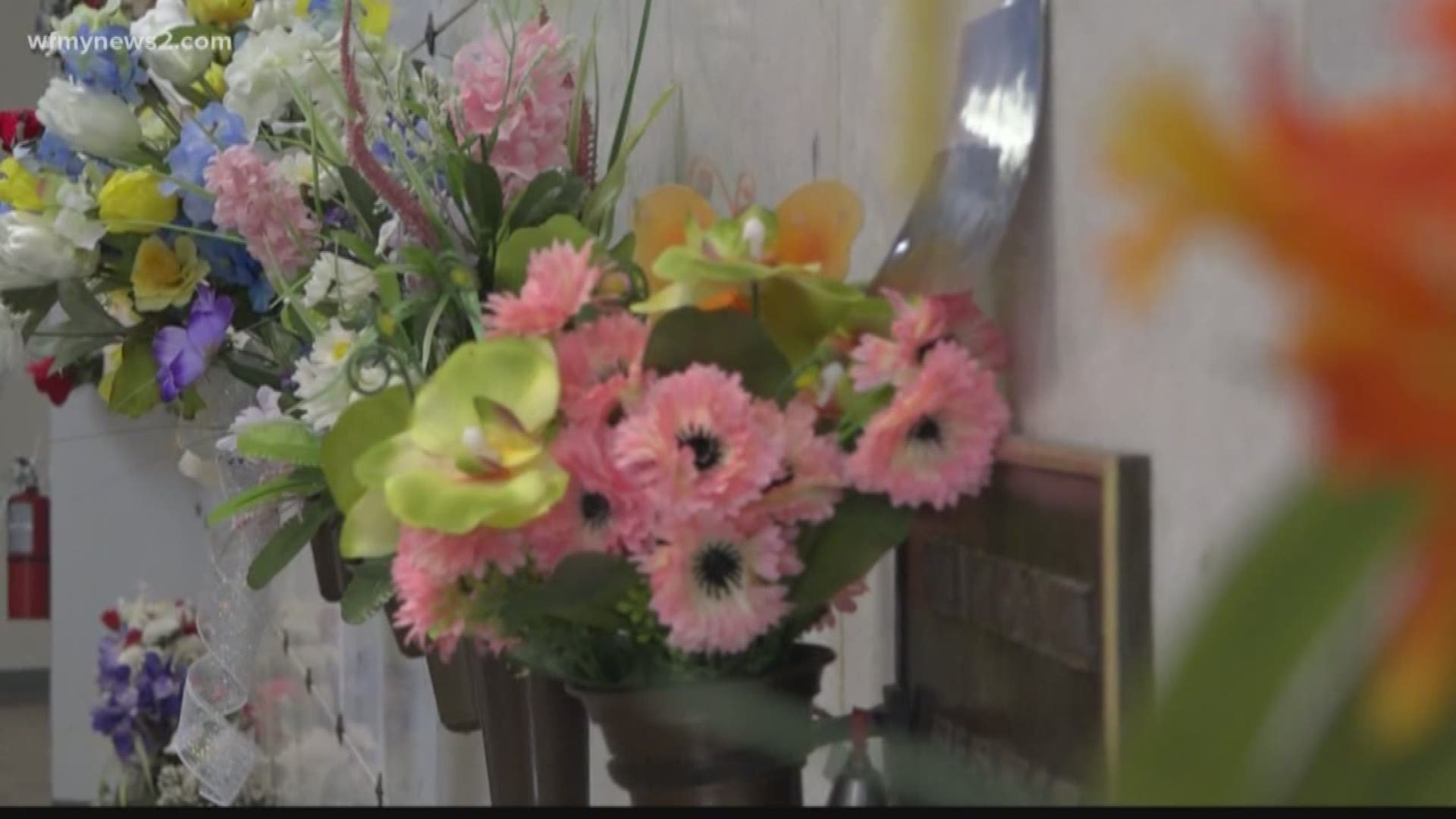 GREENSBORO, N.C. — Curtis and Deborah Mitchell met in high school and married when they were both 18. Almost 50 years later, Curtis still beams with love when talking about his wife, “Her smile is so amazing, I love it,” said Mitchell.

This December the couple would have celebrated their 50th wedding anniversary, “I miss her every day,” said Mitchell. 67-year-old Deborah became ill last year and she passed away on August 18th, which was just four days after her birthday.

The couple had purchased crypts in the mausoleum at Guilford Memorial Park several years prior. Mitchell also thought he’d be the first to die and has struggled with the passing of his true love, “I just miss her, I loved her so much,” said Mitchell.

Even though Deborah is no longer here Mitchell goes to visit her at the mausoleum three to four times a week. He spends about an hour there just thinking about her, talking and telling stories.

It would seem to be therapeutic for Mitchell, but it has turned into a practice of patience and frustration. The mausoleum has started to show some wear and tear from recent storms. Water has flooded the building on several occasions and the linoleum floor is starting to buckle, “It’s a disaster,” Mitchell said.

The concrete under the tile is crumbling in several places. One of the doors doesn’t shut and the mausoleum can be accessed at all hours when it's actually supposed to be locked at night.

Mitchell says the worst part of the issues is--the smell that permeates the building in the Summer months. “My daughter would walk in and then have to turn around and walk out it was so bad."

He reached out to the owner and complained but says he was always told to speak with the manager at the cemetery. Mitchell says he reached out to manager Ryan Bumgarner on several occasions, “He would always say give me 30 days, and then another 30 days and another,” said Mitchell.

After what Mitchell says was about 10 months and no improvements to the damaged floors or other needed repairs, he reached out to WFMY News 2, “I saw a thing on TV to call News 2 if you had a problem.”

WFMY's Call 4 Action volunteers worked with Mitchell and guided him through the process. Mitchell filed a formal complaint with the North Carolina Cemetery Commission. A notice was sent to the cemetery on August 13th alerting it to the complaint and requesting it respond within 20 days.

The cemetery met the deadline and informed the commission is was planning to make the necessary repairs and would have the work done by November 1st of this year. Mitchell's response, “I’ll believe it when I see it."

WFMY News 2 made several attempts to reach Bumgarner, but he never returned any of our calls. We left more than a half-a-dozen messages during about a 4-month period but never heard back. During that time, it did not appear any work was being done on the mausoleum.

Mitchell would continue to visit his wife, and while the smell was gone, the floor was still buckling in several spots and warning signs were put on the door and in certain spots to alert guests.

As October was winding down is was obvious the cemetery would not meet the deadline it imposed on itself. Mitchell snapping pictures of the floor and the door on October 30th, “It doesn’t seem like anything has been done,” said Mitchell.

When November rolled around, and the floor was still covered with buckling linoleum Mitchell sent a second complaint to the commission. We then reached out again as well to see why the work was not completed, “I have been told, they say in the next 30 days all the work will be done,” said President Bill Gaffney of the Cemetery Commission.

Gaffney said he talked with the Regional Vice President of Guilford Memorial Park. He said he was told the company spent more than $800,000 in repairs during the past 14 months. Also, Gaffney was told the cemetery installed a heating and air conditioning unit in the mausoleum which should help with moisture control and eliminate any issues with smell in the hot Summer months.

The second week in November Mitchell said while was visiting his wife he saw boxes and boxes of carpet squares in front of the mausoleum. A few days later, he said the linoleum tiles were ripped up, the cement inside was repaired and the carpet installed. “It looks so much better than it did,” Mitchell said.

2 Wants To Know Reporter Kevin Kennedy went to see the repairs and talk with Mitchell about everything that had gone on. When we drove into the cemetery we were quickly greeted by a man and a woman who told us we could not interview Mr. Mitchell on the property and asked us to leave. The gentleman also refused to answer any of Kevin's questions about why it took so long to repair the mausoleum instead he gave a phone number to call.

Kevin was able to speak with a media relations person representing Guilford Memorial Park and while she did not answer specific questions as to why this took so long, she did send us this statement,

“We are committed to providing all families with a well-maintained environment and take pride in offering beautiful property grounds for visitation and remembrance. As part of this commitment, Guilford Memorial Park has completed renovations to the mausoleum to improve the overall appearance and to alleviate concerns brought forth by our client families. We truly value their feedback and encourage anyone with concerns to contact us directly.”

As for Mitchell he plans to visit his wife often this holiday season and is thankful the repairs were finally made, “Thank you, thank you, to News 2."

His Bank Card Disappeared and He Canceled It. Someone Still Charged $900 On His 'Canceled' Card!

'He was Not Returning My Calls, Texts or Anything.' After Contractor Flakes WFMY News 2 Helps Homeowner Get Money