He made a dating app where he's the only guy allowed. He got a girlfriend!

Sorry, ladies. Aaron Smith of Greensboro is boo'd up. We scored video of the first date! 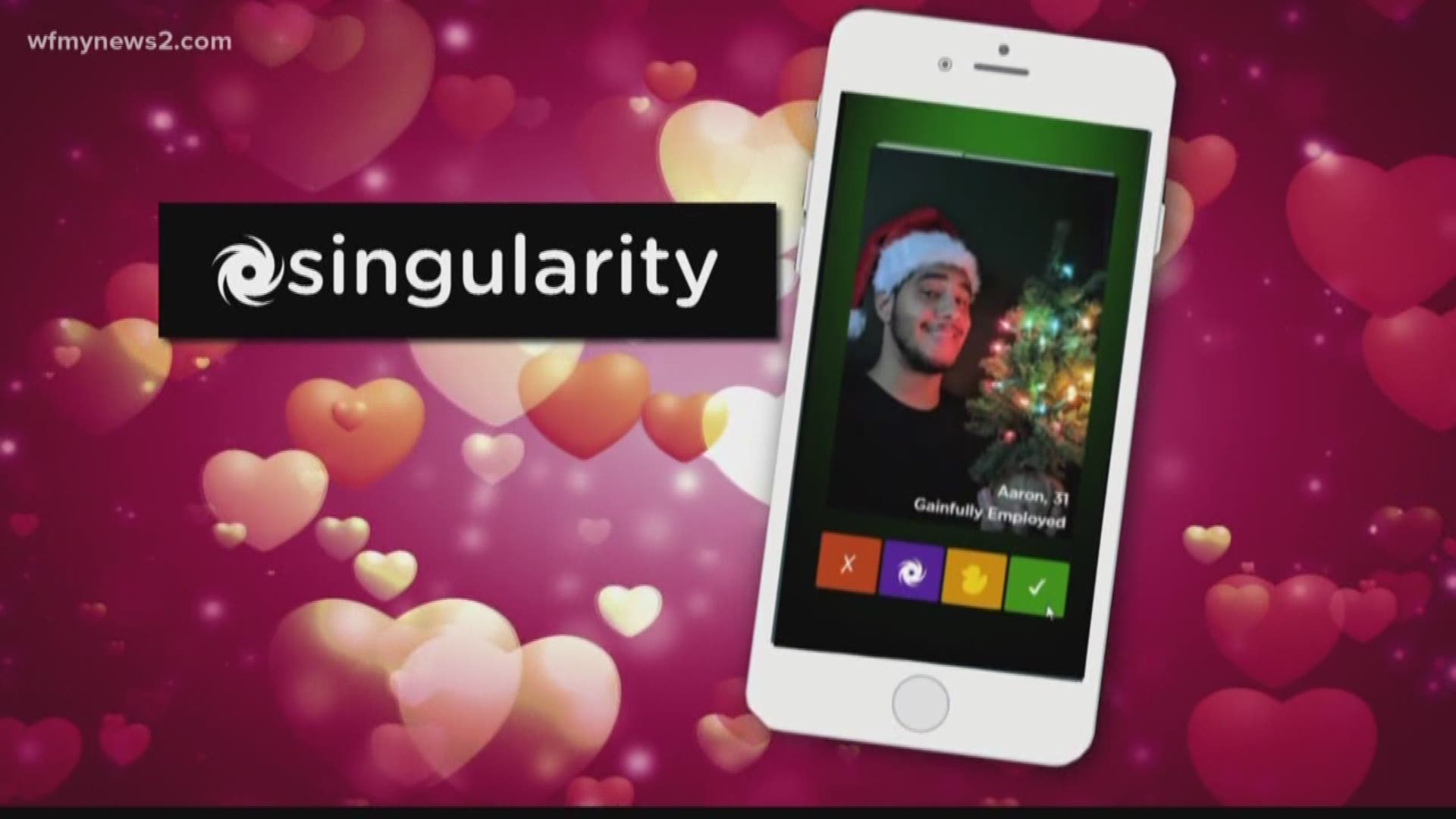 GREENSBORO, N.C. — In the hunt for love, there’s so much competition. That’s why a Greensboro guy built a dating app where he’s the only man allowed. Guess what?! He got a girlfriend. And they seem like a really good match.

A Hail Mary to one day hopefully getting married. Aaron created the app Singularity where he’s the only single man allowed on it. His best friend and computer programmer helped him build the app. Then the two created a Youtube commercial to get the word out. That's when WFMY News 2 picked up the story back in November.

Since we were the first to tell you about the app, coverage has exploded.

“I saw articles about it in Polish and Mandarin. Newsweek, People's website. There was a Youtube outlet that made a 3-D animation of me," Aaron said. "The response has been pretty crazy, but I kinda expected it because people are looking for a chuckle when everything is so doom and gloom nowadays."

“And messages from a lot of guys wanting me to build them an app," Aaron said.

Mixed in with all of that was an e-mail from Abi.

“Who is your future wife, you ask? Lucky for you, I’m an eccentric, socially anxious cat lady," she wrote.

Abi lives in Eugene, Oregon. That's 2,800 miles away from Aaron. The two video chat pretty much every day. She says his idea for a one-man dating app made her smile.

“People have to be creative. Online dating does suck," Abi said. "It was like something I would do. Also, he has good eyebrows. Very expressive.”

Credit: WFMY
Abi says Aaron's eyebrows are a big reason why she contacted him.

After a few weeks of getting to know each other, Aaron booked a flight to Oregon.

“What’s the worst that could happen? Murder?" Aaron wondered.

Credit: WFMY
Abi made this sign to pick Aaron up at the airport.

Abi met him at the airport with a sign reading: “The Aaron Smith of my dreams”

“She promptly shook my hand and then said fun fact, we’re holding hands. I thought that was adorable," Aaron said.

WATCH THEIR DATE IN THE MAIN VIDEO AT THE TOP OF THIS STORY!

Credit: Aaron Smith
The two picnic in the rain.

The two went on a picnic, but it rained, so they ate in the car. They tried Zumba for the first time, and talked about the important stuff.

“Where do you like to put the thermostat at?" Aaron asked on their date.

"Off. It’s cheaper. I just do jumping jacks to stay warm," Abi answered.

“We had a lot of fun. Neither one of us robbed each other," Abi said.

"No one died," Aaron added.

“It might have changed the trajectory of my life (shoulder shrug). So I mean that’s pretty cool,” Aaron said.

The date must have struck a chord with Abi too. She wrote him a song.

"The first time I saw your eyebrows on your face, I knew you were the one," her lyrics said. "And if your eyebrows ever get burnt off in a horrible accident then we’re through. But until then, I’m with you.”

An old-fashioned love story set to a modern tune.

EDITOR'S NOTE: We asked what’s next for the couple, Abi says there are going to have a destination wedding in Kansas halfway between their two homes. It was a joke, or at least we think it was. Kinda hard to tell with these two, which makes them such a great pair.

Ben Briscoe
Ben Briscoe. 2,921 likes · 237 talking about this. Weekend anchor/investigative reporter in North Carolina for WFMY News 2. Murrow winner and always on the hunt for a story which could make a difference.

RELATED: 3 dating apps removed from stores after kids under 13 accessed them