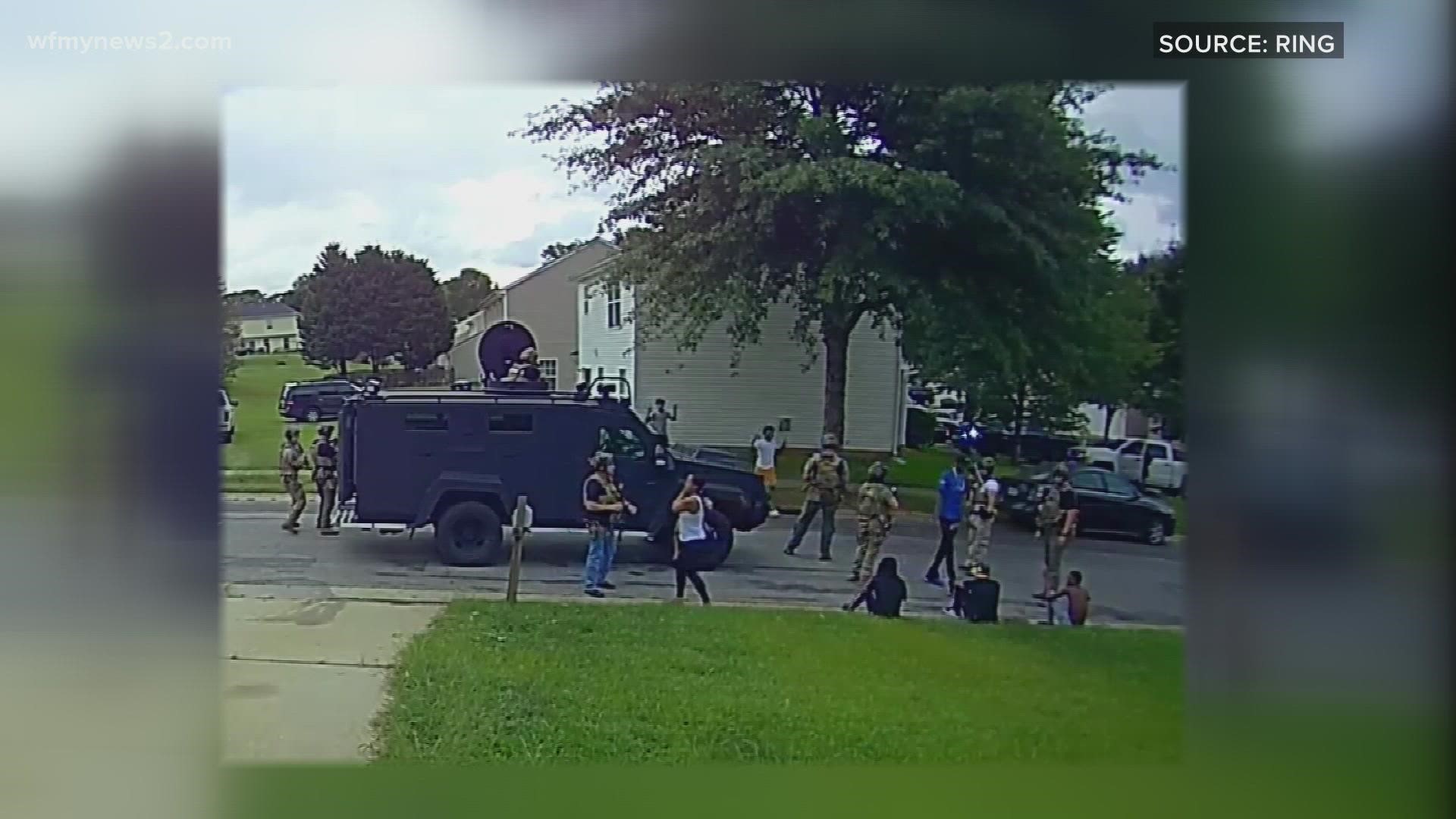 WINSTON-SALEM, N.C. — A Mount Tabor High School student is dead after a shooting inside the school and another student is behind bars, accused of pulling the trigger.

Investigators said a school resource officer called in the shooting around noon on Wednesday. The school immediately went into lockdown and police secured the area.

The victim, 15-year-old William Chavis Reynard Miller Jr., was taken to Baptist Medical Center but died from his injuries. No other students were shot.

“He was a great kid. And very much loved by his parents and teachers that interacted with him," WS/FCS Superintendent Tricia McManus said about Miller, Jr.

Investigators went on an hours-long search for the suspect, who they said is also a student at Mount Tabor. The accused gunman was eventually taken into custody without incident Wednesday evening.

Police said the suspect is a juvenile and that's why his identity hasn't been revealed at this time. Police also haven't said what charges he is or could be facing.

Though they were adamant that no details of the investigation could be shared, they all spoke about school safety, the need for more mental health services in schools, and the need for more after-school programs.

"We need more opportunities for kids after school, more volunteers so children have options after school is over," O'Neill said. "If a child enters a gang in sixth or seventh grade, we’ve lost them."

When asked directly, O'Neill would not say if the shooting was gang-related, citing the ongoing investigation.

WFMY News 2 obtained Ring doorbell video showing heavily-armed officers making an arrest near Kernersville Wednesday night. We asked O'Neill if that arrest was related to the search for the juvenile suspect. He declined to answer, citing the ongoing investigation.

The lockdown at the school lasted for several hours while parents waited to be reunited with their kids.

Parents gathered in the parking lot at the Harris Teeter on North Peace Haven Road. From there, police instructed them to go to an undisclosed location to pick up their children.

While parents were waiting at Harris Teeter, investigators said a 'disturbance' happened near the store. Officers swarmed toward the back of the store with guns drawn. Authorities first reported shots were fired after a sighting of the suspect. They later said there was no shooting - only a disturbance in the area. It's still unclear what exactly that disturbance was.

1 / 7
WFMY News 2
Disturbance at Harris Teeter as parents were waiting to pick up their children following a shooting at Mount Tabor High School.

Parents, like Holly Whittington, were relieved when they were able to make contact with their kids. She has a daughter who goes to the school.

"[My daughter] said police came in with dogs and made them all stick their hands in the air, and they all huddled in the dark in the corner because they didn't know where the shooter was," Whittington said.

Police said several nearby schools were placed on lockdown out of an abundance of caution, but no incidents were reported at any other schools.

The dismissal process at several surrounding schools took a bit longer as some schools offered their buses to help with assisting the situation at Mount Tabor High School.

This is the second shooting at a school in North Carolina within the same week. Gov. Roy Cooper shared a message on Twitter, saying the Department of Public Safety is ready to provide support in the Mount Tabor investigation as needed.

Mount Tabor High School closed Thursday and Friday to give students, parents, and staff time to process the tragic event.

“Today was a traumatic day for Winston-Salem/Forsyth County Schools, and one that will not soon be forgotten,” the school district wrote in a news release.

WS/FCS Superintendent Tricia McManus extended her sympathy and prayers to Miller’s family, and to all students, staff, and parents at Mount Tabor.

“I want to thank parents across the district for their patience and understanding during our preventative lockdowns, which were done out of an abundance of caution and to assist our law enforcement partners with their investigation,” McManus said. “I know how awful it must have been to be separated from your children during this incident, and I am sure that you held your children tighter when they arrived home this afternoon.”

She said parents, students, and staff had to endure the “unthinkable.”

“Please know the entire district is with you,” McManus said.

VIDEO: 'This is a sad day in Forsyth County,' Sheriff Kimbrough talks about shooting at Mount Tabor High 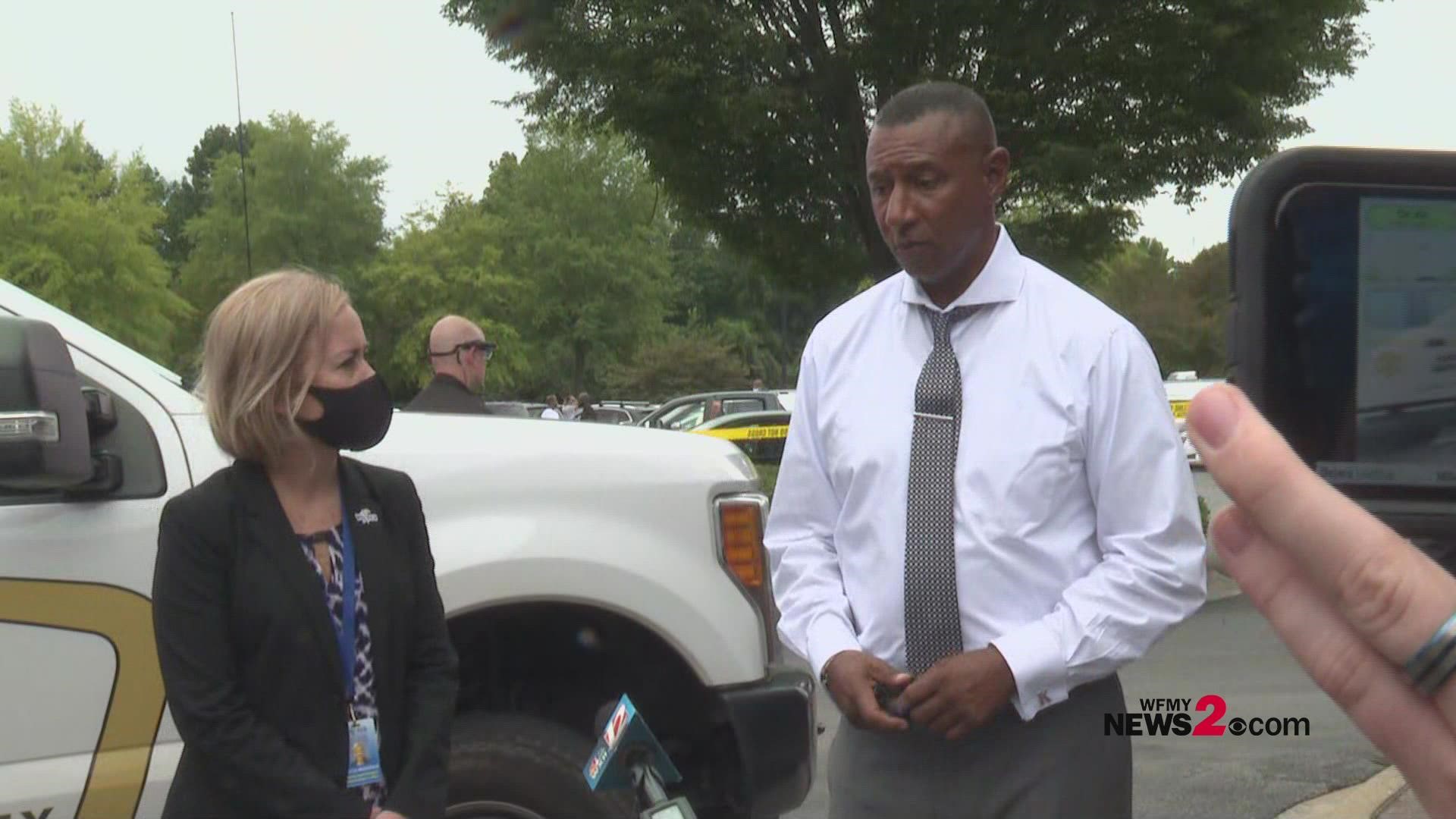 VIDEO: 'No, it can’t happen to us.' Shaken Mount Tabor High mom talks about the moments she learned there was a shooting at her child’s school 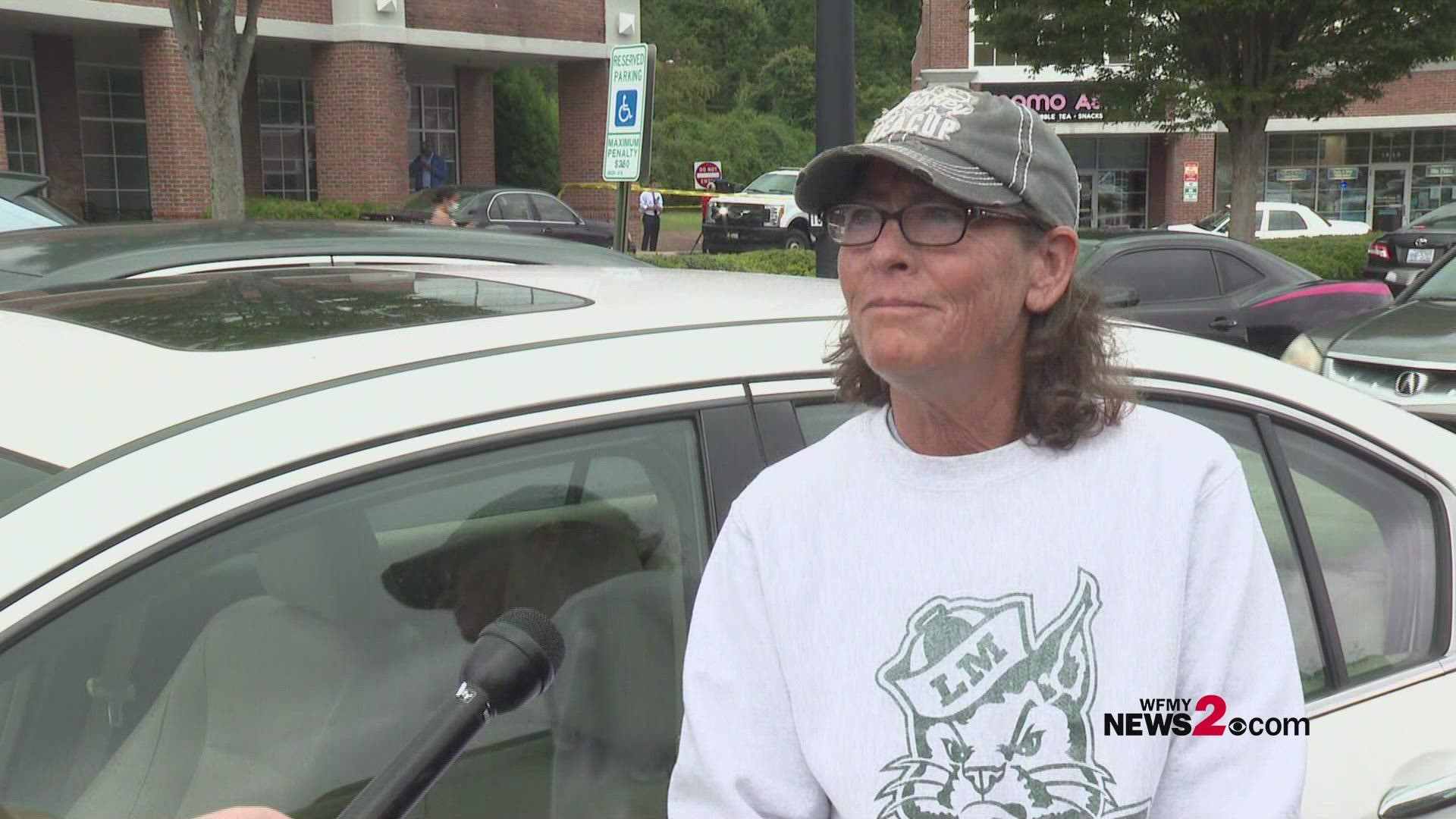 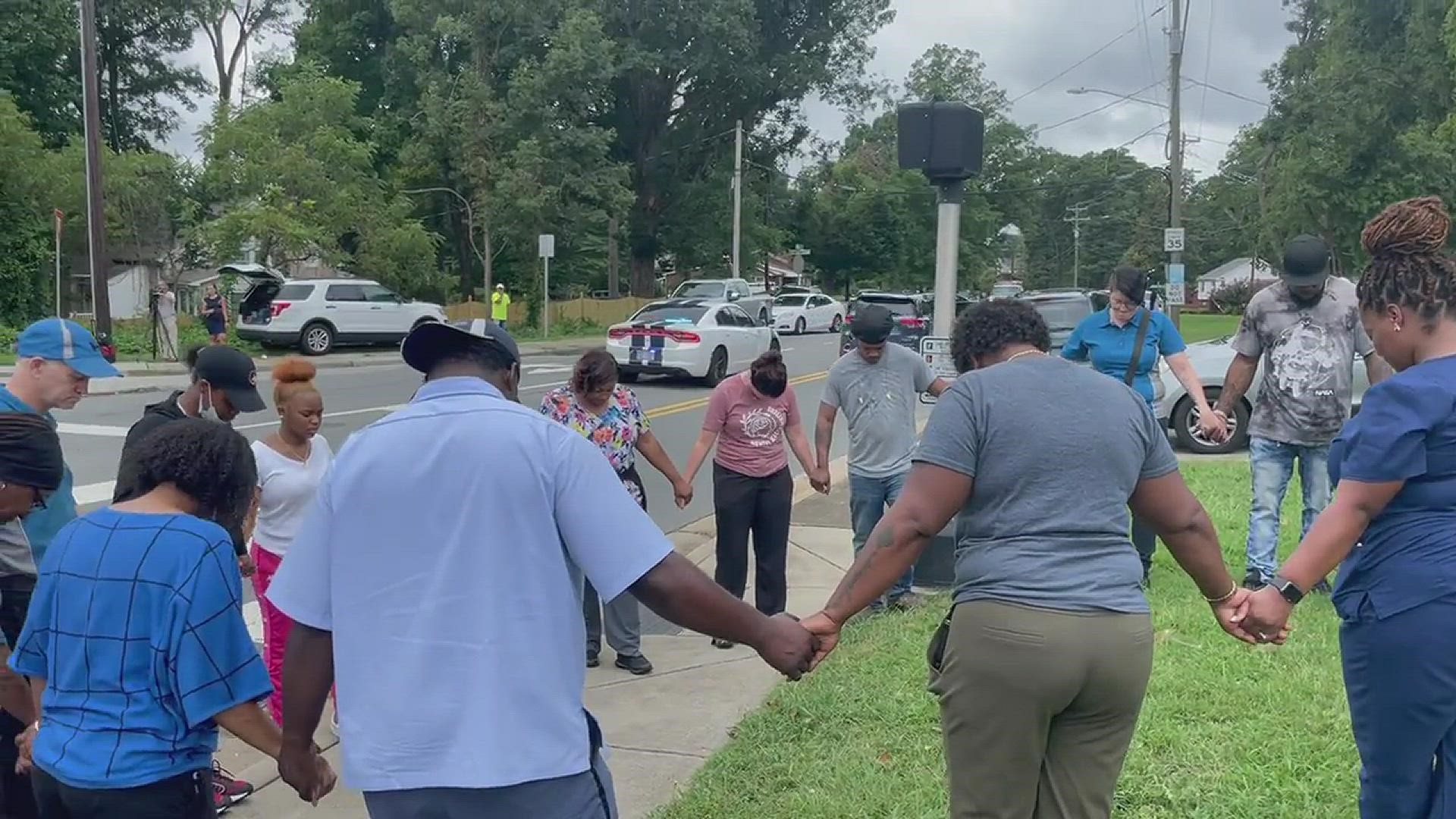 RAW: One injured in shooting at Mount Tabor High School 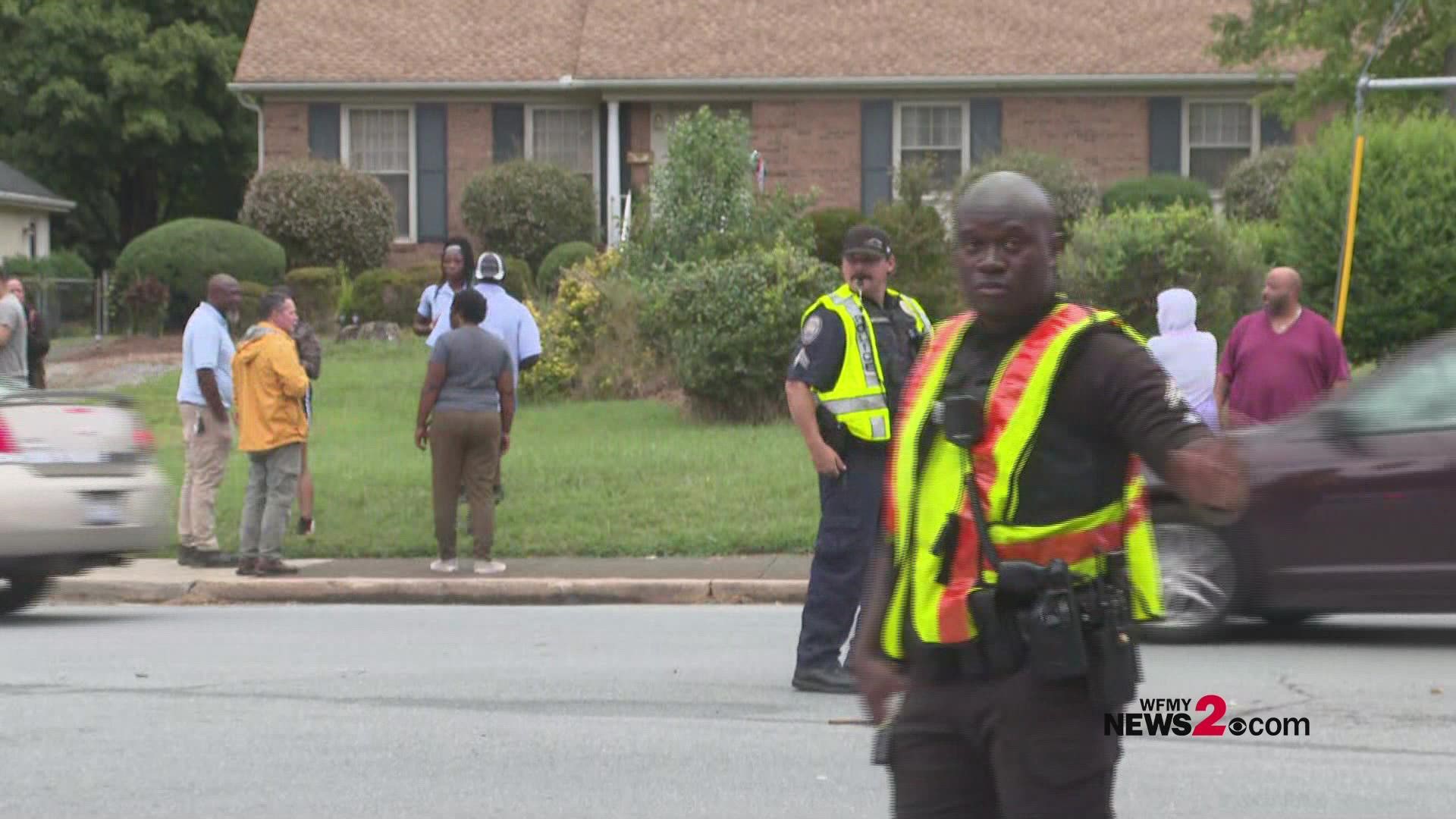 New details about the Mount Tabor incident:
5. One student is injured, all other students are safe.
6. We are actively seeking the suspect. We have no confirmed information of any other shootings or injuries.

Here at the Harris Teeter on Peace Haven Rd in ⁦@CityofWS⁩ where parents are anxiously awaiting the arrival of their students after a shooting at Mt Tabor High School ⁦@WFMY⁩ pic.twitter.com/YciMFfDc4D

Parents and neighbors formed a prayer circle to pray for students and teachers after a shooting at Mt. Tabor High School @WFMY pic.twitter.com/cbcJwyb2F9

If you have photos or videos from the scene you'd like to share, please text them to 336-379-5775. Please include your name and where you were.

Mount Tabor High School is on lockdown. There has been a shooting on school property. We and the WSPD have secured the campus and are doing everything possible to keep students safe. We are actively investigating what happened and will share confirmed information when available. 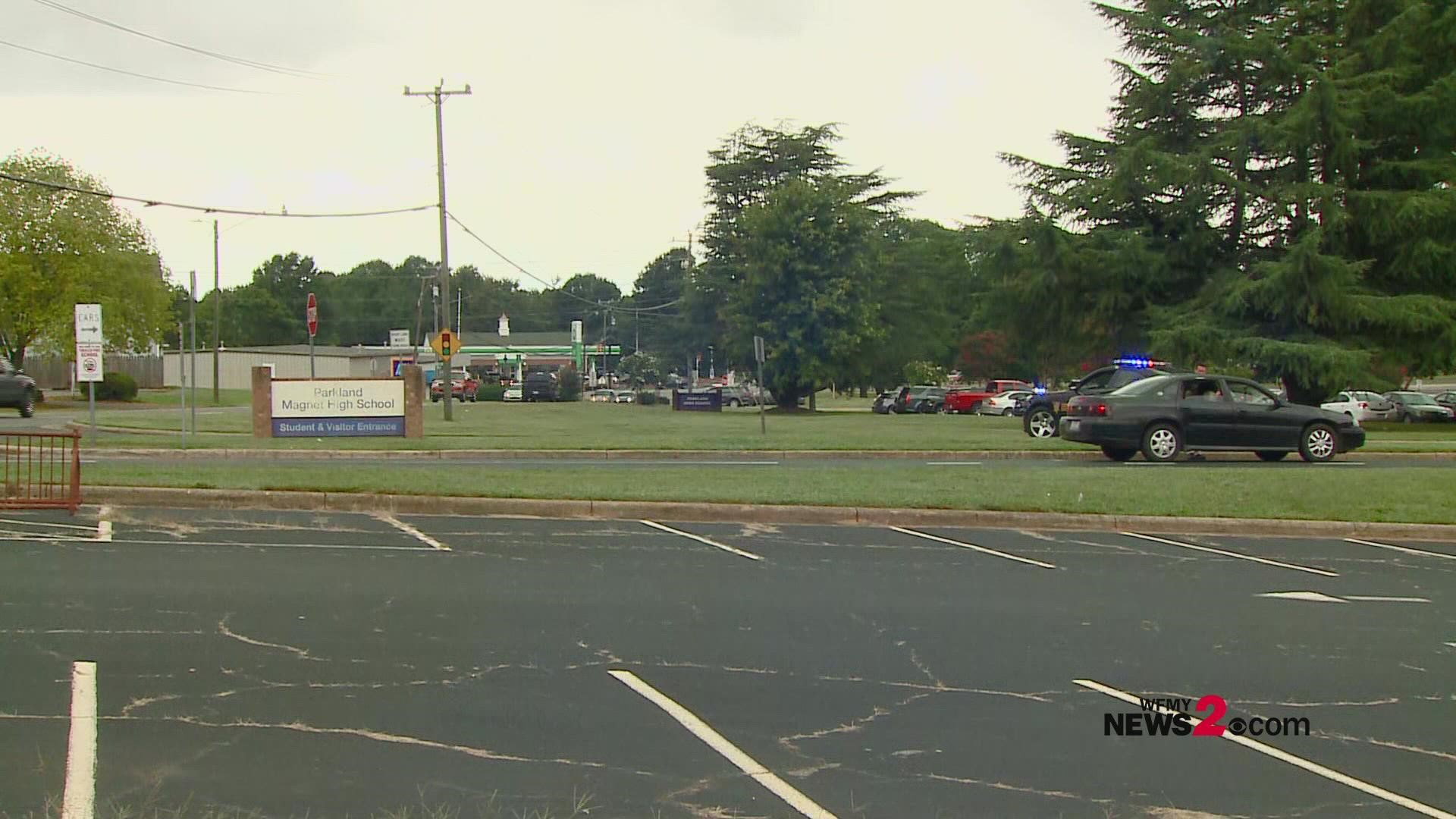 The husband of a staff member says he got a text from his wife on the Mt. Tabor HS campus. @WFMY #2WTK #schoolshooting #mttabor pic.twitter.com/yzQR3xTyj8

Speas is on a Community Lockdown for an incident at Mt Tabor High School. We are safe and all clear. Again, students are safe. We will dismiss as normal at 2:25. pic.twitter.com/E1zCy3tqhz