The Piedmont Triad was impacted by flooding from tropical rains. 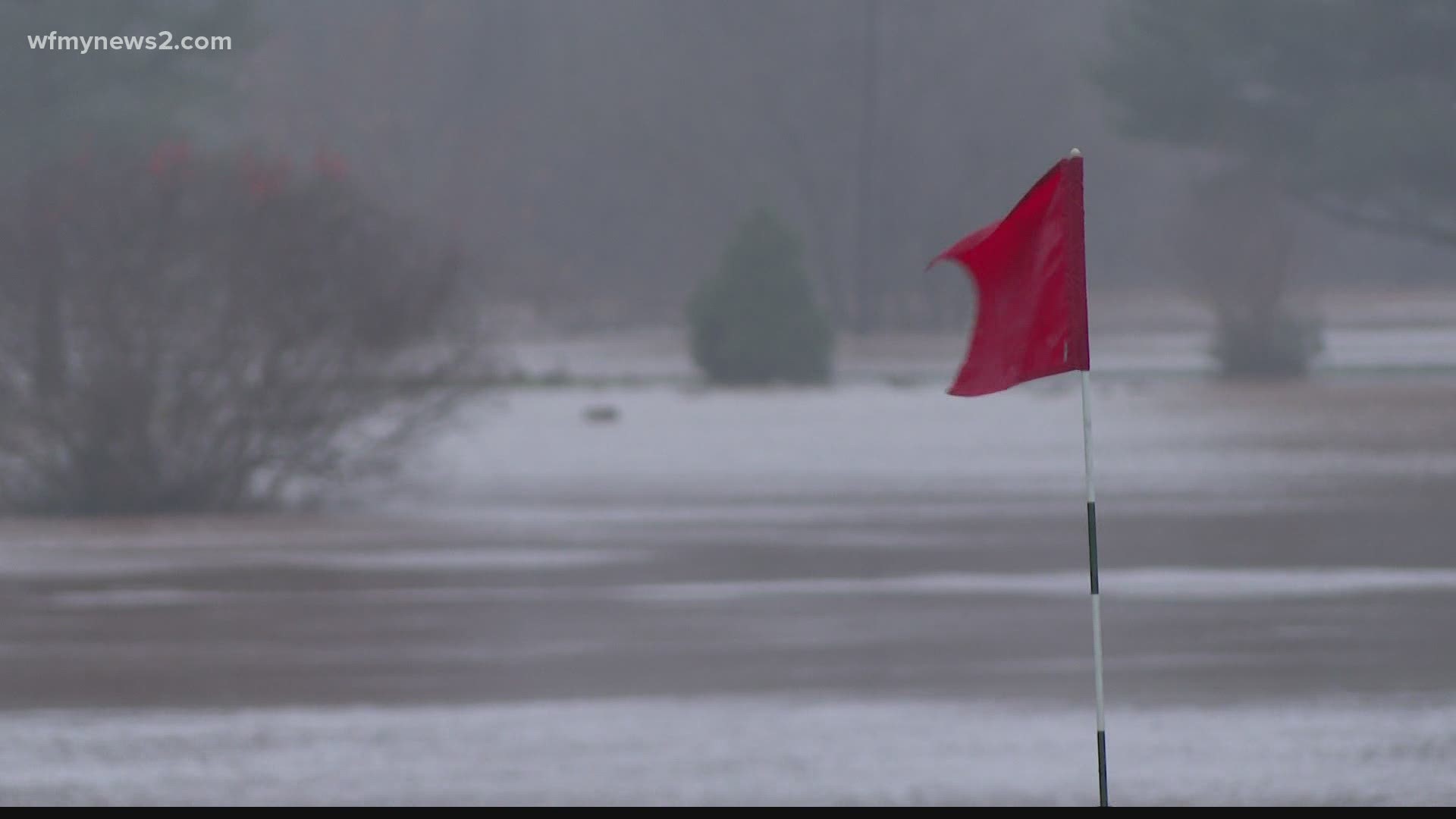 GREENSBORO, N.C. — Follow our live blog for the latest updates after the Piedmont Triad was hit by flooding from tropical rains.

Share your weather photos with WFMY News 2 by texting 336-379-5775. Please only take pictures if it is safe to do so. Be sure to include your name and location in the text.

12:00 p.m. -- Gov. Roy Cooper announced a state of emergency for North Carolina on Friday as the flooding threat from Eta continues. Three people were killed in floodwaters in Alexander County, and crews are still searching for a missing adult and baby. In Wake County, a child drowned in a flooded creek.

9 a.m. -- Tanglewood Festival of Lights was scheduled to open this evening but is now canceled because the drive-through holiday lights course is flooded.

Credit: Tanglewood
Tanglewood was flooded after torrential rain on Thursday. The holiday lights tradition won't be able to open as anticipated for Friday.

11:00 p.m. - Major rivers in our area will continue to rise Friday before receding as all the water drains out from our deluge.

Major rivers in our area will continue to rise into tomorrow before receding as all the water drains out from our deluge. pic.twitter.com/pK58fc3fkz

However, due to flooding and heavy rain, several displays will not be operational. Tanglewood said if circumstances change, they will post on their social media and website.

10:00 p.m. - A golf course is underwater in Eden. You can see in the distance the water is almost over the pin on one of the greens.

A golf course is under all the flooding here. You can see in the distance the water is almost over the pin on one of the greens. @WFMY pic.twitter.com/w28e95Q2BI

9:45 p.m. Greensboro had a discharge of 13,500 gallons of untreated wastewater from the sewer manhole located at 1402 Briarcliff Rd.

According to the city, the discharge occurred for 3 hours Thursday due to high flow rates from heavy rainfall.

The untreated wastewater entered North Buffalo, tributary of the Cape Fear River basin. According to the city, the area was cleaned.

9:15 p.m. - Firefighters rescue more than 100 as an elementary school flooded in Charlotte.

RELATED: 'It's 2020! Would we expect anything else?' | GCS in-person learning kicks off with torrential rain

8:39 p.m.  The American Red Cross of the Greater Carolinas kicked into action Thursday to help those affected by flooding in North Carolina.

According to the Red Cross, they supported three reception centers in Alexander, Mecklenburg, and Forsyth Counties with staffing and meals.

Red Cross said all CDC protocols were followed and responders were equipped with appropriate PPE. Teams also worked in person or virtually with four Emergency Operation Centers, according to a release.

Overnight and into Friday, the Red Cross will continue to work with Emergency Management partners to respond as the need arises.

-Let friends and family know you’re safe. Register yourself as safe on the Safe and Well website.

-If evacuated, return only when authorities say it is safe to do so.

-Continue listening to local news or a NOAA Weather Radio for updated information and instructions.

-Keep children and pets away from hazardous sites and floodwater.

6:00 p.m. Latest on the flooding in Forsyth County

3:30 p.m. - Road closures report. In the Triad area, there are a few road closures related to Thursday's storms so far, according to North Carolina's Traffic & Travel report.

New to today's earlier update: Both directions of traffic have been blocked on SR-1700 in Davidson County due to high severity conditions. This closure is an additional road impacted by weather from today's earlier closures.

More updates can be found on the state's Traffic Incidents map.

2:00 p.m. -- Winston-Salem Fire Department performs another water rescue due to flooding. This time on Yadkinville and Reynolda.

Water Rescue at Yadkinville Rd and Reynolda Rd. E14 and B3. #wsfire .119 pic.twitter.com/M8JwJY1Gwv

12:15 p.m. -- Buffalo Creek is overflowing at Revolution Mill in Greensboro. This is a very flood-prone area.

12:05 p.m. -- Watch this SUV back up as soon as the driver realizes the flooding isn't safe to go through! This is in the Latham Park area of Greensboro.

I came down to this bridge in Latham Park and met Drew Trottier who was out taking a look at the flooding. While we were talking someone tried to drive through the water. Luckily they were able to get away. A good reminder to TURN AROUND, DON’T DROWN. @WFMY pic.twitter.com/Y4CWZDzDiF

12:00 p.m. -- A water rescue is underway at an apartment building in Winston-Salem. Tenants are being carried to safety in a raft as floodwaters surround the building.

11:50 a.m. - Road closures report. In the Triad area, there are a few road closures related to Thursday's storms so far, according to North Carolina's Traffic & Travel report.

More updates can be found on the state's Traffic Incidents map.

9:00 a.m. -- Crews are working to clean up dirt from a construction site which flooded Meadowlark Drive in Winston-Salem. Cleanup is expected to take hours and forced school leaders to switch students at Meadowlark Elementary school to remote learning only.

Right now on Meadowlark Dr in Winston crews are working to clean up the road. Looks like mid from a construction site behind the road washed into the road. @WFMY pic.twitter.com/wEFLfDWswo

8:15 a.m. -- Duke Energy is reporting outages in the following counties:

7:45 a.m. -- Yadkin County Schools is now switching to remote learning for Thursday. There will be no in-person instruction.

Due to hazardous road conditions, today (Thursday, Nov 12) will be a remote learning day for all YCS students  . Out of school time programs will remain open throughout the day. If you have to travel today, please be safe.

7:09 a.m. -- School alert: Brunson Elementary (WS/FCS) students and staff should NOT report to school today. Brunson will switch to remote learning ONLY.

7:00 a.m. -- Winston-Salem traffic alert: Meadowlark Drive is closed between Hundly Road and Beauchamp Road, and will likely be closed for several hours, according to police. Drivers should find another route.

6:45 a.m. -- Meadowlark Elementary School in Winston-Salem will have a remote learning day on Thursday. There will be no in-person instruction, the school announced on its website.

6:30 a.m. -- There's high water on Eastbound Bryan Boulevard between Westridge Road and Holden Road. Greensboro police say traffic is down to one lane. Drivers should find a different route.

6:15 a.m. -- Elkin City Schools is on a two-hour delay for Thursday due to flooding in the area.

⚠️Flooding and Landslides⚠️are causing concerns across western NC this morning as heavy rainfall moves across the area. Please use caution while traveling this morning. Do not drive through flooded roadways. Turn Around, Don't Drown! #ncwx #cltwx pic.twitter.com/FJfWU0fLZR